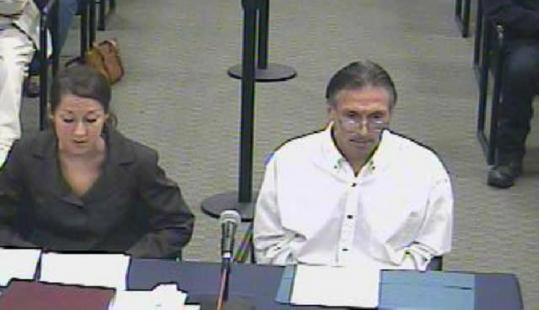 In 2008, Dominic Cinelli told the Massachusetts Parole Board that he was “deeply sorry’’ and a “new and different’’ man. (Parole Board)
By Maria Cramer and Jonathan Saltzman Globe Staff / December 29, 2010

Dominic Cinelli sat before the Massachusetts Parole Board in November 2008 and insisted that he was no longer the heroin addict who shot a security guard during an armed robbery to feed his drug habit.

“I’m new and different,’’ he said in a soft voice. “But I realize that deep inside me there is still that ugliness, and I know that I have to deal with that and control that, and I’m doing a real good job of it.’’

Four months later, Cinelli was a free man. But the ugliness he described resurfaced Sunday when, according to police, he fatally shot a Woburn police officer during the robbery of a Kohl’s department store. Cinelli, 57, was killed during the shootout with the officer, John Maguire, a 60-year-old father of three who was nearing retirement.

Now the unanimous decision to free Cinelli is under intense scrutiny while police and victim advocates question how the Parole Board released a career criminal serving concurrent life sentences.

“I don’t know how any member of the Parole Board justifies that,’’ said Laurie Myers, president of Community Voices, a Chelmsford-based nonprofit that advocates on behalf of crime victims. “He shouldn’t have been out, and now there’s another person dead.’’

Governor Deval Patrick has directed the Parole Board to review the decision, said John Grossman, the state’s undersecretary of public safety and security.

“We’re doing a complete look at what happened, and whatever amount of time it takes to do it right, we’re going to take,’’ said Grossman. The findings will be made public, he said.

Police officials said the review is urgent. “When you hear that somebody who had been serving three life sentences is released on parole and commits another violent crime that causes the death of a police officer, that causes us great concern,’’ said Mark K. Leahy, president of the Massachusetts Chiefs of Police Association and the Northborough police chief.

Cinelli had a lengthy criminal record for armed robberies and assaults, among other offenses, and had been in prison on the life sentences since 1976. In his early years in prison, Cinelli was a chronic disciplinary problem for correction officials and twice escaped and committed crimes. He then professed to have reformed, saying that the deaths of close relatives, including his mother, as well as substance abuse counseling, made him reexamine his life.

During his parole hearing, Cinelli told the board he was no longer a threat to the public, according to a video recording of the one-hour hearing, which the Parole Board released yesterday.

Dressed in a white button down shirt, his graying hair combed neatly, Cinelli said he regretted robbing people to feed his heroin addiction, which he developed when he was 15 years old and living in East Boston.

Cinelli is the son of a Boston police officer who served in the US Navy in World War II, and he described his parents as supportive people who did not deserve the stress he caused them.

“I’d take my eyes out today and put them on the table to change that,’’ he said, sitting next to his young legal adviser, a Northeastern University School of Law student, who was part of a program that trains budding attorneys to represent inmates with life sentences seeking parole.

During the hearing, Cinelli’s uncle spoke on his behalf. No one testified against Cinelli.

“Give him a break,’’ said the uncle, a frail man who used a cane to walk. “That’s all I’m asking. I’m begging. Please give him a parole.’’

In 1985, Cinelli was given a one-day furlough, but did not return and instead committed a series of crimes, during which he shot John Henry, a 60-year-old Mattapan security guard, after robbing a jewelry store in downtown Boston. Henry survived.

Cinelli escaped again in 1986 after pointing a fake gun he had fashioned out of a legal pad at a deputy sheriff, whose gun he then stole.

Mark Conrad, acting chairman of the Parole Board, asked Cinelli to convince the board that his change and humble presence at the hearing were sincere and not manipulative behavior by a devious criminal.

“That was the person who had too much darkness,’’ Cinelli replied. “I can’t even look at that type of person anymore.’’

Cinelli said he now appreciated police officers. “I respect that job,’’ he said.

Patricia Garin, a Boston lawyer who oversees the Northeastern program, was at the hearing.

“When the Parole Board saw him, he’d been extremely successful in the institution for a very, very long time, doing extremely well in the programs he was involved in,’’ she said. “I don’t know what happened to him over the weekend.’’

More than 4,000 people are released on parole each year.

In 2008, about 78 percent of parolees in Massachusetts completed parole supervision without reoffending or violating conditions, compared to the 49 percent national rate, according to federal and state statistics.

“This is a tragedy,’’ Garin said. “But it would compound the tragedy to step back on the successful parole practice that we have. It’s important not to judge the program by this one set of actions. As tragic as they are, it’s newsworthy because it is such a rarity.’’

Milton J. Valencia of the Globe staff contributed to this report. Cramer can be reached at mcramer@globe.com; Saltzman at jsaltzman@globe.com.