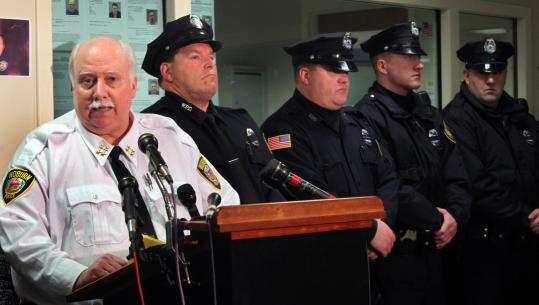 WOBURN — They thought they had planned the perfect robbery, authorities say: One of the men would stand lookout while the other, a violent lifelong criminal armed with a gun, would rob the jewelry section of Kohl’s department store, in the midst of a snowstorm, just before closing time. Both men would don ski masks.

But as they fled the store Sunday night with a duffel bag full of jewelry, police officers arrived. A chase and a shoot-out in the parking lot ensued, killing the alleged armed robber and a police officer, a 34-year veteran whose father had once been police chief here.

The officer was identified yesterday as John Maguire, 60, a husband and a father of three who was nearing retirement. He is the first Woburn police officer killed in the line of duty.

“This officer responded and gave his life for this city and this community,’’ a shaken, tearful Police Chief Philip Mahoney said during a press conference yesterday, surrounded by some of the officers who were with Maguire Sunday night.

“We do not have shootings in Woburn; it’s not that type of community,’’ Mahoney said. “Officer Maguire lost his life defending it right in the middle of Washington Street. It was almost like the Wild West between the two of them.’’

Maguire was struck at least four times, twice in the chest, and was pronounced dead at the Lahey Clinic in Burlington. Authorities would not say whether he was wearing a protective vest or who shot first.

The alleged armed robber, identified by authorities last night as Dominic Cinelli, 57, was hit at least once and died at the scene. A paroled career criminal, he had a history of violent theft: two decades ago he was convicted of stealing $86,000 worth of jewels in a downtown Boston store and shooting a security guard in the chest during a scuffle. As a teenager, Cinelli stabbed a man in the chest, police said. Both victims survived.

In 1986, he pleaded guilty to five armed robberies committed after he failed to return from a one-day furlough from the Worcester House of Correction. According to a 2008 Parole Board decision, Cinelli was serving three concurrent life sentences.

The Parole Board released him in March 2009, saying the lifelong drug and alcohol abuser had completed several prison treatment programs for substance abuse and alternatives to violence and earned his GED.

On Sunday, with 19-year-old Scott Hanright of Wakefield acting as lookout, Cinelli went into the store, where he threatened and beat employees, said Marian Ryan, a Middlesex prosecutor. He came out of the store with a duffel bag, “spewing jewelry into the parking lot.’’

Police began a foot chase, and at one point Maguire, the second officer to arrive, exchanged gunfire with Cinelli.

Hanwright, who has no criminal record, was arraigned in Woburn District Court yesterday on charges of murder and attempted robbery. He was ordered held without bail.

A third man, Kevin Dingwell, 51, of Wakefield, was charged with being an accessory after the fact. Police tracked Hanwright to Dingwell’s car just after the shoot-out.

Authorities said that Hanwright, after removing his mask and trying to blend in with the crowd after the shooting, called Dingwell to pick him up, but it was not clear whether Dingwell was aware of the robbery. The two live in the same Wakefield apartment building, according to court records. Dingwell pleaded not guilty and was ordered held on $1,000 cash bail.

Maguire’s death brought an outpouring of sympathy from law enforcement officials across the state. Several officers saluted Maguire’s body as it was taken from the hospital yesterday morning. In Woburn, officers wore black bands around their badges, and the flag outside the police station was at half staff.

Dozens of police officers stood for hours at Woburn District Court waiting for yesterday’s arraignments of Hanwright and Dingwell.

“The city of Woburn is deeply saddened by the loss of one of its own,’’ said Mayor Scott Galvin. “I know that all city officials, city employees, and each and every resident of our city that Jack served would join me in extending our thoughts and prayers and offers of support to his family, and to his extended family of brother and sister police officers of the city of Woburn.’’

The last fatal shooting of a police officer in the line of duty in Massachusetts occurred in 1999 in Westminster. Patrolman Lawrence Jupin fell into a coma and died three years later.

Revere police Officer Daniel Talbot was shot and killed while off duty in 2007.

Outside the Maguire home in Wilmington yesterday, a police officer told a reporter that the family was not able to speak.

Neighbors described Maguire as the type to always offer a helping hand, who loved to throw barbecues. “He always had a big gang of people in his yard, whether it be family or neighbors, and if he was having one group over and you happened to walk by, he would yell, ‘Hey, we’ve got a few people over, come on,’ ’’ said Michael Robillard, a 57-year-old neighbor.

Ryan said that the robbery had been planned, even rehearsed, and that it was timed to take place when Kohl’s employees would be removing jewelry from displays as part of the end-of-night cleanup.

“This is a situation where clearly individuals took advantage of the blizzard, the reduced amount of people on the road, for greed,’’ she said.

During the arraignment, Chief Mahoney struggled to hold his grief yesterday, at times burying his face in his hands. Later, he said that it was the first time Maguire had used his weapon in the line of duty during his 34 years on the force.

“We can’t believe Jack is not with us,’’ Mahoney said, his voice shaking. “We’re all in mourning.’’

Correction: Because of incorrect information provided by State Police, an earlier version of this story misspelled the name of a suspected lookout during a department store robbery in Woburn in which a police officer and an armed robber were killed. The suspect is Scott Hanright.