To the end, championing others

DeNucci wraps up 24 years as auditor 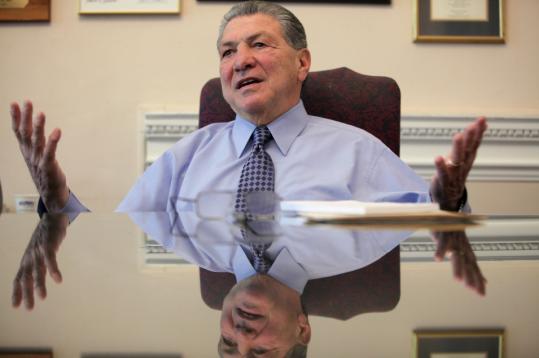 When he leaves the State House next month, state Auditor A. Joseph DeNucci will close the show after a 34-year run on the Massachusetts political stage that has been as improbable as it was long.

It is a story that may never be duplicated. In many ways, he is the last of a breed.

The product of a working-class upbringing in Newton who entered politics after a long and successful professional boxing career, DeNucci, with only a high school education and some college courses, earned a reputation in the Legislature as a big-hearted champion of the vulnerable in society and for having a steady hand as the longest-serving auditor in Massachusetts history.

“God’s been good,’’ DeNucci said during an interview in his State House office.

DeNucci announced in November 2009 that he would not seek a seventh four-year term, but the decision was made earlier, at a family gathering at a Boston restaurant to celebrate his 70th birthday. Of the 16 close relatives present, only one thought he should run again, DeNucci said.

He has no specific plans for retirement. His wife of 48 years, Barbara, hopes it means more time with their 14 grandchildren at their second home in Yarmouth.

Angelo Joseph DeNucci is of the old school and makes no apology for that. He is the product of a culture that prized helping those around you, which has permeated Massachusetts politics for as long as anyone can remember, but is under attack now.

He got his first job at the State House, as a page and later a court officer in the House, after John F. Thompson, the “Iron Duke,’’ who would later become House speaker, saw him win the Golden Gloves in Lowell when DeNucci was 16.

A year later, DeNucci wanted to turn professional, but was a year shy of the age requirement of 18. “I got a senator to get a certificate that said instead of 1939, I was born in 1938,’’ he said.

Against the wishes of his father, Sandy, he became a prizefighter, training at night, and logged a record of 54 wins, 15 losses, and four draws, according to The Ring magazine. A middleweight who ranked as high as fifth in the world, when boxing was a much bigger sport, DeNucci fought some tough men and beat more than his share. He had more bouts at the old Boston Garden, then a major boxing venue, than any other fighter.

In 1961, DeNucci fought Joey Giardello, later the world champion, to a draw. In 1972, he lost two split decisions, 25 days apart, to Emile Griffith, a former world champion. “I was robbed,’’ DeNucci wrote on a signed photo from the first bout, which hangs in the anteroom of his office. The next year, he hung up his gloves after 16 years as a professional. He was 33 and ready to start his second career.

DeNucci first won a House seat in 1976. He stunned many colleagues three years later when he rose unexpectedly to respond to harsh stereotyping that disturbed him during a debate on a bill to ban discrimination against gays in employment, credit, and housing.

“What I did came from here,’’ DeNucci said, pointing to his heart.

At times in an hourlong interview, DeNucci struggled to recall names and details, but he remembered why he was moved to speak that day. “I was stereotyped as an ex-prizefighter and Italian-American,’’ he said.

DeNucci made a lasting mark in six years as House chairman of the Joint Committee on Human Services and Elderly Affairs. Linda M. Luongo, formerly his chief legislative aide and later first deputy auditor, has a summary of his legislative achievements: more than 100 laws, including a landmark 1983 statute requiring social workers to report evidence of serious child abuse to authorities.

“Joe didn’t start with an ideological bottom line of being liberal or conservative,’’ Luongo said recently. “His view was that kids shouldn’t be hungry, and people shouldn’t be homeless or need an address to get emergency assistance.’’

To this day, DeNucci considers the highlight of his career to be those years helping people whose circumstances he identified with. “I grew up the hard way,’’ he said. “My father was a janitor at the YMCA, and he worked at three or four other places, washing and waxing floors, and I helped him.’’

“He was a superb legislator in every way,’’ said Michael S. Dukakis, former governor, who never held it against DeNucci him that he supported rival Edward J. King in their epic 1982 rematch.

When John J. Finnegan announced in early 1986 that he would not seek reelection to the low-profile job of auditor, DeNucci, knowing his dream of becoming House speaker was out of reach, jumped into the race, winning by what would be the first in a series of comfortable and then wide margins.

Over the next 24 years, DeNucci’s office conducted roughly 6,000 audits that his staff estimates disclosed more than $3.5 billion in excessive spending, missed revenues, and opportunities for savings. Overseeing a staff now numbering about 300, DeNucci made a priority of “performance audits’’ of agencies and vendors, giving special attention to those that delivered human services.

“He maintained an office that was fair and accurate and had no real political agenda,’’ said Secretary of State William F. Galvin, who served with DeNucci in the Legislature.

DeNucci took flak last summer when he awarded 5 percent pay raises to his staff at a time of state budget shortfalls, cutbacks, and wage freezes. An aide defended the raises at the time, saying employees had not had a pay increase in almost four years.

Political opponents sometimes cited DeNucci’s lack of formal financial training. His response was that he didn’t need to be an accountant to be a leader. “I hired the right people for the right places,’’ he said.

He was also accused of being partial to public employee unions when he rejected some privatization efforts in the 1990s.

“He’s a great guy, a warm guy, but he didn’t exploit the full potential of the office,’’ said James Stergios, executive director of the Pioneer Institute, a fiscally conservative think tank. “He never took the opportunities for savings very seriously and took the side of the unions.’’

DeNucci’s spokesman, Glenn Briere, said the office followed the law and gave its blessing to 12 of 15 privatization proposals.

A full-time team of six auditors conducted 22 audits of the Big Dig, identifying what his office estimated to be almost $600 million in wasteful spending and design problems. In 2000, when Big Dig officials said the project’s cost had risen from $10.8 billion to $12.2 billion, DeNucci was scoffed at when he said the true cost would ultimately be $15 billion. That’s the official price tag today.

The Big Dig audits were part of a memorable feud with the project’s chief executive, James Kerasiotes, whom DeNucci once likened to the Iraqi dictator Saddam Hussein. During an earlier dustup, Kerasiotes had called DeNucci “a bum.’’

In an expletive-filled phone call in 1995, DeNucci accused Kerasiotes of “dropping a dime’’ that resulted in a Boston Herald exposé that found DeNucci, when his official schedule said he was in his office, was often away from work. Kerasiotes denies it.

Regardless, all is forgiven today. DeNucci said they were two strong-willed men doing what they thought was right. “It was never personal,’’ he said.

“At times he thought I was pushing the envelope a little bit, and we got past it,’’ Kerasiotes said. “I always admired and respected him. I still do.’’

One blemish on DeNucci’s career is a pending complaint by the State Ethics Commission. It says he directed his office in 2008 to hire his 75-year-old cousin for a $40,545-a-year job that did not exist and for which he was not qualified.

DeNucci’s lawyer, Thomas R. Kiley, said state law gives constitutional officers the power to hire whomever they deem fit, as long as they are not members of their immediate family. “Joe is in a sense being scrutinized for a practice that was absolutely the norm under a statute that has not been changed since he took office,’’ Kiley said.

DeNucci has never been shy about playing the patronage game. “We all did it,’’ he said. “It was about helping people; some I knew, some I didn’t.’’

One he knew well was Leonardo Liotta, better known by his professional nom de guerre, Tony DeMarco, the former welterweight champion from the North End and a DeNucci boyhood idol. In 1983, DeMarco wanted to return to Boston after living for years in Arizona. DeNucci helped him land a job as a court officer at the State House.

“Hey, this is patronage,’’ DeNucci told a Globe reporter at the time. “I’m trying to help a friend.’’

He rues current attitudes toward old ways of politics. “Today,’’ he said, “it’s like it’s a crime.’’

Brian C. Mooney can be reached at bmooney@globe.com.