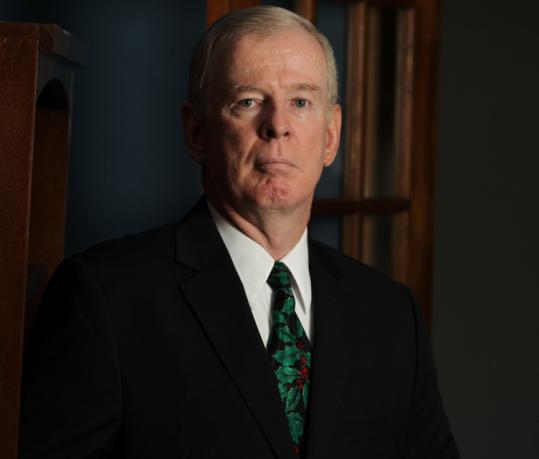 Irene Wood tries to enjoy the Christmas season, but this year the 73-year-old suburban New Jersey woman said she was having a “very difficult time just keeping my act together.’’

Ten years ago today, her 29-year-old son, Craig Wood, was among seven employees of in Wakefield who were gunned down by a co-worker in the worst mass murder in Massachusetts history.

The murders shattered Irene Wood’s family and shook her faith. A lifelong Roman Catholic, she stopped attending church afterward because, she said, the weekly Mass offered no explanation for the slayings.

“About three years ago, I decided it wasn’t working that way either, so I figured I’d better go back and at least have somebody looking over my shoulder,’’ she said. “That’s all you have left.’’

The emotional wounds left by Michael McDermott — the 42-year-old computer tester who killed co-workers with an AK-47 and a pump-action shotgun — are still raw for victims’ relatives and for employees who survived the rampage.

McDermott was convicted in 2002 of seven counts of first-degree murder. The Middlesex County jury rejected his claim of insanity and his testimony that he believed he was killing Adolf Hitler and his generals at the direction of an archangel. To many survivors and relatives of the victims, McDermott’s accounts of time travel to a Berlin bunker were the final insult.

Despite the passage of time, Stephen C. Doherty, the now-retired Wakefield police chief who rushed to the company minutes after shooting erupted in the usually placid town, said his memories of the carnage surface almost every day.

Ordinary things can trigger vivid recollections, he said — a scent, the way an office door opens. “It’s an unforgettable event,’’ he said. In no small part because of the Edgewater murders, Doherty now works as a consultant to companies across the country seeking to prevent workplace violence.

But the murders represent more than the deadliest crime in state history.

The case also occupies a special place in the evolution of police investigations in Massachusetts. It was one of the first high-profile murder cases in which investigators persuaded the courts to let them search the computers of a suspect for evidence, a common practice today.

As a result of the seizure of McDermott’s home computers, investigators determined that he had surfed the Internet in the years before the murders for articles about faking insanity. He had also bought a book called “Clinical Assessment of Malingering and Deception,’’ a reference book used by psychiatrists.

“We were really at the beginning stage of doing this kind of work,’’ John A. Grossman, the state’s undersecretary of forensic science and technology, said of such searches. At the time of the McDermott investigation, Grossman headed the state attorney general’s recently established computer crimes division, which had a laboratory that analyzed the defendant’s computers.

Fairly or not, the Edgewater massacre also fueled public alarm over random workplace violence. Since the 1980s, when a series of shootings at US post offices galvanized such concerns, Americans have been rattled by rampages committed by disgruntled workers, said James Alan Fox, a criminology professor at Northeastern University.

The incidents, Fox said, led to the security desks that are ubiquitous in workplaces and spawned a cottage industry of experts who advise companies on how to prevent violence, which Fox considers of dubious value. The violence has also resulted in widespread news reports, based on figures from the Bureau of Labor Statistics, suggesting that almost 1,000 American workers are murdered each year by vengeful co-workers.

In fact, he said, the vast majority of workplace homicides involve robberies such as taxicab holdups and convenience store stickups, assaults on police officers, and domestic disputes that spill over into the office. Fewer than 100 people are killed each year by disgruntled workers and former employees, and most of those episodes, unsettling as they are, involve only one victim.

“When you calculate the risk, it’s extremely small,’’ he said.

That, of course, is of little comfort to people whose lives were shattered by McDermott.

Around 11:10 on the frigid morning of Dec. 26, 2000, McDermott, nicknamed Mucko, rose from his cubicle carrying the AK-47 and shotgun and headed to the human resources office, according to authorities. Prosecutors say he was angry that the company was complying with an IRS order to withhold part of his wages to cover a debt of $5,500 in back taxes.

He entered a reception area and repeatedly shot a woman who was filling in as a receptionist, authorities said. Over the next few minutes, he coolly killed six other workers. Some of his victims only had time to say a couple of words: “Mike, no,’’ and, “Mike, why?’’

In addition to Wood, those killed were Cheryl Troy, 50, of Beverly; Janice Hagerty, 46, of Stoneham; Louis Javelle, 58, of ; Jennifer Bragg Capobianco, 29, of Brighton; Paul Marceau, 36, of Melrose; and Rose Manfredi, 48, of Lexington.

Jonathan Land, the company’s vice president of consulting, testified at trial that he stepped into the hallway with a co-worker when they heard the gunfire and saw McDermott walking toward him with the butt of the rifle resting on his right hip, the barrel in the air. Land returned to his office, a few steps up on the mezzanine level, but McDermott killed the co-worker.

Moments later, all of Wakefield’s officers on duty at the time — seven or eight, including Chief Doherty — rushed to the scene. Three of the officers and Doherty burst through the front door with their guns drawn and saw McDermott sitting in a chair in the lobby, Doherty said. Two bodies lay nearby.

McDermott had the AK-47 wedged between his legs, the barrel pointing at the ceiling, Doherty said.

Officers shoved him to the ground and handcuffed the large man, who weighed more than 320 pounds, said Doherty. His only comment, recalled Doherty, was, “I don’t speak German.’’

Not long after the murders, Middlesex District Attorney Martha Coakley, who was on the team that prosecuted McDermott and is now attorney general, held a series of meetings with relatives of the victims. Although many kin of murder victims are understandably distraught, she said, these families were devastated by what she called “a random attack that none of them understood and I’m sure still don’t.’’

At trial, McDermott’s lawyer, Kevin J. Reddington, of Brockton, called psychiatrists who testified that his client suffered from schizophrenia. Reddington argued that McDermott had slid into a terrifying “abyss of insanity.’’ But the jury rejected those claims and convicted McDermott of all the murders. He received seven consecutive sentences of life without parole.

Reddington, who says McDermott sends him Christmas cards from prison each year, still disagrees with the verdict.

“I always felt that Mr. McDermott was, and is, a very sick man, and there’s just no winners anywhere,’’ he said in an interview last week. “It was just a complete and utter tragedy.’’

Land left the company after the trial and now works for a software company and lives in Bedford. He and his wife have eight children. He still gets a knot in his stomach when he hears about random violence, he said; he knows better than most people how suddenly and inexplicably violence can erupt.

But he isn’t fearful, he said. And he treasures life more than ever.

“You realize how much you have,’’ he said, “when you see what other people have ripped away so quickly.’’

Jonathan Saltzman can be reached at jsaltzman@globe .com, Travis Anderson at Tandersen@globe.com.