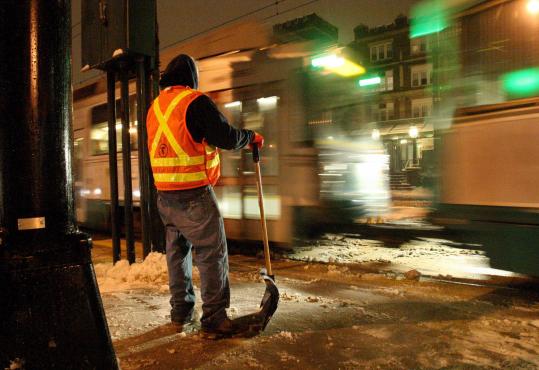 When commuter rail rider Don Alcombright of Kingston went to sleep last Monday night, the snowstorm that dumped several inches on the South Shore was already over. But when he got to Halifax the next morning to catch a train to South Station, he found a layer of snow on the platform and parking lot, and he watched a fellow rider slip and fall as she attempted to board the train.

“In all seriousness, this is beyond ridiculous,’’ said Alcombright, who e-mailed the Massachusetts Bay Commuter Railroad Co. — the company hired to operate commuter rail for the MBTA — and included a photo that he said he took with his iPhone at about 7:40 a.m. Tuesday from the platform, showing an unsanded, unshoveled layer of snow an inch or two thick. “Shame on everyone involved.’’

Alcombright said he knows snow-clearing crews can’t be everywhere in a storm, but he thinks snow is too often left coating parking lots and platforms hours after the flakes have stopped falling. He said he has spoken with MBCR customer service about the issue in the past, to little effect, but decided this time to write a strongly worded e-mail and copy it to the media after witnessing the fall, which did not result in serious injury.

It worked. Sort of. Alcombright received an immediate response from customer service manager Linda Dillon, assuring him that crews had been out clearing all Old Colony Line stations until after 10 the night before and would strive for “pristine condition’’ on the return trip.

Wednesday night it snowed again, and Thursday morning Alcombright found the Halifax Station to be “completely crystal clear.’’ But as his train passed the next stations on the line, he noticed more snow on platforms. “It was almost like they were just trying to make the complainer happy,’’ said Alcombright, who e-mailed more pictures.

“MBCR’s snow clearing operations are designed with the top priority being the protection of passengers and their safety,’’ Farmelant said by e-mail, adding that the photos appeared to show “a small coating’’ reasonable for the morning after a storm.

Farmelant said the parking lots are cleared by a separate crew from the platforms and are done by LAZ Parking, the MBTA’s parking vendor. But MBCR is required to inspect their work and will coordinate more closely with them in the future, he said.

The e-mail chain reached the MBTA’s general manager, Richard A. Davey, who called Alcombright personally on Christmas Eve to thank him “and to assure him that steps will be taken to strengthen snow removal efforts at commuter rail stations and parking lots,’’ MBTA spokesman Joe Pesaturo said.

Overcharge for transfer tracked to bad battery on bus fareboxAfter I wrote about Edgar Dworsky, a Somerville consumer advocate who noticed that he was mysteriously overcharged by the MBTA for a bus-to-subway transfer, reader Hope Wallace Hill decided to keep an eye on the farebox display when she tapped her CharlieCard for a transfer ride the morning of Dec. 15, when she rode the 39 bus to connect to the Green Line.

Instead of being charged $1.25 for the bus and 45 cents for the transfer, Wallace Hill was charged the full $1.25 plus $1.70. When she reached her destination, North Station, she tracked down a T employee who helped her look up her CharlieCard history. Instead of showing a transfer well within the two-hour window required for the discount, the computer claimed she had boarded the bus at 3 a.m. and transferred at 9:40 a.m. — impossible, because there is no service at 3.

“This is not a matter of rounding up 30 seconds; the fare box on the bus was off by 6 hours,’’ Wallace Hill wrote. “I think this has happened to me in the past, but this was [the] first time I thought to check.’’

When I mentioned the situation to the MBTA general manager, Richard A. Davey, he sounded concerned and asked for details. “If there’s a glitch or a loophole somewhere, for whatever reason, I want to know,’’ he said.

With Wallace Hill’s permission, I forwarded her e-mail to Davey, who sent it to the top four people at “Team Charlie,’’ responsible for the automated fare system. With the rider’s CharlieCard number, they determined that the problem was not a systemwide computer glitch but a bus-specific issue.

Eventually, they tracked down the bus Wallace Hill rode and discovered that inadequate maintenance of a backup battery on the farebox computer caused the bus to get the time wrong — making it impossible for riders who began on that bus to get a discounted transfer.

A Team Charlie official said by e-mail that the computer clocks will now be checked routinely to prevent a reoccurrence.

As of Friday, Wallace Hill said she had not yet heard from the T nor received a refund but was glad the situation was apparently resolved.

Three Mass. groups win grants to upgrade transit to parksIt may not be the first thing that comes to mind when people think of the Federal Transit Administration, but last week the agency released grants from a program to improve public transit at or around public parks. The $27 million released nationally included three local grants.

The Salem Maritime National Historic Site won $250,000 to spend on a passenger ferry boat that will connect downtown Salem with Bakers Island, home to a historic lighthouse. The ferry will provide the first public access to the island and lighthouse in over a century.

And the Thacher Island National Wildlife Refuge, off the coast of Rockport, is getting $79,042 to buy a replacement ferry boat for visitors.

The money comes from the Paul S. Sarbanes Transit in Parks program, which the transit agency and the federal Department of Transportation administer with the Department of the Interior and Forest Service.

The award recognizes one engineer among the organization’s 700 public and private-sector members annually for exceptional technical accomplishments or use of new concepts. Tramontozzi won for innovations that saved time and money in the Accelerated Bridge Program and other projects.

Tramontozzi worked at the federal and municipal levels, serving as Mayor Thomas M. Menino’s first transportation commissioner, as well as in the private sector, before joining the state in 2007.

Eric Moskowitz can be reached at emoskowitz @globe.com.