In 13 years, he made quite a splash

Presence of Kennedys’ beloved canine was felt in Washington 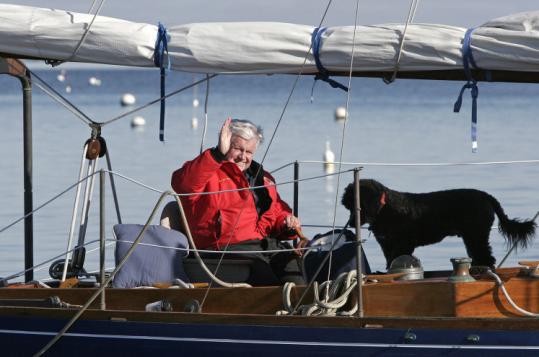 Edward M. Kennedy and Splash enjoyed the late senator’s last sail of the season off Cape Cod in 2007. (Jennifer Longley for The Boston Globe)
By Michael Levenson Globe Staff / December 24, 2010

He was a published author. He inspired a president. He barked at members of Congress and foreign dignitaries.

Splash, Vicki and Edward M. Kennedy’s beloved Portuguese water dog and a constant presence at the senator’s side, bounding and romping through the halls of power, has died.

The death of the 13 1/2-year-old curly-haired canine is eliciting fond tributes, fit for the passing of such a famous fixture of official Washington. Splash, after all, hobnobbed with Elton John, leapt around the Oval Office, and once growled at Joe Biden and Paul Wellstone when the senators wouldn’t stop talking during a Democratic caucus meeting.

Edward Kennedy, who died of brain cancer in August 2009, was famously devoted to Splash. The lawmaker with a booming voice cooed like a baby around the dog, whether sailing with him off Cape Cod or holding him by his feet during an important meeting in his Capitol Hill office. Kennedy was especially fond of starting his mornings by hitting tennis balls off a racquet for Splash to fetch.

“I like to think that he and his Master are playing tennis ball fetch again tonight,’’ Vicki Kennedy wrote in an e-mail announcing Splash’s death.

Edward Kennedy bought Splash from a breeder because his son, US Representative Patrick J. Kennedy, is allergic to dogs and Portuguese water dogs are considered hypoallergenic. He and Vicki Kennedy fell in love with Splash’s boundless vim, and later purchased two more Portuguese water dogs, Sunny and Cappy.

“He loved those dogs so much, and they were just so much a part of his life,’’ said Philip W. Johnston, a friend of the Kennedy family and former chairman of the state Democratic Party.

The dogs were also a disarming presence for many who met the legendary senator. Johnston recalled once leading a nervous group of community health center directors to meet with Kennedy in his ornate Senate office, decorated with family memorabilia.

“They were expecting some formal meeting with the senator, and then he comes in with the dogs jumping and yelling and having a great time,’’ Johnston said. “They were enthralled.’’

Vicki Kennedy called Splash “the best dog in all the world’’ and one “with many talents and accomplishments.’’

“He hated squirrels, but he loved to chase them,’’ she wrote. “He also loved to sail. And he could bark with the best of them, especially if you were a Republican or even a Democrat [other than his Master] who talked too loudly or for too long.’’

Splash was undoubtedly the most famous dog in the storied family.

Paul Sarbanes, the Maryland Democrat, was so charmed when Splash barked at Biden and Wellstone that he made the dog an honorary member of the Senate Democratic caucus. President George W. Bush honored him with the gift of a rawhide dog bone. “From Barney to Splash,’’ the president’s note read.

In 2006, Splash, with some help from his owners, wrote a children’s book, “My Senator and Me: A Dog’s-Eye View Of Washington, D.C.,’’ which chronicled his experiences in the Capitol — riding the tram, sitting in on committee meetings, and following Kennedy everywhere except to the Senate floor, where dogs are prohibited.

Splash was widely credited with inspiring President Obama’s decision last year to accept as a gift from Kennedy a Portuguese water dog of his own, which the president’s daughters, Malia and Sasha, named Bo.

Kennedy had been quietly lobbying the president to choose a Portuguese water dog for his family, a campaign the senator tacitly acknowledged during a period of fevered speculation about which breed the Obamas would choose.

“We love our Portuguese water dogs, and if the first family decides to go in that direction, we know they’ll fall in love, too,’’ Kennedy said in a statement in February 2009.

Johnston said yesterday that he will always remember Kennedy with Splash, Sunny, and Cappy at his side.