After their land is deemed commercial, not agricultural, longtime owners wonder if town is trying to drive them out 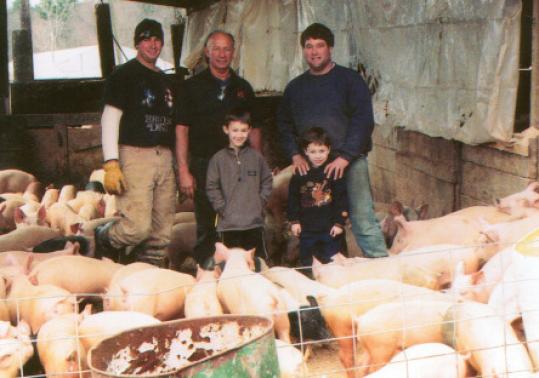 The Cave family surrounded by a few of the farm's pigs. (Jennifer Nagle)
By Katheleen Conti Globe Staff / December 23, 2010

That question is being debated by the owners of Krochmal Farms and Wilmington officials, who have been tangled in a two-year legal dispute over the type of operations on the site, and whether it should be operating at all.

The Cave family, four-generation owners of the crop and livestock farm that straddles the Tewksbury-Wilmington town line, are mystified by recent decisions made by Wilmington officials, which they believe have one overarching purpose — to drive them out of town.

The family says the town wants to make room for potential development that would come from the completion of a new federally funded interchange on Interstate 93, expected to be finished in about 2016.

In anticipation of the interchange and the development it could attract, Wilmington, Tewksbury, and Andover have been working on a zoning code that would apply to about 700 acres at the interchange location that is currently landlocked — not accessible by road — in the three communities.

A portion of Wilmington’s land that could be zoned for a business park in cludes Krochmal Farms, which is among the few buildable parcels in an area filled with wetlands.

Jennifer Nagle, the longtime girlfriend of John Michael Cave, who operates the farm with his father John C. and his brother Gregory, accuses Wilmington officials of painting a bulls-eye on the farm.

Wilmington officials say they resent the innuendo and deny any ulterior motives. Both sides accuse the other of not being forthcoming with information.

“The only thing we’ve asked them to address is to try to mitigate the odor,’’ said Wilmington Town Manager Michael Caira. “The town has absolutely no interest in taking over that property. That’s only come out of Ms. Nagle’s mouth.’’

As is the case with many conflicts involving farms in a growing suburbia, it all begins with the smell. In December 2008 the Cave family received an order from Tewksbury to stop operating a piggery there in response to numerous complaints of strong manure odors, Nagle said.

Krochmal Farms is one of the top two largest piggeries in the state, according to Catherine Williams, spokeswoman for the state’s Department of Agricultural Resources. Nagle said they have about 1,000 pigs.

The Caves acknowledged the stench, which comes from a newly installed holding tank that confines the pig manure to one place — an environmentally sound practice, but one that intensifies the smell, Nagle said. The family has since installed an odor abatement system, resulting in the withdrawal of the town’s cease order, Nagle said.

But shortly after receiving Tewksbury’s order, Nagle said, the Caves received an identical one from Wilmington, even though there are no pigs on the 80 acres there.

The Wilmington portion of Krochmal Farms contains about 225 cattle, corn and pumpkin crops, and compost piles composed of materials such as manure, feed waste, leaves, and brush, Nagle said.

Caira said the town’s actions are in response to “voluminous’’ complaints to the Board of Health about odors they say still permeate the landscape, and which have, “affected the quality of life of the residents of Wilmington.’’

The Caves appealed the order, which allows them to continue to operate the farm until the court process is complete, said their attorney, Frank DiLuna of Murtha Cullina LLP in Woburn. DiLuna said the first court hearing could come sometime next year.

While the court decides whether Krochmal Farms is a nuisance, Wilmington has made a decision on its status as a farm. After witnessing the size of the compost operation, approximately 4 acres handled by a private company with large construction trucks, town assessor Humphrey J. Moynihan reassessed the property last year as a commercial operation instead of as an agricultural use, which entitles them to a significantly lower tax rate.

“I literally called the town assessor’s office and said, ‘There’s been a wicked bad mistake. I don’t know what you guys did,’’’ Nagle said. “The woman that I spoke with said, ‘Actually, that isn’t a mistake.’ . . . From our side of the fence, it looks like they’re trying to push us out financially.’’

The Caves appealed the reassessment to the state Appellate Tax Board, but no hearing date has been set.

Nagle said she is hopeful that the board will agree with the state Department of Agricultural Resources, which, in a letter to Moynihan, stated that Krochmal does fit the criteria for a farm designation, despite the commercial nature of the compost operation.

Moynihan said he finds it “a little offensive’’ each time he hears his decision is intended to oust Krochmal Farms from Wilmington.

“I categorically refuse to accept that I’m somehow going out there reassessing them because I want them out of town. That is just ridiculous,’’ he said. “When I saw the size of the operation I realized we needed to change their value for them to be paying their fair share of taxes.’’

Carole Hamilton, Wilmington’s planning and conservation director, who is working with her counterparts in Tewksbury and Andover on the I-93 interchange zoning code, confirmed that Krochmal Farms is included in the code’s area, but that it’s just as a matter of protection for the town in the event that the property is ever sold and developed. The zoning code, she said, is a blueprint for future developers.

“Nowhere has there been any discussion of a public taking [of properties along the interchange]. Nowhere,’’ Hamilton said. “There’s no effect as long as [the Cave family] chooses not to take part. . . . They can stay there for another 80 to 100 years. Nobody is forcing anybody to do anything.’’

For Nagle and the Cave family, the cease-and-desist order, reassessment, and inclusion in the zoning code seem too sudden and coincidental.

“We just want to know what they want,’’ Nagle said. “We tell them ‘we’re in compliance, you can’t touch the farm,’ and they just won’t answer us.

“It makes us even more skeptical, not to sound like a conspiracy theorist, but there’s no other way to look at it.’’

Katheleen Conti can be reached at kconti@globe.com