THIS STORY HAS BEEN FORMATTED FOR EASY PRINTING
Lynn, Revere

Complaints of rats are on the rise 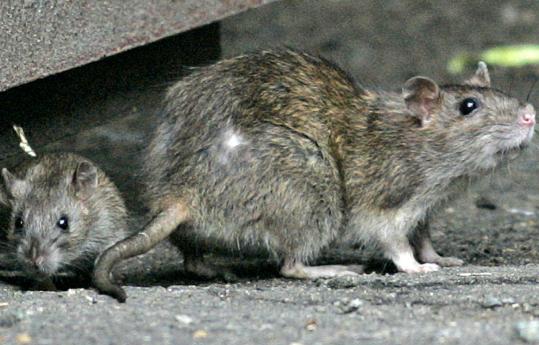 Some exterminators think rats may be gravitating toward foreclosed properties, where they can live undisturbed. And in many cities, tight budgets are complicating eradication efforts. (George Rizer/Globe Staff/File 2007)
By G. Jeffrey MacDonald Globe Correspondent / December 23, 2010

Rat problems are increasing in pockets north of Boston, and tight budgets are hampering efforts to eradicate them.

Complaints about rats in Lynn have been rising steadily for two years. The Lynn Inspectional Services Department fielded 835 complaints in fiscal 2010, up from 756 in 2009 and 516 in 2008. Neighborhoods across the city continue to be affected, with highest concentrations in areas that have many multifamily homes, according to Lynn health director MaryAnn O’Connor.

In nearby Revere, rat complaints during the warm months normally number around 10, but this year the city fielded about 30 complaints from residents, according to Revere health agent Nicholas Catinazzo. Revere has recently been fighting rat infestations in two neighborhoods, one off Winthrop Avenue and another off Malden Street, he said.

“I’ve been the health agent here for 11 years, and I’ve never seen it as bad as this year,’’ Catinazzo said.

Though rats can carry disease, neither Lynn nor Revere has linked any human health problems with the presence of rats, according to local health officials. Even so, rats pose a nuisance that residents want to stop before it gets any worse.

Theories on why the rat population is growing, especially in residential neighborhoods, focus on environmental and economic factors. Catinazzo said the rainy spring gave rats hospitable environments to breed in the area’s marshes. A tough economy means some landowners are letting properties fall into disrepair, and rats can take advantage of increased access to garbage and shelter. Exterminators wonder if rats are flocking to the region’s growing stock of foreclosed properties, where they can live undisturbed.

“A lot of foreclosed properties have a lot of rodent issues, and I’ve been seeing rodent calls everywhere,’’ said Mark Ridout, owner of Bugs R Us, a pest control company in Billerica. “We see businesses shut down. Nobody tends to manage those properties. Rodents move in. They tend to multiply and start seeking out harborages. Unfortunately, it’s residential homes that they tend to overpopulate.’’

Not all cities north of Boston are reporting a rise in rat problems. Health officials in Lowell, Haverhill, and Salem said they have seen either no increase or a modest decrease in rat complaints this year. Calls to the Lawrence Health Department were not returned.

But in cities where populations are on the rise, strained financial resources — both private and public — are creating a challenge.

Lynn, for example, has been cracking down on the garbage problem by issuing a $300 fine to second-time offenders who don’t put all their trash in barrels with lids. But cash-strapped residents have protested that the fines are excessive. Now the Lynn City Council is considering a proposal that would reduce the second-time offender fine from $300 to $50. As much as the city needs to encourage better trash management practices, it can’t saddle residents with an excessive burden, O’Connor said.

“It’s really the landlord’s responsibility to make sure their tenants do dispose of their trash properly, and don’t dump it all in the backyard or throw it off the balconies,’’ O’Connor said. “It’s the landlords who need to step up.’’

Other cities are facing limits to what they can do. In Revere, city employees no longer bait private properties in a bid to clear rat burrows because of liability concerns, Catinazzo said. The city still boards up abandoned properties when necessary, Catinazzo said, but the most municipal employees will do is order a property owner to bait his or her property.

In Lawrence, owners of large apartment buildings must use a private trash collection service, while residents of smaller buildings must use city-owned garbage cans with lids. But rodent problems in rental properties track primarily with tenant habits, such as leaving garbage in a hallway for days or failing to dispose of food scraps properly, according to Steve Araiza, organizer of the Lawrence Landlords Association. Even after a rodent problem takes root, Araiza said, landlords aren’t always quick to act, especially if they’ve fallen on hard financial times.

“A lot of [landlords] will try to avoid calling an exterminator because they don’t want to spend on it,’’ Araiza said.

Despite limitations, cities are doing what they can to fight back. Lynn Mayor Judith Flanagan Kennedy this year convened a rodent task force that brings citizens together with officials from various city departments to strategize.

Specialists from the city of Boston have also met with Lynn officials this year to share rat-fighting know-how learned during the Big Dig. One city inspector devotes almost all his time to working with property owners to manage rat problems, O’Connor said.

But challenges remain. Guidelines enclosed with tax bills were written in Lynn’s three most common languages (English, Spanish, and Khmer), but Lynn has more than 50 languages spoken in its public schools. Efforts are ongoing, O’Connor said, to get guidelines translated into more languages.