It’s the role of his life

Police sergeant shines playing himself in “The Fighter’’ 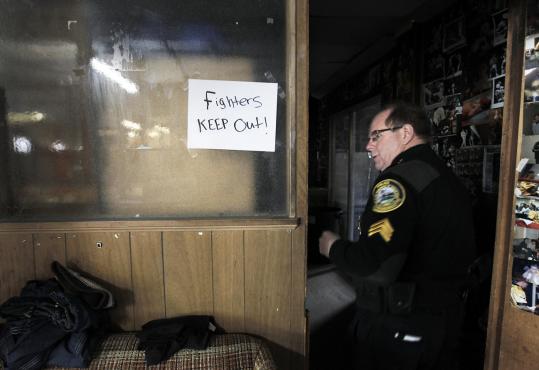 LOWELL — Mickey O’Keefe told his grandchildren that in his next movie they might see him sing and dance. He was teasing, but the kids had no idea. Grampy, they squealed, you can’t sing or dance!

Maybe not. But it turns out that O’Keefe, much to his own surprise, can act.

When Mark Wahlberg and director David O. Russell asked the 62-year-old Lowell police sergeant to play himself in “The Fighter,’’ the new, critically lauded film about boxer “Irish’’ Micky Ward, his first reaction was to laugh them off.

That got O’Keefe’s attention, and he agreed to audition as Ward’s trainer, the role he played in real life for almost five years. He got the part, a significant one in the movie.

“The Fighter’’ is drawing plenty of awards chatter for Wahlberg, who plays Ward; Amy Adams, who plays Ward’s girlfriend; and costar Christian Bale, who portrays Ward’s brawling, drug-abusing half-brother, Dickie Eklund. It also has been quite a ride for O’Keefe, a mischievous, good-natured father of three grown sons who attended the movie’s red carpet premiere in Hollywood earlier this month with his wife of 41 years, Donna.

Born and raised in Lowell, on the police force for more than 30 years, O’Keefe was well known around the city long before he became a movie star. He has known Ward and Eklund since they were kids; Eklund won a Silver Mittens championship with O’Keefe in his corner.

“Micky is like one of my kids,’’ said O’Keefe, sitting at a bare desk in the cinderblock bowels of Lowell police headquarters on a recent morning. “He ate at my house. We trained together.’’

In the film, O’Keefe plays a more stern version of himself, a counterbalance to the manic Eklund’s influence on the unassuming, hard-working Ward. He is the stalwart in a pivotal scene in which Dickie comes to the gym fresh out of prison, hoping to rejoin his brother’s corner.

In person, the compact cop — as a youth he won a Golden Gloves championship at 147 pounds — is the same guy he always was, a nonstop gusher of wise guy remarks and foul-mouthed humor.

Like many products of Catholic school and the military, O’Keefe can trade profanities with the best of them. When Wahlberg first asked him about acting, he blurted a reply.

“I can’t tell you what I said,’’ he recalled with a wry smile.

His fellow officers are having a field day with O’Keefe’s newfound celebrity. One has been typing up mock press releases for the first-time actor, claiming he’s had relationships with Phyllis Diller and Francis the Talking Mule. “Oh, they’re killing me,’’ O’Keefe said. “You have to have a thick skin to work here.’’

That’s a good asset for the movie business, too, as he’s finding out. Watching himself on the big screen felt “kind of funny’’ at first, he said. “But I don’t think I did anything that stupid.’’

Not that he’d be losing sleep if he had. O’Keefe, a recovering alcoholic who was the youngest child in an Irish family of nine, tries to live each day in the moment. “Everyone worries about how things are gonna be,’’ he said. “That’s called the boogeyman. I just go with the flow.’’

Besides, there are more important things in life than being a big-shot actor. O’Keefe’s 9-year-old grandson, Michael, just finished a round of chemotherapy. His wife’s sister, a 58-year-old with special needs, has lived with the family for years.

Dubbed the Blond Bomber in his boxing days, O’Keefe has thinning hair that still shows no hint of gray. Wearing rectangular glasses and a heavy, black police sweater with shoulder patches, he has shaved the thick mustache he wore in the film.

Training Ward was a joy, he said. “Micky always did a little extra. He never stopped, never quit. I remember we were in the gym one Saturday in the summer. It was 100-something degrees. I said, ‘Look around — it’s just you and me. That movie ‘Rocky’ is not real. You’re real.’ ’’

Such experiences are what made O’Keefe an acting natural, though that talent wasn’t so obvious at first blush.

“Casting was not in favor of that choice,’’ said Angela Peri, founder of Boston Casting, the local company that worked on the movie. “It’s very rare we put a novice in with seasoned actors, never mind a complete unknown. What happens if he’s in a scene with these Academy Award-winning actors and he freezes?’’

A veteran actor was waiting in the wings to play the trainer if O’Keefe didn’t work out. But that proved unnecessary.

“He was terrific,’’ said Peri — so good that she has O’Keefe auditioning for future projects. “He’s in a great age group. He can play the dad, the doctor, the cop. He’s got a great head shot. He’s ready to rock ’n’ roll.’’

On a slow Sunday, the sergeant took a reporter in his cruiser over to Art Ramalho’s West End Gym, which is featured in the film. The walls of the gym, located in an old brick warehouse, are papered with dozens of photos of fighters and trainers. The place was cold and empty. O’Keefe instinctively threw a couple of jabs at the heavy bag.

It was here that Ward mustered the strength and commitment to win a light welterweight title and fight three classic battles with the late Arturo Gatti, the bouts that made Ward’s name.

“Long after everyone’s dead and gone, those fights are going to be in history,’’ said O’Keefe. “Like the movie.’’

James Sullivan can be reached at sullivanjames@verizon.net.