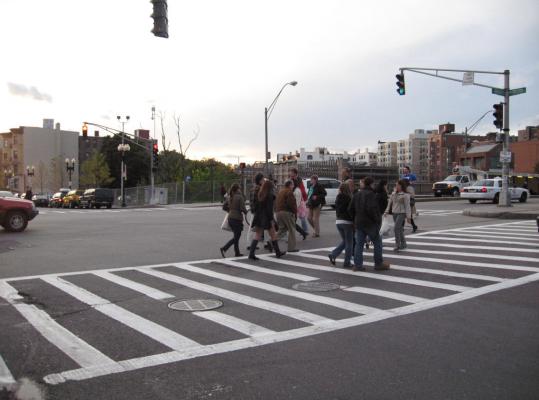 The walk signal at the intersection of Boylston Street and Massachusetts Avenue is one of many that doesn’t change until as much as 22 seconds after the pedestrian countdown ends. (Christina Pazzanese for The Boston Globe)
By Christina Pazzanese Globe Correspondent / December 20, 2010

Reader Douglas Johnson tells GlobeWatch that the Oct. 25 column about gridlock at the intersection of Boylston Street and Massachusetts Avenue neglected to mention one factor he believes is contributing to the problem: improperly timed pedestrian walk signals.

“Nearly all the pedestrian countdown signals in Boston are incorrect — usually changing to 0 anywhere from 5 to 20 seconds before the light changes to red,’’ including those at Boylston and Massachusetts Avenue, Johnson wrote in several e-mails.

“The signals at Boylston and Mass. Ave count down to zero about 20 seconds prior to the traffic light changing. Pedestrians ignore the signals (there could be 20 more seconds to safely cross), so get caught in the intersection, interfering with traffic and putting themselves at risk,’’ he wrote. “If the countdown signals worked (e.g. changed to 0 as the light turned red) pedestrians would be much more likely to obey the DONT WALK light and not create a hazard to themselves and to bicyclists.’’

Johnson recently provided Boston Transportation Department officials with a list of nearly 20 signals in Back Bay, along Massachusetts Avenue and Boylston Street, where he said the signals changed anywhere from zero to 22 seconds after the pedestrian countdown ends.

“After months of my complaining about this problem, city officials finally acknowledged that the timing was not correct at some intersections and that a work order has been issued to replace the controller at Boylston and Mass Ave.,’’ Johnson wrote. “However, officials will not say whether or when the problems will be fixed, nor say how pedestrian count-down signals should be timed.’’

THE CITY RESPONDS
“Kudos to the gentleman who pays such close attention,’’ said James Gillooly, deputy commissioner of the Boston Transportation Department.

Signal timing decisions are based on several factors, including traffic flow, so having a single uniform timing would not be appropriate for every intersection, he said. The agency has checked out 17 traffic signals on Johnson’s list. Of those, 11 require new, $15,000 signal controllers to be installed in order to make the adjustments he suggests, Gillooly said.

So far, four signals have been replaced; two more will be done by month’s end; and five others are scheduled for completion by the end of 2012 as part of the state’s Massachusetts Avenue reconstruction project now underway and another state-funded road project near Symphony Hall.

As for the rest, three of the 17 signals can be fixed by simply adjusting the existing controllers, he said. Two have been done, while the third is to be tweaked soon.

The Transportation Department disagrees with Johnson’s view that the remaining three signals on his list are improperly set, and has no plans to change those.

Generally, the agency does a broad signal review every five years, and checks on specific signals as issues or traffic changes arise, he said.

Readers with problems they would like addressed can send e-mail to globewatch@globe.com.