At Agassiz, progress and a sense of betrayal 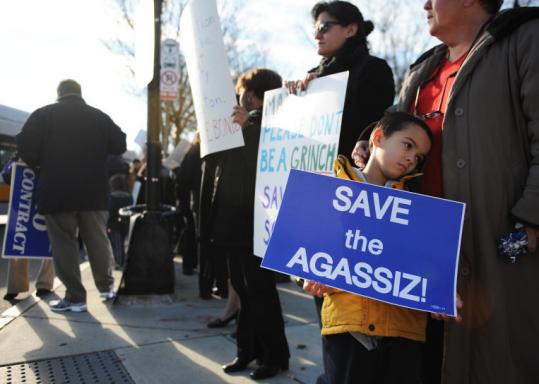 By many accounts, the Agassiz Elementary School, one of 12 underperforming schools in Boston, appeared to be showing glimmers of a rebound.

Math scores on the MCAS exam shot up this past spring after the school offered more intensive tutoring. Student attendance rates improved as the school cracked down on tardiness and absenteeism.

And the school district spent about $900,000 last year to replace dozens of grimy, leaky windows, allowing sunlight once again to filter into this Jamaica Plain building where air quality and mold has long been a concern.

Yet instead of optimism brimming from every nook and cranny, a sense of betrayal looms. The Agassiz’s improvement effort has run into a financial crisis that shows no signs of relenting, prompting Superintendent Carol R. Johnson to recommend closing the school.

For Johnson, the Agassiz represents two harsh realities: The high cost of turning around long-languishing student achievement, and the millions of dollars that could be necessary to remedy a range of building issues, including extensive roof repairs.

For Agassiz parents, staff, and students, the recommendation represents a broken promise, arriving less than six months after Johnson filed a plan with the state committing to turn around the school. They have organized a spirited campaign to save it.

“We’ve done everything we’ve been asked to do,’’ said Jacquelyn Driscoll, a character-education teacher. “We’ve demonstrated progress. . . . Why the Agassiz? Why now?’’

The School Committee is expected to vote tonight on the Agassiz’s fate as part of a broader effort to plug a potential $63 million shortfall next year. Johnson has proposed closing or merging about 17 other schools and a number of additional cost-saving measures.

“If not faced with these tremendous financial burdens, we would not have moved in this direction with the Agassiz,’’ said Frank Barnes, the district’s chief accountability officer, who is overseeing the overhaul of underperforming schools. “There were no easy comfortable decisions. I can double that for the Agassiz.’’

In targeting schools, Johnson considered a variety of criteria, including academic performance, building condition, and popularity among parents. She also attempted to spread the cuts across the city.

The Agassiz is the only underperforming school targeted for closing, but this fall two other underperforming schools have experienced setbacks in their turnaround efforts. Principals at the Blackstone Elementary School and the Harbor Middle School have or will shortly be leaving, several months after they started their positions.

The loss of principals so early in a turnaround effort — the state designated the 12 Boston schools as underperforming in March — could sap momentum when it needs to be increased, specialists say.

While a quick installation of dynamic new principals at the Blackstone and Harbor schools could reverse a slide, the Agassiz appears to be in a tailspin.

It was not the outcome staff, students, and parents ever imagined when the state tagged the school as underperforming, an event that caused widespread disappointment but reaffirmed their resolve to turn around the academics.

The staff already had a school-improvement plan in place, the byproduct of previously being labeled underperforming by the state in the last decade. Some elements were starting to yield results, said staff and parents who gathered one recent morning at an Italian bakery around the corner from the school.

Teachers characterized their efforts to turn around the Agassiz as a personal pursuit.

“We just don’t teach a lesson plan,’’ said Sarah Quatrale, a fourth-grade teacher. “These are our children. . . . The city shouldn’t look at us as a burden. We are their investment in the children’s future.’’

Most of the 500 students are from groups that traditionally struggle on standardized tests: Some 28 percent have learning disabilities; more than half are not fluent English speakers; nearly 80 percent are Latino; and 83 percent live in low-income households, according to school district numbers.

The school also runs a program for students with autism and another program for immigrant students who missed several years of schooling in their native country.

The Agassiz school-improvement plan includes such strategies as extended days, more training for teachers, and weekly assessment of students. The school also works with such organizations as City Year, which sends over more than a dozen volunteers who monitor attendance and serve as mentors and tutors for students.

Yet solving one major concern eluded the staff and parents: worries that potentially poor air quality is contributing to high asthma rates and other respiratory problems among students and staff.

The Agassiz, surrounded by narrow streets lined with tidy three-deckers, was built in the early 1970s with “wall-less’’ classrooms. Like many schools of that design, the Agassiz has long been engulfed in speculation about having “sick building syndrome.’’

A report last year by the state Department of Public Health, which investigated air-quality complaints at the school, outlined about three dozen recommendations to improve the building’s environmental conditions, calling for new windows, roof repairs, and simple maintenance such as keeping chalkboard trays clean.

Environmental activists and school district officials disagree over whether the report found major air quality problems at the school.

Matthew Wilder, a school district spokesman, said in an interview that the report found no ties between health problems among staff and the building itself. “There is a perception the building is unhealthy,’’ Wilder said. “I don’t know if any amount of money would change that perception.’’

Nevertheless, repair costs factored into the district’s decision to close the Agassiz, Michael Goar, the district’s deputy superintendent, explained during a Dec. 2 School Committee meeting, in response to a question raised by a member of the audience.

If the Agassiz does close, many parents say they would miss a community that has become special to them. But they also worry that siblings may ultimately be split up if the school district fails to place them in the same school.

“I’m worried about my children’s education in another school,’’ said Majida Ortiz, whose children are in kindergarten and the fourth grade.

“Will my children have the same support, love, and guidance their teachers are giving them now?’’