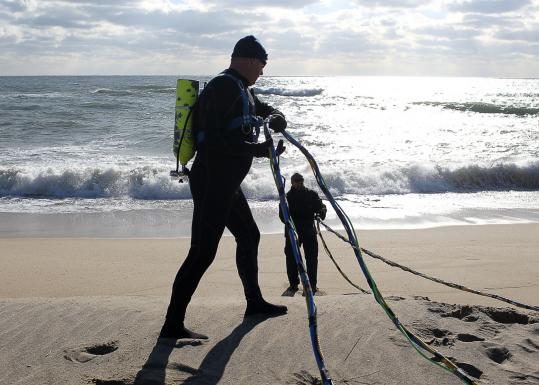 A diver checked his gear before heading into the sea yesterday to plant a device that monitors water currents. (Jonathan Wiggs/Globe Staff)
By Brian MacQuarrie Globe Staff / December 10, 2010

Then he displayed previous finds from the sands of Martha’s Vineyard: an 8-pound practice bomb, a 2.25-inch rocket motor, and a 3-inch antisubmarine warhead mounted on a crusty, salt-pocked rocket.

This dangerous debris, used in US Navy aerial training during World War II, is but the tip of a buried cache of munitions dropped and fired on the island from 1939 to 1947, federal officials said.

Beginning this week, the Army Corps of Engineers is searching for evidence of these bombs and rockets that remain hidden in the Vineyard’s sand, scrub, and surf. In the spring, the Corps plans to remove all that they can find. The effort is expected to extend into 2012.

“Absolutely, I think we will find munitions,’’ said Carol Charette, New England project manager for the Corps of Engineers. “How many or where they are located, I have no indication at this point.’’

The Corps and its contractors are focusing their search on South Beach, Cape Pogue on Chappaquiddick Island, and Tisbury Great Pond. The need for such work was underscored by the discovery of three 100-pound bombs last month, Charette said.

The chance of an accident is remote, Charette and Rancich said. But the jagged warheads and live explosives that lurk unseen have the potential to cause serious injury.

“The biggest threat is just cutting yourself on the metal,’’ said Patrick Fogleson, an explosives-clearing specialist from UXB International, a New Jersey-based contractor that has been hired for the project. “You also could conceivably lose a foot or a hand, but you’d have to be messing with it.’’

Officials do not expect to disrupt the use of beaches, but if a munition is found, the public will be barred from the immediate area.

Field workers, who have begun to survey part of South Beach with metal-detection devices, are embarking on the federal government’s third effort since 1989 to clear the island of munitions from World War II.

The initial effort appeared to be successful, but bomb and rocket fragments began to reappear last year on a shore that is constantly reshaped by wind and water. The result is a $5.2 million project that is the only such recovery underway on the New England coast.

During the war, Navy planes from Quonset Point, R.I., and squadrons from Martha’s Vineyard dropped practice bombs in preparation for combat in the Pacific, Rancich said.

Rancich estimated that a couple of hundred bombs were dropped weekly for eight years. Although live bombs have been discovered in the past, Rancich said, many of the munitions that remain might contain only smoke or flash charges that would show Navy aviators where their practice bombs had landed.

Yesterday, Rancich watched as a former Navy diver strode into 4-foot swells and disappeared under the surf to plant a simulated rocket motor, equipped with an audio signal, in the sandy bottom. The hope is that the Corps will be able to track the device’s movements to better understand how munitions might have moved with the currents.

The diver, who wore a 40-pound helmet equipped with a camera and light, works for VRHabilis, a company composed of disabled veterans.

Racich, who broke his neck and back in a 1997 helicopter crash in the Persian Gulf, is a partner in the firm, which has also been contracted by the Corps for the project.

In a trailer on the beach, the diver could be heard taking quick, strong breaths as Scott Alogna, a former Navy master diver, used a 600-foot communications cable to direct his movements underwater. The camera attached to the diver’s helmet gave his handlers a good subsurface view of his work.

From now until the spring, the work will consist mainly of mapping to determine where munitions might be located underground.

“We’re trying to get our arms around this,’’ Charette said. “Do we have a problem to begin with, and what is the extent of the problem?’’

Following the survey, she said, the project will focus on recovery. She said the public should be aware that any suspicious objects encountered should not be handled. Instead, people should leave the area and call 911.

“When you take it and use it as a doorstop, you have a problem,’’ Charette said.

Macquarrie can be reached at macquarrie@globe.com.