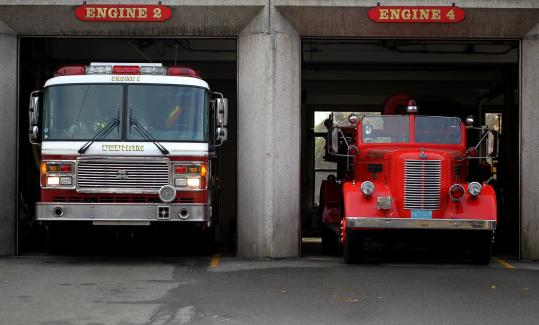 When it snows, firefighters in Hull make sure the paved apron outside their central station is plowed to the concrete — or else the fire trucks might not make it out the door.

“Honestly, there’s about 3 inches or so clearance,’’ said Fire Chief Robert Hollingshead. “We have to be very careful in snow and ice storms. We also have to be sure all the equipment is in its lowered-down state. Otherwise, oh boy, we’ve done that — damaged a few garage doors.’’

Hull is far from alone in dealing with the peculiar problems that come with trying to squeeze modern fire trucks into old — sometimes antique — fire stations. Dedham, for example, cut bigger door openings at one station so a new truck could fit inside.

Milton can’t put a full-sized engine at its busiest station on Blue Hill Avenue, for fear the floor would collapse under the weight.

“It’s a pretty significant problem across the Commonwealth,’’ said Marshfield Fire Chief Kevin Robinson, who is president of the Fire Chiefs Association of Massachusetts. “It’s something every fire chief has to think about when he gets a new truck: ‘When I get this new truck, will it fit in my building?’ ’’

The problems extend to all dimensions — height, length, and width — as well as weight, Robinson said. And while the increase in size is largely the result of safety improvements, it still creates major headaches for firefighters and added costs for towns, he said.

In Hull, for example, Hollingshead figured the town paid an extra $25,000 to $30,000 for its latest ladder truck because of the height restrictions — almost a foot shorter than normal to fit the 10-foot-8-inch space — written into the specifications.

“Some vendors wouldn’t bid on it,’’ he said.

Ceiling and door heights weren’t an issue when Hull’s Central Fire Station opened almost 102 years ago and horse-drawn equipment was still in use. The department was the first in New England to buy a motorized pump truck, with Town Meeting authorizing up to $8,000 for the purchase in 1909; a Boston newspaper’s disapproving headline read: “Hull Drunk with Money.’’

That truck was huge for its time, but it would be dwarfed by modern equipment, said Dave Clark, a former Hull firefighter who is president of the Bare Cove Fire Museum in Hingham.

“Even the biggest piece we have in the museum — a pumping engine from 1935 — is small by comparison to today’s trucks,’’ Clark said. “The antique fire engines look like they’d fit inside the new ones.’’

A key reason for the ballooning size of fire trucks is firefighter safety, especially the move to enclosed cabs in the mid-1990s.

Up until then, firefighters who weren’t driving stood on a fire truck’s tailboard and held on to rails when going to a fire — a practice that resulted in an alarming number of deaths and injuries, according to Robinson.

“You never see a firefighter riding on the back of a truck anymore,’’ he said. “So we’ve made the trucks safer. But by making apparatus safer, we made the vehicles heavier and bigger and longer.’’

Along with enclosed cabs came seat belts and airbags, which saved lives but added bulk. The ladders used to reach fires also became safer — more like stairs with broader steps and enclosed sides — for both firefighters and the people they evacuated, said Mark MacDonald, vice president of sales for Greenwood Emergency Vehicles in North Attleborough.

MacDonald said another reason for the growth is that fire departments “try to do more with the trucks. Lots of times these vehicles are carrying special equipment. . . . They have to respond to fires, accidents, hazardous waste spills. They’re multipurpose.’’

“Our role has gotten bigger, so we have to carry more equipment,’’ said Hingham Fire Chief Mark Duff. “Every fire truck has an extensive amount of first aid equipment, Jaws of Life equipment, exposure suits for water rescue, blocking for technical rescue work.’’

Duff said another reason his fire trucks carry more equipment is that budget cuts have decreased the number of trucks in service. “The town used to run six engines and a ladder out of three stations. Now we run two engines and a ladder, and all that equipment had to be consolidated,’’ he said.

Fire trucks also carry more water than in the past, Robinson said.

“In Marshfield, we have a good hydrant system so we’re only carrying 500 gallons of water,’’ he said. “But some communities are carrying 750, 1,000, 1,500 gallons. And water is heavy; a gallon of water weighs 8.3 pounds. So that means you have to make the [fire truck’s] suspension and braking [systems] bigger.’’

Duff said ambulances are bigger, too, which improves emergency care. “The most recent one we bought was full height — 3 inches higher [than the department’s older ambulance]. That 3 inches is a big deal when you’re working in an ambulance,’’ he said.

He was able to buy the taller model because Hingham renovated its Central Station and built a spacious addition in 2008. Fire chiefs in other communities haven’t been as fortunate.

Dedham Fire Chief William Cullinane, for example, is still waiting for the town to come up with an estimated $10 million to $15 million for a new station.

About 50 communities across the state have applied for federal money for fire stations in the last three years, or about $1 billion in requests, Robinson said. Only two — Chelsea and Ware — received any money, he said. The chance of getting any state financial help is even less likely, he said.

In the meantime, fire departments are practicing creative coping.

They’re shoveling snow down to the concrete, repairing fire trucks outside, and pushing up door frames. Marshfield added 10 feet to the back of a 125-year-old station so firefighters could walk in front or in the back of the trucks without turning sideways.

“We’ve recognized the need for smaller products,’’ he said.

MacDonald, who represents Florida-based E-One, said the manufacturer routinely customizes fire trucks sold locally. A recent example, he said, was a “low-profile cab’’ on a ladder truck delivered to a century-old fire station in Boston.

“They are beautiful buildings,’’ he said of the area’s historic fire stations, “but they’re just not always that functional.’’