As numbers rise in state and nation, Boston group seeks to create shelter 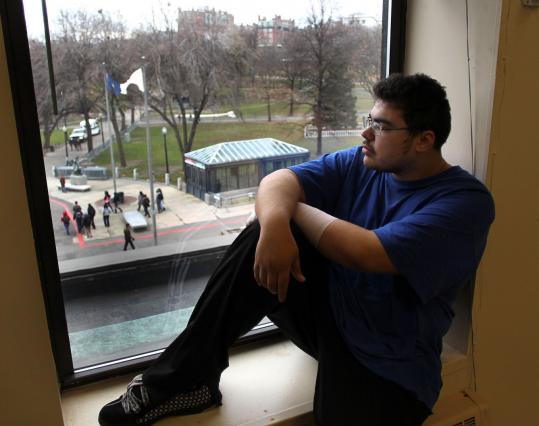 Since she aged out of foster care three years ago, Kaila Dunn has lived in more homeless shelters than she can recall, often dingy dwellings full of drunken men, rampant drug use, and too many people seeking to take advantage of her.

The 21-year-old high school dropout from Randolph is among what city, state, and federal officials say is a rising number of homeless youths and young adults. Every year, tens of thousands of them become too old to remain in state custody or land on the streets because of broken families.

State education officials counted 13,090 homeless students in the last academic year — an 85 percent increase from five years before. Of those, 735 were defined as unaccompanied, out of the custody of their parents or legal guardians. That is more than double the number five years before.

The problem has become so magnified that one city nonprofit organization is working to open the state’s only shel ter for homeless youths early next year.

Bridge Over Troubled Waters, a local nonprofit, plans to house 12 youths in its building in downtown Boston, one of only a few shelters in the nation designed for homeless youth.

“I’m hoping this new shelter will make it easier to move on with my life,’’ said Dunn, a candidate for residency.

The rise in the number of homeless youths is traditionally difficult to track, as it is measured largely by reports from schools, shelters, and other social service agencies. Federal officials estimate at least 110,000 youths between 12 and 24 years old live on the nation’s streets.

One measure of the increase’s effect is the amount school districts pay to pick up homeless students at shelters and transport them to their schools. That expense more than doubled, exceeding $9 million, from 2005-2006 to 2008-2009.

The Pine Street Inn, one of New England’s largest providers of homeless services, has so far this year accommodated 332 youths and young adults — those between ages 18 and 24 — more than double the number in 2008.

The Boston Public Health Commission said 469 of the nearly 5,300 people who stayed at city shelters between last December and the end of last month were 18 to 24 years old, a 68 percent rise from the year before.

Meanwhile, Youth on Fire, a drop-in center for homeless youths and young adults in Harvard Square, served 620 clients this year — more than triple the number from two years ago. And Father Bill’s, which houses the homeless in Quincy and Brockton, reported that 179 youths and young adults between 18 and 22 sought shelter there in fiscal 2010, up 43 percent from fiscal 2008.

“The increase has been so dramatic that we created a committee to try to figure out how to best support this population,’’ said John Yazwinski, chief executive of Father Bill’s.

For the first time, he said, his organization is providing apartments and case-management support for 11 older teenagers trying to graduate high school.

“We’re not sure if it’s the pressure from the economy, but we’re seeing a lot more kids where home just isn’t a safe place,’’ Yazwinski said.

Many of those youths and young adults seeking a bed at the larger shelters are referred for counseling to Bridge Over Troubled Waters, which serves nearly 2,500 clients ages 14 to 24, many of them runaways.

After four decades of providing housing, educational, and career services to homeless youths, the organization that overlooks Boston Common has decided it needs to fill what its staff sees as a yawning gap for its clients.

They say adult shelters are the worst possible place for the youths, many of whom have recently left the juvenile detention system, foster care, or fled difficult situations at home.

And young people are often insufficiently street savvy, vulnerable to being mistreated while living in close quarters with people who have criminal records, drug problems, or mental illnesses.

“I’ve been here for two years and decided I couldn’t see another winter go by watching our clients struggle to find a place to bed down for the night,’’ said Robb Zarges, executive director of Bridge Over Troubled Waters.

He said the shelter would cost about $420,000 a year to operate and would provide beds only temporarily, with the goal of moving the youths and young adults to permanent housing as soon as possible. He said the organization has raised a little more than half the $1.3 million it needs and hopes to open this winter.

“We’re not under any delusion that this is the final answer to address youth homelessness,’’ Zarges said. “But we do believe this will help and that there is a strong demand.’’

One of Zarges’s clients, Lance Tinder, 20, has bounced from shelter to shelter since he left home in Boston last year. “It’s not fun to live with overly aggressive drunk people who can’t understand where you’re coming from because they’re in such a different place,’’ he said, describing his experiences in a shelter.

Federal officials at the Interagency Council on Homelessness in Washington said there are only a few shelters nationwide that are exclusively for youths. They said the US Department of Education in the 2008-2009 academic year counted 52,950 unaccompanied homeless youths between ages 12 and 17 — 32,000 more than they counted five years before.

Officials said they are seeking to improve the way they collect statistics on homeless youths, who often lie about their age and live below the government’s radar by staying with friends or living on the streets.

“Our greatest challenge has been the general lack of awareness of youth homelessness, because they try to stay underground because of their legal status,’’ said Barbara Poppe, the agency’s director, noting many are younger than 18. “The unreliable statistics makes it harder for us to understand the extent of the problem.’’

Nan Roman, president of the National Alliance to End Homelessness in Washington, said she thinks the numbers are considerably understated and that the country needs to do more to address the issue.

“Every indication I have is that our response to the problem is completely insufficient,’’ she said. “We have many more homeless youth than we have help to give them.’’

For Frankie Rosa, 22, who grew up in East Boston, the possibility of staying at what he describes as “my oasis’’ at Bridge Over Troubled Waters would be a big improvement over the city shelters where he bunks at night.

He wants a place that will allow him to collect his thoughts, let down his guard, and work on his goal of going to college.

“I need to live in a place that’s not so depressing, where people haven’t given up on life,’’ he said. “It would be really nice to stay at Bridge if I could.’’