Two dead, one on life support in shootings 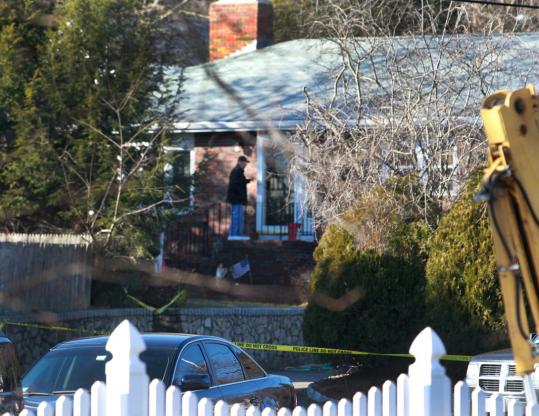 DEDHAM — Family members of a woman critically wounded during an apparent murder-suicide of her parents early yesterday were gathered around her hospital bed last night, where she was on life support.

“They are in a lot of pain right now; all of them are so sad,’’ said Deena Weir, whose daughter is married to the brother of the suspected killer, William Spada.

Police say evidence suggests that William Spada shot his wife, Patricia Spada, and their daughter, Deidre Spada, before turning the gun on himself inside their home at 2 Carmichael Circle, in a small cul-de-sac off Route 1.

“It’s just really hard to believe that something so terrible happened,’’ Weir said in a telephone interview from her daughter’s house. Her daughter and son-in-law were at Beth Israel Deaconess Medical Center, where Deidre Spada, 26, was listed in critical condition after being shot in the back of the head. “The whole family is there,’’ she said.

Deidre Spada’s 27-year-old boyfriend, an apparent witness to the 1:30 a.m. shootings, gave authorities a “very detailed’’ description of what happened inside the single-story red-brick house, according to authorities. He said he escaped by running out of the house.

“Investigators are moving forward trying to corroborate his statements,’’ said David Traub, spokesman for Norfolk District Attorney William R. Keating. Traub declined to comment on the specifics that the witness conveyed to authorities.

But authorities did say that the boyfriend, whose name has not been released, lived at the house and told detectives that William Spada, 53, shot his 51-year-old wife and their daughter before turning the gun on himself. Police scoured the residence through the early morning, and William and Patricia Spada’s bodies were taken out by a medical examiner at about 10 a.m. Autopsies are scheduled today. The boyfriend is not a suspect and has not been held.

After authorities left, just before noon, small droplets of blood remained on the walkway leading to the front door.

The shootings shocked residents of this tiny dead-end street. Next-door neighbors Claire and Tony Wilson said they had never observed anything “out of sorts’’ with the family and considered them very likable and hard-working.

The family ran Spada Landscaping and Plowing and kept much of their heavy equipment, including large yellow plows and several dump trucks, in their driveway. There are only three houses on the street, and most of the Spada home is hidden behind thick pine trees. A backhoe, fork-lift, and a steamroller were parked along the narrow entrance to the cul-de-sac.

“They did snow plowing in the winter and paving in the summer,’’ Tony Wilson said. “Never did I imagine that something like this could happen to them. Everything seemed to be going great.’’

Wilson said police rang his doorbell at about 2 a.m. yesterday, and asked the Wilsons if they had seen or heard anything. “Didn’t hear any shots, that’s for sure,’’ he said.

Claire Wilson said the Spadas often had employees at the residence. “The trucks were pretty busy,’’ she said.

Traub said there had been no previous problems involving police at the house. Dedham police were not commenting yesterday on the case.

Rosemarie Lowney, who runs a day-care program from a two-story red-brick house near the entrance of the cul-de-sac, also said she did not hear any gunshots. Lowney said she has lived next to the Spada home for about 12 years and also described them as hard workers.

“Billy would do things for me; he was great,’’ she said. “He filled in a hole down my driveway. They seemed very happy as a family. I just always saw them working, him and his son.’’

Lowney and the Wilsons said the Spadas’ son was away from home attending college. They also said Deidre Spada’s boyfriend worked for the family business.

Patricia Spada also worked as the treasurer for the Justin House, a nonprofit ministry created by Judith Stivaletta after her 20-year-old son, Justin, accidentally shot and killed himself five years ago. Stivaletta declined to comment about the Spada deaths.

A friend of the Stivalettas, a woman who declined to give her name, said while standing on the family’s front lawn: “This is just a terrible time for her, because she and Patricia were so close. They are so devastated about what happened.’’

The woman said that the Stivalettas planned to hold a prayer vigil last night at St. Mary’s Church in Dedham.

According to statistics from Jane Doe Inc., a statewide coalition against domestic violence and sexual assaults, there have been 30 domestic violence homicide victims so far this year, and 15 “perpetrator suicides.’’

In all last year, there were 23 domestic violence homicide victims and five perpetrator suicides.

“This year, it’s almost an average of one a week,’’ said Toni Troop, spokeswoman for Jane Doe. “Research and experience proves that it’s predictable, so there needs to be a better effort at helping victims identify when they are in high-risk situations.’’