Seek to help many in city find shelter 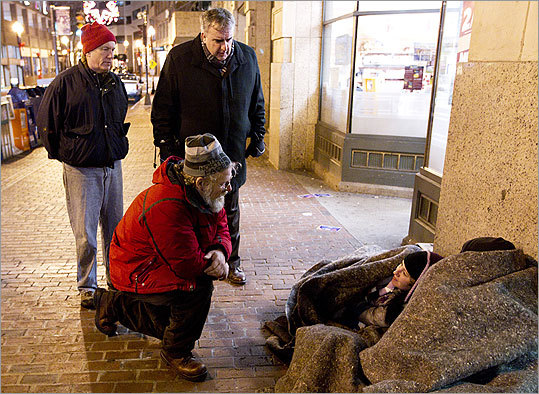 More than 350 volunteers braved the cold last night to conduct the annual Boston Homeless Census, making an effort to count the city’s homeless population and help as many as possible find shelter and services.

Leading the counters was Jim Greene, director of the city’s Emergency Shelter Commission. With a wool hat that barely covered his ears in the frigid temperatures, Greene peered around every corner and checked every doorway he passed, ready with respectful words, a firm handshake, and a cellphone to call for a shelter van.

“It’s literally 40 degrees colder with the wind chill than it was yesterday. That’s a lot,’’ Greene said. “There are places where I’ve seen people before, but they weren’t there tonight, like that first doorway at the Old State House. It’s unpredictable but people are down here.’’

Sure enough, as they reached the 7-Eleven at Post Office Square at Downtown Crossing, Greene found Darrell Noles, 45, and his wife, Siobban, huddled against the cold under a set of blankets.

The officials offered to put them up in a shelter for the night.

“We have to stay together. Only if we can stay together,’’ Siobban responded, shivering as she pronounced every frozen word.

A van took them to the Boston Night Center, which allows couples to stay together overnight.

As they rose and headed toward the van, their possessions were little more than the blankets, an open bag of Tostitos, and an empty pint liquor bottle.

Greene knew the couple, as did Police Commissioner Edward F. Davis, who was part of the group.

Siobban said she had a drinking problem. Darrell has an extensive criminal record, Davis said. Neither point was relevant last night.

“I’ve talked to Siobban and Darrell many times,’’ Greene said. “Despite the obvious issues, they want to stay together, and they want to go to a location where they can be together.’’

The dozens of census groups found many more homeless in every neighborhood last night, but the exact numbers were not yet available. Some people accepted help, while others refused and turned the counters away.

The number of homeless families in Boston has risen steadily over the past three years to more than 3,800 during last year’s census.

But Boston can tout one of the lowest rates of unsheltered homeless among all major cities across the country. Only 3.4 percent of the city’s homeless were found on the street last year, according to Mayor Thomas M. Menino’s office. The national average was 41.9 percent last year.

Menino, still recovering from several days being hospitalized for an infection and an adverse reaction to antibiotics, did not attend the 31st annual census count. It was only the second time in his five-term tenure he was not on hand. He also missed last year’s census as he recovered from knee surgery.