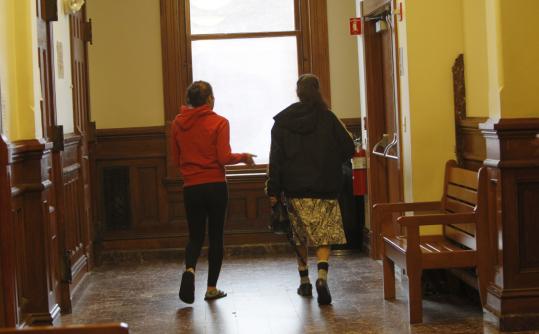 LOWELL — Criminal and child welfare caseloads in the state’s juvenile courts have fallen sharply over the past three years despite economic turmoil that has placed enormous strain on many families, a dramatic decline that confounds social workers, lawyers, and child and family advocates.

Juvenile courts handle three major categories of cases. The most common are delinquency cases, which deal with criminal offenders under the age of 17. Judges also hear petitions involving abused or neglected children, and review cases involving youth who are in trouble at school or home or regularly running away.

Coming at a time of high unemployment, housing instability, and budget cuts to social services, the decreases have defied easy explanation.

“Everyone’s saying, ‘Where are all the kids?’ And I don’t think anyone has the answer,’’ said William Lyttle, president of KEY Program Inc., a Framingham social services group that helps hundreds of adolescents in the juvenile and child welfare system. “A lot of us expected just the opposite.’’

There is little consensus over what has caused the drop.

Budget-crunched police departments are spending less time prosecuting minor offenses, many say, while prosecutors are focusing more on crime prevention and sending low-level offenders to diversion programs outside the courts.

Other specialists cite a growing number of community programs that are reaching out to at-risk teenagers in hopes of steering them out of trouble before they become involved with the courts. Hospitals, schools, and local police, many believe, are doing a better job of recognizing troubled teenagers and pointing them toward help.

At the state level, child welfare officials say they are focused on resolving more domestic situations and working with troubled teenagers in the teens’ homes, rather than removing them from parents or guardians.

The decline in cases involving youth who have committed crimes, or are otherwise deemed to be at risk, has delighted child advocates, who believe far too many adolescents — disproportionately African-Americans and Hispanics — are pushed before judges for relatively minor misconduct.

“I’d like to think that we’re finally waking up to the fact that this is not efficient,’’ said Josh Dohan, who directs the youth advocacy department for the Committee for Public Counsel Services, the state’s public defender organization. “To my mind, it should have gone down a long time ago.’’

Juvenile crime rates have steadily dropped, both in Massachusetts and nationally, since the 1990s. But before the plunge over the past few years, the number of delinquency cases in Massachusetts had remained stubbornly high. Gerard T. Leone Jr., the district attorney for Middlesex County, said his office is giving more youths the chance to avoid prosecution if they agree to counseling and stay out of trouble, a program he said has gotten good results.

“It’s our clear preference’’ for students who have no prior criminal record, he said.

Schools, too, are slower to involve police in discipline matters.

“There’s more school-based mediation and resolution programs than before,’’ said Jane Tewksbury, commissioner of the state Department of Youth Services.

Tewksbury said DYS has sharply reduced the number of juveniles who are detained, a 38 percent decline between 2005 and last year, on the belief that treating youths as criminals is counterproductive and may lead to more serious offenses down the line.

“Research indicates that traveling in a van with shackles really does turn the kids on a negative trajectory,’’ she said.

Despite the decline, judges continue to face a relentless slate of turmoil and hardship.

The boy, whom the Globe agreed not to name, had been in state care for two years and desperately wanted to go home. His social worker wasn’t sure he was ready. Just the other day, he had punched a staff member in the face, sending him to the hospital. The 17-year-old swayed back and forth in his chair, his eyes lowered.

The judge climbed down from the bench and gathered everyone around a small table.

The drop in child welfare cases, while less steep than the decline in delinquencies, has come as a greater surprise to those who work with young people. Many feared that joblessness and financial troubles would exacerbate domestic violence, substance abuse, and neglect.

“It’s a major question in the social services world,’’ said John Larivee, the head of Community Resources for Justice, a Boston group that works with youth in the juvenile justice system.

One likely answer is that the state Department of Children and Families, over the past few years, has worked to keep children in their homes whenever possible, and provide families counseling and other support.

Five years ago, the department spent $20 million to bring clinicians, therapists, and social workers to people’s homes. Today, it spends twice that, even after recent budget cuts, because a far smaller share of its funds goes to residential placements.

Care-and-protection petitions, which the state files when seeking to remove a child from a home believed to be unsafe, were filed for 4,541 children in fiscal year 2010, about 1,000 fewer than the previous year. The state has received more reports of abuse and neglect in the last few years, but is handling more of them by sending counselors and other family specialists to these homes. There are now 2,000 fewer children in foster care than three years ago.

McClain said despite the shift, there has been no increase in repeat problems. But some worry that the state’s new approach goes too far.

“Philosophically, we applaud it,’’ Larivee said. “But there’s a concern that we might be moving too many kids . . . to families that aren’t ready.’’

Michael Dsida, deputy chief counsel of the Children and Family Law Division at the Committee for Public Counsel Services, said lawyers and advocates worry that budget pressures have forced the state to turn away more families seeking help.

“There are limited resources for social services, and it wouldn’t be surprising if DCF were not providing services to families who have no legal claim to it,’’ he said.

Back in Lowell, the 17-year-old perked up when the judge said he thought it was time for him to go home. Asked if he would wear a monitoring bracelet, continue counseling, and submit to random drug-testing, he nodded vigorously each time.

“It sounds amazing,’’ the teen said.

Smiling for the first time, the teenager rushed to his mother’s arms, and for several seconds did not let go.