For Hindus, room to grow 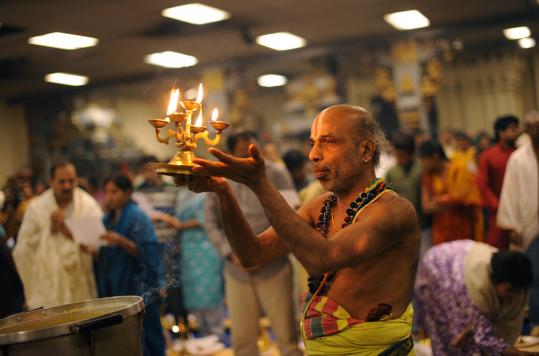 Krishna Bhatta led a ceremony last month at the Sri Lakshmi temple in Ashland. Leaders of the temple (below) hope to add a new wing next spring. (Gretchen Ertl for The Boston Globe)
By Lisa Wangsness Globe Staff / December 6, 2010

ASHLAND — New England’s oldest Hindu temple is planning a $2 million addition that will provide its burgeoning community of devotees with more room for religious and cultural programs, as well as space to expand religious education classes for a new generation of American-born children.

The new wing will add about 15,000 square feet of classroom, function, and dining space to Sri Lakshmi Temple, which sits on a large tract set back from Route 135. Temple leaders hope to begin construction in the spring.

Shan Bavanantham, the temple’s president, said the temple will not borrow money to complete the project.

“It’s definitely a daunting task, but we are confident we will be able to raise the funds we need,’’ he said.

The temple, first conceived by a small group of Indian immigrants in 1978, was built slowly over the next dozen years. Its ornate exterior iconography was carved by a team of Indian artisans, and its granite deities, including Sri Lakshmi, the goddess of auspiciousness and prosperity, were shipped from India. The community has grown dramatically since the high-tech boom of the mid-1990s, when many Indian professionals moved to the Boston area, leaders of the temple said.

Most weekends, hundreds visit the temple to participate in private and public poojas, or ceremonies. Families also schedule private ceremonies at the temple — to celebrate milestones such as a baby’s first haircut, for example, or to bless a new car for safety. Devotees stop by whenever the temple is open for darshan: beholding, and being seen by, the temple’s deities. And many linger long after their devotions to visit with friends.

Last month during Diwali, the “festival of lights’’ that is among the most important in the Hindu calendar, thousands of people from across New England visited the temple to worship, celebrate, and socialize.

Sri Lakshmi Temple opens its doors to high school and college classes and local religious groups who come to learn about Hinduism; it also provides college scholarships for Ashland and Framingham students each year in an effort to be a good neighbor.

But space is tight for lectures, musical concerts, and dance programs. And there are no classrooms dedicated to allowing the temple to expand formal educational programs, which have become an increasingly important focus as a way of transferring religious practices, spiritual knowledge, and language related to Hindu cultural traditions to young people who are growing up immersed in American culture.

“This generation requires everything to be explained rationally as much as possible, instead of the traditional way of learning . . . through osmosis, being surrounded by a culture of people doing it,’’ said Kumar Nochur, past president of the temple. “For the younger generation, it’s necessary to explain more before they begin to practice anything.’’

Abhirami Shrinivas, 35, who immigrated to the United States in 1998, said the temple is a vital cultural link between her young children and her extended family in India.

“For my kids, I think going to the temple makes them familiar with some of the rituals so that they can connect to my parents in India,’’ she said. “I think a lot of kids who don’t have that connection, they feel shy’’ when they visit extended family overseas.

In the past five years or so, the temple has begun offering Sanskrit classes for both children and adults. On Friday evenings, the temple offers Bala Vidya Mandir, where youth learn about the deities and the meaning and origins of Hindu festivals, and are taught shlokas, prayers in a particular meter of verse.

The Ashland Planning Board signed off on the plan two years ago, said Giri Bharathan, a trustee of the temple and chairman of its construction committee, but construction was delayed while the temple acquired land for a sewer hookup.

The temple plans to seek permission this month to connect with the Framingham sewer system, and it plans to apply for a building permit in Ashland in January, said Bharathan.

Preston F. Crow, chairman of the Ashland Planning Board, said a number of neighbors attended hearings in 2008 to express concerns about lighting and the need for visual barriers.

Even though Massachusetts law restricts municipalities’ ability to regulate religious properties, he said temple representatives made several modifications to address them.

The basement level of the new annex will include a kitchen, pantry, and dining area; the first floor would have six classrooms, which could be converted to a larger space for religious ceremonies, performance, and cultural programs.

It will also have an elevator to provide better access for people using wheelchairs. The temple also plans to add an all-season glass enclosure along one side of its existing building to house an office, a temple shop, and space for devotees’ coats and shoes, which must be removed upon entering the main temple.

The promise of a larger kitchen pleases Sunder Rao, 70, who often cooks for hundreds in the cramped basement kitchen.

As he mixed yogurt rice in a massive aluminum bowl, in preparation for a meal after a celebration of the new moon last month, he said with a laugh, “Everyone wants to eat at the same time.’’