Desperately seeking Marisol, by all means, old and new 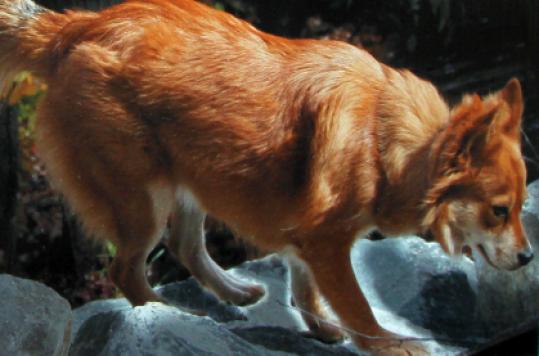 Marisol, 3, got lost in the Middlesex Fells Reservation on Nov. 2.
By Billy Baker Globe Staff / December 5, 2010

MEDFORD — The attack came out of nowhere.

In an instant, little Marisol was gone, and Toby, her buddy, was badly hurt.

They had been out with their dog walker, six dogs having a playdate in the Middlesex Fells Reservation, when a pit bull charged out of the woods and lunged for Marisol.

Toby, a normally timid golden retriever mix, stepped in for his little friend and took a beating, holding the pit bull off until its owner finally appeared and punched his dog off.

During the melee, Marisol fled into the woods.

That was Nov. 2. Toby is slowly recovering. Marisol — a 3-year-old, 20-pound copper-colored mutt — is still out there, and the search for her has become one of the most elaborate and high-tech ever mounted for a missing dog.

On a fundamental level, it is a story of instinct and ability.

Andrew Sempere was at work when he got the call telling him his dog was missing. He’s a researcher at the Center for Social Software, and he immediately called his wife, Anindita, whom he’d met when they were grad students at MIT.

Instinct said to go to their dog, so the Semperes went to the Fells, searched for hours, called Marisol’s name, and sang to her.

“Then it got dark,’’ Anindita remembered. “It was horrible. Absolutely horrible. To leave felt like we were giving up.’’

But they did not give up. Instead, they tried to reinvent the search for a lost dog.

The Semperes didn’t just meet at MIT; they met as students at the MIT Media Lab, a place that values, above all, unorthodox thinking about technology.

The Marisol campaign, as the Semperes call it, harnessed the social networking power of the Internet to create a search-and-rescue army. The couple created a blog, findmarisol.com, and a Twitter hashtag, #MarisolSearch, which got a boost when the best-selling author Susan Orlean tweeted it to her 91,000 followers.

They took out geo-targeted Facebook ads on the pages of those who live in the vicinity of the Fells and list dogs and hiking in their hobbies. They hired a $100-an-hour tracking dog and used GPS to create a 13-mile map of the route it took, following Marisol’s scent. (The map revealed, to their horror, that Marisol had crossed Interstate 93 several times, and basically circled back to where she’d disappeared.)

The Semperes, who are both 32, also did some old-school things, such as a flier campaign in the communities that surround the Fells. They made daily calls to police and animal control, and took long walks with friends through the Fells calling for Marisol.

Sometimes, just because they thought it couldn’t hurt, the Semperes would walk from the spot of the attack to their house in Medford, thinking they might establish a scent trail to guide Marisol home.

In some ways, the campaign was a success. People around the world read the blog and tweeted about it; the comments section became a place for people to console the Semperes and share the happy endings to their own lost-dog stories.

The campaign led to regular calls from people who believed they had spotted Marisol. There were reported sightings all over the 2,000-acre Fells and its surrounding communities — but none of them brought Marisol home.

That’s because, the Semperes came to understand, most of what they’d been doing was all wrong.

They were leading a search-and-rescue operation for a pet. But, specialists told them, after a day, maybe less, Marisol had stopped thinking like a pet. And as hard as it was for the Semperes to believe, Marisol was not looking for them to rescue her.

To get her back, they’ve come to understand that they cannot go to her. They need to get her to come to them. And to do that, they will have to hunt her like a feral animal.

This moment of insight came more than a week after they’d launched their round-the-clock campaign. That’s when they talked to Karin TarQwyn, a Nebraska-based pet detective who is considered a leading specialist in the field.

Marisol, TarQwyn explained to them, is a “roaming dog.’’ TarQwyn says there are nine scenarios under which dogs go missing, and the roaming dog is the most difficult to catch.

Marisol’s primary instinct had become her own security, and that meant avoiding people, even her owners. All those people out there calling for her in the Fells had put her constantly on the move instead of settling down into a regular area.

In addition to her instincts, Marisol also had proven abilities. That’s because little Marisol is a “Sato,’’ a Puerto Rican street dog.

Three years ago, the Semperes went to Puerto Rico with some friends to volunteer at a Sato shelter. They weren’t really planning on getting a dog. There were 200 at the shelter, and, independently, the Semperes each fell in love with the same shy, timid, mischievous dog that looked a lot like a fox.

As Andrew was plotting how to broach the subject with his wife (who had never had a pet in her life), Anindita called to him from across the shelter, pointed at Marisol, and said: “That one! Let’s take her home.’’

All the shelter knew about Marisol was that she was about 7 months old, had been born and lived in an abandoned factory, had been pregnant with a litter that didn’t survive, and had scars on her muzzle and face that revealed she’d been in fights.

When the Semperes took Marisol home, she blossomed immediately into a member of the family. She slept in bed with them and curled up on an armchair with Anindita each day while she typed at her laptop (she’s writing a young-adult novel).

But after the attack, she had become a street dog again. To get her back, the Semperes, working with TarQwyn, are trying to think like a street dog.

TarQwyn quickly implemented several changes to their campaign. The fliers were revised to remove any mention of calling for her. The photo was changed to a profile shot — how most people would see her — and stressed that people not try to catch her, but to simply report the sighting.

And while TarQwyn said the Internet has its place, she had the Semperes shift their focus to the roads, because it is drivers who tend to spot dogs. So the Semperes created lawn signs, similar to what candidates use, with a profile shot of Marisol and a phone number to call.

The strategy now is “locate, attract, capture.’’ If people stop chasing her (which is why TarQwyn is adamant that people not list rewards on their fliers), she believes Marisol will begin to travel a regular route. Once the Semperes can map it, they can lay out “comfort stations’’ that will use a small amount of food to lure her to a particular spot. When she gets comfortable returning there on a regular basis, they can try to trap her.

On a recent day, the Semperes went to the Fells to check the comfort station they’ve placed in an area where they think Marisol has visited.

The food hadn’t been touched, and there were no paw prints in the smooth sand they’d laid around the area.

They checked the motion-activated camera they’d installed on a nearby tree (which was delivered to them by two women from New Hampshire who heard about Marisol through the online campaign), but the only shots were of a squirrel.

They then went to a nearby neighborhood and did their daily round of posting fliers, and checking the ones that they’d already put up.

As Andrew stapled one to a telephone pole, he said the process has been tough. He’s a scientist. A rational thinker. But this is emotional, and he’s having a hard time accepting that there is no technology he can use, no program he can write.

But the next step belongs to a dog in the woods. The Semperes just hope it is one that brings Marisol closer to home.