Vice consul in Boston sings of horrors she lived through 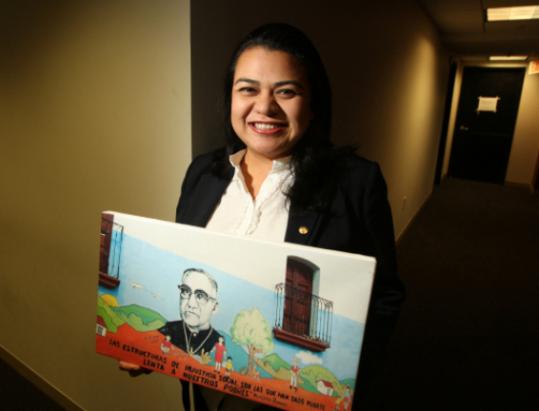 Ena Úrsula Peña was shuttled from house to house as a child to avoid government assassins when her mother, a labor activist, received death threats. Peña’s kindergarten teacher was burned with acid before a death squad dumped her corpse in a cemetery. And when Peña was 7, she attended the funeral of Archbishop Óscar Romero, who was shot while saying Mass.

Tonight, Peña, now the Salvadoran vice consul in Boston, will give voice to emotions that are as keenly felt as her passion for human rights and feminist causes.

Peña is part of the chorus of “Missionaries,’’ a folk oratorio based on the words and writings of three US nuns and a lay worker who were raped and murdered 30 years ago this past Thursday. For Peña, the suffering and horrors of the Salvadoran civil war, of which those women were victims, has a resonance that will never leave her.

“Missionaries’’ is being performed at 8 tonight at the Church of St. Ignatius at Boston College.

“All this experience, I think, makes me more sensitive to this kind of horror,’’ Peña said. “I strongly believe that when you keep the memory alive, there are less possibilities that it will occur again.’’

The memories, however, are deep and painful for Peña, who resurrects them every time she sings the words of the victims. When she attended the funeral of Romero in 1980, she had to flee as violence erupt ed.

“I remember I had to run away after bombs were detonated outside the church,’’ Peña said. “I lived that, the war.’’

The “Missionaries’’ choral drama, written by Elizabeth Swados and produced for this New England premiere by Isabel Cristina Legarda, includes excerpts from the letters and journals of the four church women, whose activism on behalf of the poor made them subversives in the eyes of the US-supported, military-led government in El Salvador. More than 75,000 people died in that country’s civil war, which lasted from 1979 to 1992.

Peña’s part in the production came largely by chance, she said, after a friend told her of a prerehearsal. Peña, who sang in the church choir when she was a child, auditioned and is now the only Salvadoran in the ensemble.

“It’s very moving for me and very healing,’’ Peña said at her office in East Boston, where a picture of Romero hangs over the consul general’s desk. “I always cry when I read the lyrics. You remember, and you cry, and you accept that and move on. That’s the point.’’

Although Peña, 37, has been a low-key presence at rehearsals and the first two performances, her participation has brought another level of meaning to the production.

“She’s a special witness and a moving connection to those events. I think it makes it all that much deeper,’’ said the Rev. Victoria Weinstein of the First Parish Unitarian Church in Norwell, who plays the role of Maura Clarke, a Maryknoll nun who was one of the four murdered women.

“This piece is personal to everyone in the cast for one reason or another,’’ Weinstein said. “These women were called to God’s work, and I feel like a sister to Maura and a sisterhood of ministry with her. I see all of them as fiercely strong, courageous women.’’

The importance of such art, Peña said, is to give dignity to victims of the war, particularly the civilians who did not take up arms but were targeted nonetheless. One such person was her kindergarten teacher. After being burned with acid that was tossed repeatedly from cars that circled her, Peña said, the teacher was shot in the head as she tried to rise.

“This is part of our story,’’ Peña said of El Salvador. “The story will never be denied. Because if you deny the story, you won’t be able to be a better person in the future.’’

Peña is now part of a Salvadoran government that is run by the party of the rebel alliance that fought the civil war. She has been posted since July in Boston, whose consulate covers the New England states except Connecticut.

And tonight, in a final performance, Peña will use her voice to keep alive the memory of four murdered women and rekindle her hope for a better future for El Salvador.