Gaps in education, income are cited 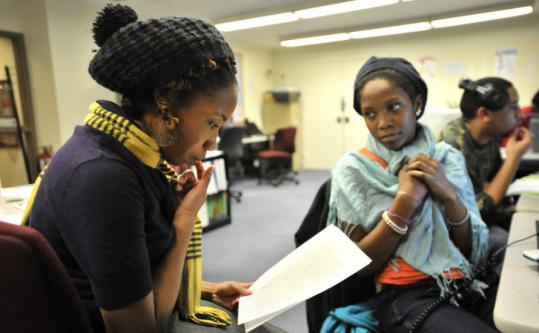 A wave of poor minorities is about to come of age in Boston, dominating the city’s workforce, raising children, and flooding “many spheres of life in this city,’’ according to a new study of blacks in Boston.

About a third of all blacks and Latinos in Boston are 17 or under while only about 13 percent of whites are in that age group, the report found. But many of those young minorities face educational and socioeconomic disadvantages, sparking concern among community leaders that they will not be equipped for the responsibilities that await them.

Unless policy makers, business leaders, and community-based organizations collaborate on ways to prepare them, the community leaders say, Boston will have a labor pool of unemployed, underemployed, or unemployable adults.

“We need to invest in them to make sure they have the skill set and competencies in order to effectively drive the engine or apparatuses to make this city work,’’ said Darnell L. Williams, president of the Urban League of Eastern Massachusetts, which commissioned the report with the Boston NAACP and the William Monroe Trotter Institute at the University of Massachusetts Boston.

The picture included some findings that highlighted long-recognized issues in Boston — significant disparities in jobs, income, housing, and education, adding up to what the report called “vast inequalities reflected in the life experiences of blacks and other people of color compared to whites.’’

The report said that in general, the large number of young minorities on the cusp of adulthood has gone largely unnoticed.

“It might not be melodramatic to exclaim that black and Latino children are spearheading a quiet demographic revolution in this city, with many kinds of social and economic implications,’’ Jennings wrote in his report.

The report found that about a quarter of Boston residents are black, and that about a third of those are foreign-born. Blacks had the highest rates of unemployment of any group, and half the household income of whites.

Particularly alarming, Jennings said, were the vast segments of minority youth living in families so poor that they received federal assistance to buy food — half of all school-aged blacks, a third of black kindergartners, half of Latino kindergartners.

“What shocked me is the number of black and Latino children in kindergarten who are on food stamps,’’ he said. “What are we doing today to make sure these children have opportunity to, as the old saying goes, move up the socioeconomic ladder?’’

With blacks over age 25 more than twice as likely as whites to not have a high school diploma while whites the same age are twice as likely to have a college degree, Jennings said the city is at risk of producing a lost generation.

Williams said he has met with Mayor Thomas M. Menino and city staff members, including Marie St. Fleur, Boston’s chief of advocacy and strategic investments, to discuss ways the city can address the issues highlighted in the report.

The Urban League has also organized a group of community, business, and civic leaders to meet periodically to plot solutions.

Parents raising Boston’s next generation of color said they are determined to make sure their children are equipped to contribute to the city in meaningful ways.

“I don’t have a college degree, but I’ve been blessed. I’ve worked for the same company for 25 years,’’ said Tinea Rochelle of Roxbury, who is black and a single mother of two. “That’s a reality that’s not going to happen for my children.’’

A college degree is a necessity in today’s job market, she said. Both of her children, 8 and 15, are enrolled in the Metco program, which allows city children to attend suburban schools.

She said she pushes her children, especially her teenage son, to focus on school and remember that youthful decisions about friends, academics, and relationships can have long-term consequences.

“When the time comes you want to be able to have choices,’’ she said she tells him.

Patrina Tucker and her husband, Christopher, also use their lives as examples for their sons. They grew up poor in Roxbury but graduated from college, which, Patrina said, is proof that you don’t have to be defined by your circumstances.

“Both of my children will tell you they are going to college. There are no if ands or buts about it,’’ she said of her 8- and 9-year-old sons.

Jennings’s report is the first of a planned series examining in detail issues in Boston’s minority communities, a series that will culminate next year with recommendations for solutions.