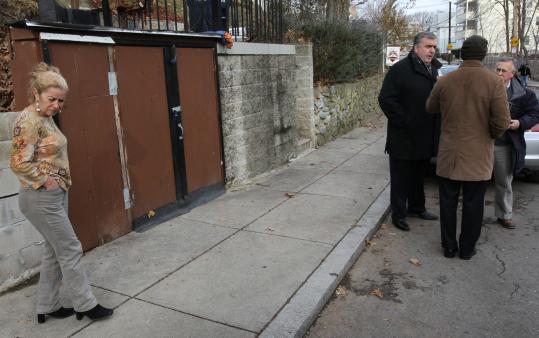 Boston Police Commissioner Edward F. Davis (at left in group) visited the street in Roslindale where a man was found dead in a car yesterday morning. “There is some evidence here. We believe it may be a narcotics-related incident,’’ Davis said. (David L. Ryan/Globe Staff)
By Brian R. Ballou Globe Staff / December 4, 2010

Residents of a hilly street in Roslindale awoke yesterday morning to police working around a gold-colored , where the body of a man believed to be in his 30s was discovered in the back seat, the apparent victim of a fatal shooting, authorities said.

Eugenia Scanlan said she was doing laundry and other chores early yesterday morning and walked outside and saw the Honda parked on the street.

“And the back door was open with feet outside. I thought to myself, ‘Oh my God, what happened there?’ And the police came and talked to me, told me what happened,’’ said Scanlan, 53, who has lived on Rowe Street for about seven years. “Nothing like this has happened before. It is so scary.’’

“There is some evidence here. We believe it may be a narcotics-related incident,’’ Davis said. “It is a very quiet neighborhood, a place where we haven’t had any difficulty before.’’

The car was parked along the curb in front of Scanlan’s house. Residents said they had not seen the vehicle on the street before.

Police were alerted by a 911 call from a cellphone and arrived at 7:28 a.m. By 9:30 a.m., the body had been removed by the state medical examiner’s office.

It was unclear yesterday if the 911 call came from a resident. The victim was shot multiple times, police said. His identity has not been released by police.

Another resident, who declined to give his name, said he saw several people in two cars, neither of which was the Honda, chatting late Thursday night in front of his residence, near where the body was discovered. He said he activated the alarm on his truck several times in an attempt to get them to leave and even told them to “move on.’’

“Sometimes you get strangers just hanging out around here; I don’t know why,’’ the man said.

Modest triple-deckers sit atop a hill on one side of Rowe Street, and the other side is covered by trees and bordered by a chain-link fence near MBTA rail tracks.

The latest homicide victim is the 71st so far this year, compared with 45 by this date last year, according to police.