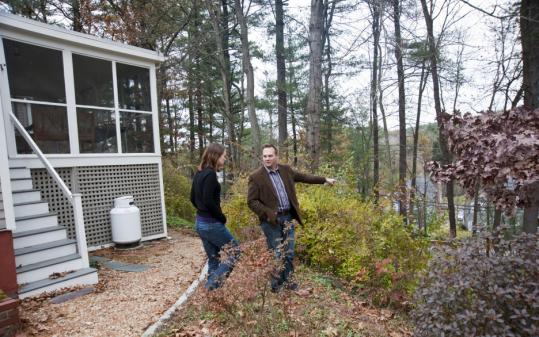 With real estate supposedly ripe for the picking, Adam Waitkunas and Kelly Mitchell hoped to buy a home in an affluent suburban community without having to pay traditional Weston, Wellesley, or Lincoln prices.

But after months of house hunting, the young couple from West Concord reached the conclusion that there are no easy bargains to be had.

So the two spent a recent Sunday afternoon comparing the merits of a pair of renovated Capes, one in Lincoln, the other in Weston.

The four-bedroom house in Lincoln was pleasant, and at less than $600,000 was the least expensive property for sale in town. Yet the drone of traffic from Route 2, while undetectable inside, was unmistakable from the yard.

The three-bedroom house in Weston was priced in the $700,000s, but came with its own potential noise issue as well, in the rush of a nearby commuter rail line.

“We go from Route 2 to the train,’’ quipped Waitkunas.

Despite one of the worst real estate downturns in generations, even relatively well-off buyers with hopes of getting a bargain in some of the area’s tonier communities are getting a quick reality check. While prices in many higher-end suburbs have leveled off, median sales prices remain lofty. Homes that come on the market in the lower price ranges in good condition and solid locations go fast, triggering bidding wars reminiscent of boom times, real estate agents say.

For most people seeking a bargain in these towns, a home search can boil down to grappling with what drawbacks you can live with.

“I would like to have at least two bedrooms on the same floor,’’ Mitchell said. “We are realistic. We know we are not going to get a 5,000-square-foot house.’’

Median home prices vary across the area’s more-affluent communities, from Weston’s stratospheric $1,087,075 to Concord’s relatively down-to-earth $680,000, according to an industry analyst, the Warren Group.

“A lot of people want the school system and a lot of people just want the address,’’ said Lesley Palmiter, an agent with the William Raveis real estate company who specializes in Wellesley, among other area towns.

But homes on the market for two-thirds or less of a community’s median price are few and far between. Only 10 homes in Concord were on the market for less than $455,000 on the recent weekend when Waitkunas and Mitchell were house hunting, compared with 107 homes listed above that price. In Weston, where more than 100 homes were on the market, only 11 were priced below $725,000, according to Dianne Schaefer, with 4 Buyers Real Estate in Cambridge, citing MLS Property Information Network statistics.

For those looking for bargains, there are two rough tiers of homes to pick from, say brokers and buyers. At the very bottom are homes whose prices are too good to be true — typically for a good reason.

Schaefer said she recalled taking one couple, determined to get the cheapest house they could find, to a $280,000 listing in Belmont. Not only did the house’s interior have extensive water damage, but the backyard ran right up to railroad tracks, she said.

“Location is the one thing you can’t change,’’ Schaefer said.

Many buyers hoping to crack a coveted community at less than full freight wind up competing for a somewhat wider band of homes in the $350,000 to $700,000 range.

Lower-priced homes in good condition and in solid locations can easily spark bidding wars, with calls for offers the day after the open house, Schaefer said.

“Any house that is in good, presentable condition and it’s a reasonable price gets snapped up immediately,’’ she said. “Some of the brokers try to start bidding wars.’’

Eugene Wang and his wife, Rachel Chen, who have been looking for a home in Lexington for a year now, know all about bidding wars, which came as a shock given the tough economy.

To save money, the couple and their toddler are living with Wang’s parents in Bedford.

Wang, who works in information technology, recalls his frustration after showing up at an open house for a ranch in Lexington that had hit the market for $380,000, right within his price range. Not only that, it was in good condition and on a quiet side street.

“It was maddening,’’ Wang recalled. “We went to the open house and people were climbing all over themselves. It was under agreement in a week.’’

When there’s not a bidding war, then there are often major repair and renovation issues.

“In our little price range, everything at some level is a fixer upper,’’ Wang said.

For Alex Feinman and his wife, Jennifer, shopping for a lower-cost home in some of the more expensive suburbs has been a sobering experience as well.

Feinman said he believes homeowners, if they don’t have to sell, are holding back. “We have been looking on and off for six months,’’ he said. “There is not a lot of stock and no one wants to sell at a loss.’’

Waitkunas, 32, and Mitchell, 27, who have been living in a rented condo, said they found there are tradeoffs even in a house listed at nearly $750,000.

Standing in the basement of the Weston home, they questioned whether it was worth more than the Lincoln home they had seen earlier that day.

Yet, in the end, the decision may not be theirs to make.

The broker, Carole Milott, when contacted a few days after the open house, said she already had an offer.