Neighbors not sold on DeLuca’s plans 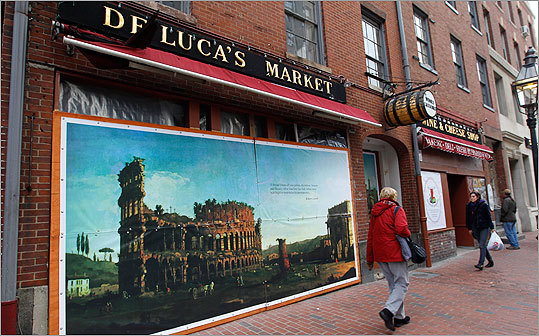 Owner Virgil Aiello would like expand his Charles Street market (above), which is being rebuilt following a July fire, but his plan faces opposition. (Joanne Rathe/ Globe Staff)
By Billy Baker Globe Staff / November 29, 2010

Virgil Aiello is in the middle of a food fight on Beacon Hill, and just about the only thing everyone can agree on is this: They’d like DeLuca’s Market, which was gutted by a fire in July, to reopen, and they’d like it to be better than it was.

What exactly that means for the 105-year-old Charles Street institution is precisely what they’re fighting about, and where you stand on the issue depends a lot on whether you think Aiello, the latest generation of his family to own the gourmet grocer, is a victim or a villain.

A retired attorney who spent 27 years as a Naval intelligence officer, Aiello, 69, is tall and lanky and has been told more than once that he sounds like the tough-guy actor Chazz Palminteri. He places himself firmly in the “victim’’ camp, calling himself the target of an overly zealous smear campaign that began when he asked the community for something.

The way Aiello frames it, he isn’t asking for much, at least not for a business that’s been an icon of the neighborhood since before most people were born: He simply wants to expand his market into a ground-floor studio apartment he owns at the back of DeLuca’s, then replace that apartment by building up 8 feet on top of it.

But now that he’s asking for something, people are no longer treating DeLuca’s like a beloved part of the Beacon Hill village, as Aiello likes to describe it; they’re treating him like the help.

The opponents of his plan — including the powerful Beacon Hill Civic Association and City Councilor Michael Ross — say that even if Aiello were a model shopkeeper, beloved by neighbors, it would be almost impossible for him to get what he wants, which is to build on a flat roof and extend a commercial operation onto a residential street. In a historic district where residents must go before an architectural review board before they can so much as paint their front door a different color, opponents argue that Aiello’s project would set a dangerous precedent.

Besides, many in the neighborhood contend, Aiello is not a model shopkeeper and a beloved neighbor.

“Virgil certainly has his own story,’’ said Tom Clemens, chairman of the zoning and licensing committee of the civic association. “But there are neighbors who can read you chapter and verse on the number of times the city has been called for permit violations, unauthorized work, architectural violations, changes to the exterior, placement of Dumpsters, blocking the street with cranes and construction equipment.’’

At this point, Clemens said, Aiello has created a fait accompli. Even before the fire — which was caused by an electrical short circuit in the basement, according to the Boston Fire Department — Aiello had gutted the apartment where he wanted to expand, and excavated the basement. Now that he’s rebuilding the shop anyway — just as the family did following another fire 27 years ago — he’s trying to push ahead with his plan, opponents say, even though it had been rejected by the civic association before the fire and has not been amended.

“He continues to want to build what he wants to build, and now has used the most recent fire as further justification to do so,’’ Ross said. “We’re having the same conversation. We’re repeating ourselves. And I have to tell you, I think the neighborhood is being reasonable.

“If you go back there now, it’s like a construction site,’’ Ross said, referring to Aiello’s removal of large portions of the brick exterior, now covered in blue tarp. “There’s no attempt to win people over.’’

Whatever sympathy there may have been for Aiello after the fire seemed to have evaporated just a few days later, when Aiello moved quarantined food from the fire site to the other DeLuca’s on Newbury Street. When that violation was caught by city inspectors, the Newbury Street market was shut for several days.

Aiello, who has been cited numerous times by city inspectors for health and building violations, admits he has made mistakes (he repeatedly points out that it was canned goods and water that he moved, and none of it was ever sold), but insists most of the incessant faultfinding of his neighbors is unfounded.

DeLuca’s has a long history of providing gourmet, hard-to-find foods for the hoity and the toity and the Kennedys, but many in the neighborhood paint a picture of a business that has not been the same since the 1998 death of Joseph DeLuca, Aiello’s uncle who bought the business in 1919. After DeLuca’s death, Aiello prevailed in a bitter estate battle that divided the family and led Aiello’s brother Gerry to compare him to Saddam Hussein in a Boston Herald article.

Aiello acknowledges that some maintenance and equipment updates had been put on hold as he tried to get approval for his expansion, but claims the food has always been top-shelf.

“They just don’t have the background that a European would have,’’ he said of those who criticize his food. “When a European comes into our shop and sees the cheese case, they’re incredulous because they’ve never seen anything like it in America.’’

But Russ Gaudreau, chairman of a subcommittee of the Beacon Hill Civic Association charged with trying to find common ground between Aiello and the neighbors, disagrees.

“People who do use his store complain pretty constantly about the quality of the product compared to the price,’’ Gaudreau said.

Aiello, who lives in Milton now but raised his children on Beacon Hill and owns several properties in the neighborhood, said he doesn’t want to get into a game of name-calling with his neighbors, many of whom refused to do their Aiello-bashing on the record.

“That’s a statement unto itself as to what I’m dealing with,’’ he said.