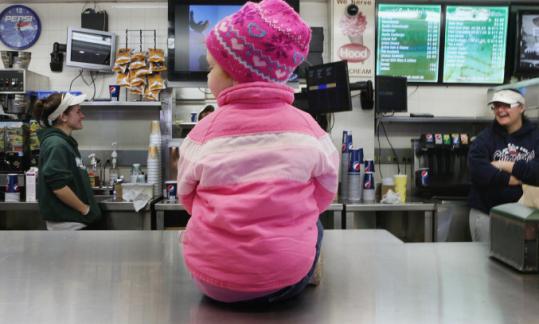 Cate Martin, 3, waited for a cheeseburger at Sullivan’s yesterday. Today is the last day of operation for the season. (Wendy Maeda/Globe Staff)
By Matt Byrne Globe Correspondent / November 28, 2010

He was on a mission, sent from his home in Quincy, with one objective in mind.

“I ordered French fries, for my wife, who has Alzheimer’s,’’ said Cruise, 84. “I know she likes those. If I come down here, I gotta give her something. If I don’t have fries I’m in trouble.’’

Cruise was one of many who braved a stiff wind and a brisk chill yesterday for the last chance — at least for a while — to chow down at Sullivan’s, the venerated hot dog shack that has stood on Castle Island for nearly six decades.

The grill will close for three months at the end of today, mark ing a brief pause for the owner and staff who churn out hot dogs and burgers by the hundreds, seven days a week.

Some patrons came yesterday from miles around. Others live barely outside the two-mile walking track that marks the perimeter of the 22-acre park on Pleasure Bay.

And this weekend they are getting a bargain. For the past month, Sullivan’s has halved its price for a basic dog to draw customers, and plans to run the same promotion when it reopens in late February.

Brother and sister Mike and Holly Parker, South Boston natives who have been coming to Sully’s for years, were “devouring’’ their food at about 11:30 a.m.

“I’m like, so hungover right now,’’ said Mike Parker, 28, speaking from the passenger seat of his sister’s car. In his lap was a box containing fries and a double cheeseburger.

“This greasy food is helping,’’ he said, laughing.

Holly Parker, 25, who works at Marian Manor nursing home, said she was on her lunch break when the idea struck to take a trip with her brother down William J. Day Boulevard to the place where hot dogs are still cheap.

“They could be open all year,’’ Mike Parker said, of the imminent, annual closing. “They choose to do this to tease you.’’

Brendan Sullivan, who bought the business from his father in 2007, would probably disagree. He said he plans to spend the winter improving his business and taking some time off.

Sullivan, the third in his family to run the store, said he plans to install energy-efficient lighting and new tile in the kitchen, his latest effort to go green. Reflecting from atop the pitched roof are 27 solar panels, visible from the parking lot, which Sullivan said were installed about a month ago to help with energy costs.

The business is in its third physical incarnation, with many of the senior patrons reminiscing about the old Sully’s, which was truly a shack, they said, and sat about 100 yards from the site of the current establishment and closer to the seawall.

One thing has not changed, however: The line will inevitably snake around the parking lot when the store reopens, and with it the flurry of hot dog orders that will nearly overrun the roughly two dozen employees.

“That’s why my grandfather started it, to keep prices low for the locals,’’ said Sullivan, who added that volume and weather drive his business.

Tradition also dictates that when the store reopens Feb. 26, hot dogs will be sold for half price.

But next year, in honor of the 60th anniversary, the famed “snap dogs’’ — so named for the sound they produce when first bit — will be sold for 60 cents, below the November special of 80 cents.

Sullivan said he barely makes money during November, when the store halves the price of a basic dog, in appreciation of its loyal customers.

And yesterday that loyalty flowed two ways, as Scott Collins, 32, of South Boston, sat perched on a block of granite next to the store, wind whipping at his clothes.

“If you want to go in November, you got to deal with the November weather,’’ said Collins, who has been coming to Sullivan’s for as long as he can remember. “Sully’s or Fenway, that’s the only places I eat hot dogs,’’ he said.

Inside, meanwhile, Michael Cruise waited patiently for his fries, and said he comes to the island often with his wife to walk, but during winter he pines for a stop at Sullivan’s.

“I miss it,’’ Cruise said, in a lilting brogue. Cruise emigrated from County Mayo in Western Ireland around the time when the first grilled dogs and burgers were feeding folks in Southie visiting the fort.

“When I come down here I always see someone I know,’’ he said. “It’s like the old country.’’

Globe Correspondent Matt Byrne can be reached at mbyrne.globe@gmail.com.