The next sculpture to grace Greenway is work of local artist 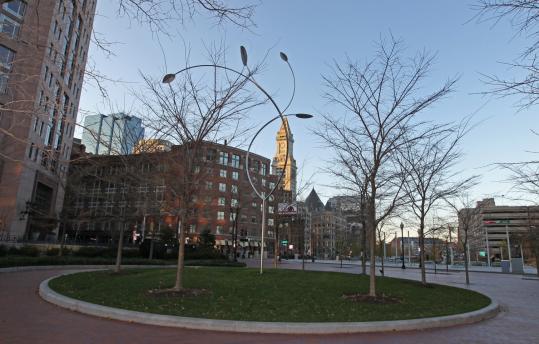 For nearly 18 months, “Botanica’’ stood its ground on the Rose Fitzgerald Kennedy Greenway — a spiry 35-foot-tall stainless steel sculpture with leaves rising to the sky.

By next month, a new work of art will be in its place as the second temporary installment at the Greenway’s Urban Arboretum, across from the Boston Harbor Hotel at Rowes Wharf.

The newly selected sculpture is a 22-foot high free-standing work by South Boston artist Jacob Kulin, whose piece was selected for the exhibit this week by the Greenway Conservancy.

Kulin’s winning display is an abstract sculpture crafted from wood and steel to resemble a human body in dance motion, he said.

“This is a grand opportunity to be front and center on Boston’s runway — the Greenway,’’ Kulin said in a phone interview yesterday.

Kate Gilbert Miller, the conservancy’s director of public programs and outreach, stressed that before the unveiling, the sculpture must meet the approval of the Boston Arts Commission and the Massachusetts Department of Transportation, which owns the Greenway land.

Officials will conduct engineering and safety checks to ensure that the sculpture can withstand heavy winds and other stresses it may be subjected to on the Greenway, Gilbert Miller said.

If the sculpture sails through the approval process, she said, it will be unveiled during the conservancy’s Bright Lights for Winter Nights celebration on Dec. 21.

“We want to make sure that we can deliver a beautiful piece of artwork that is safe’’ for the people who use the Greenway, she said.

Visitors are seemingly hungry for public art on the Greenway. In a survey by the Greenway Leadership Council, Gilbert Miller said, respondents ranked public art as the number one feature they would like to see more of on the parkland.

“We feel that we are responding the public’s interest in more artwork,’’ she said. “We think public art really ties together the great architecture, the great institutions, educational and cultural . . . and helps them liven the Greenway.’’

The Greenway, which attracts 1.5 million visitors each year, has several permanent pieces of artwork that were selected as part of the Central Artery Project, Gilbert Miller said, and the conservancy had long planned to install several other temporary sculptures on the parkland.

A lack of funding and the complex process for such installations forced the conservancy to scale back those plans early on, but then a private donation made it possible for the 18-month stint of “Botanica,’’ which has been on display since July 23, 2009.

The artists were asked to choose work based on quality, durability, and suitability for an outdoor environment, as well as public safety. The winning sculpture must also fit the site on the arboretum parcel and is subject to approval and engineering review by city and state agencies.

Kulin will receive a $5,000 stipend from the conservancy to cover transportation cost, installation, maintenance, removal, and insurance for the artwork.