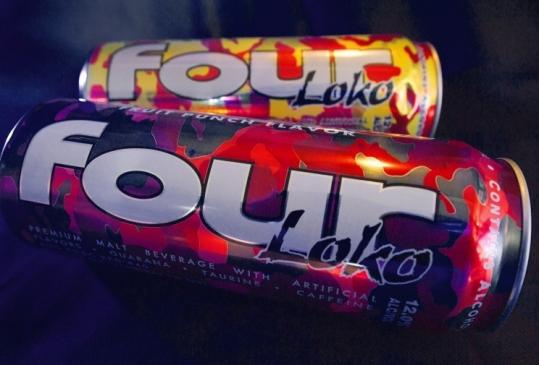 Four Loko and other alcoholic drinks containing caffeine were to be removed from store shelves by the end of yesterday. (Paul J. Richards/AFP/Getty Images)
By Martin Finucane and Travis Andersen Globe Staff / November 19, 2010

The state Alcoholic Beverages Control Commission is banning alcoholic drinks that contain caffeine as an added ingredient, after concerns were raised about Four Loko, a powerful drink that some college students have dubbed “blackout in a can.’’

“Public health and public safety are top priorities at the Alcoholic Beverages Control Commission,’’ said Kim Gainsboro, the chairwoman of the board.

The Food and Drug Administration had warned four manufacturers of caffeine-alcohol drinks, including the maker of Four Loko, on Wednesday that the caffeine in such beverages was “an unsafe food additive’’ and further action against them was possible.

Nick Frohne, a cashier at Mall Discount Liquors and Wines in Brookline, said Four Loko has been a hot seller in the past week as word of the impending ban spread. “It’s been crazy ever since,’’ he said.

Frohne said the store received its last shipment of 12 cases of the beverage yesterday morning and sold them all by 4 p.m.

While the beverage is believed to be aimed primarily at college-aged drinkers, Frohne said the customer who bought the most Four Loko yesterday was a well-dressed man in his mid-30s.

Frohne said he did not expect the Four Loko ban to hurt sales at the store, since customers can still purchase alcohol to mix with caffeinated drinks such as Red Bull.

Specialists have raised concerns that the caffeine in a drink could mask some of the sensory cues that people rely on to determine how intoxicated they are.

And drinking the beverages could lead to risky behaviors and hazardous situations, the FDA said.

Gainsboro said the emergency state regulation would last for 90 days. But she indicated it was not likely that Four Loko and the other drinks would make a comeback in Massachusetts.

The FDA has said that alcoholic drinks that contain added caffeine are unsafe for consumption. Unless the FDA retreats from that position, “I can’t imagine that the ABCC will change its mind,’’ Gainsboro said.

A customer at Blanchard’s Liquors in Allston said she welcomed the Four Loko ban.

“Because (a) it’s disgusting, (b) it makes people obliterated, and (c) it’s dangerous,’’ said Melina Parpas, 21, a Boston University senior. “I think it’ll keep kids out of trouble.’’

Her friend, Nicholas Drew, 21, also a BU senior, held an 18-pack of Rolling Rock outside the store and said he prefers beer to malt beverages.

He said he was ambivalent about the ban and had never tried Four Loko.

“I just compared it to [the caffeinated alcoholic drink] Sparks,’’ he said. “I always thought it was disgusting.’’

The board said wholesalers were required to pick up the products at or before their next delivery, but no later than Dec. 3.

“Our members are responsible retailers,’’ Frank Anzalotti, executive director of the Massachusetts Package Stores Association, said in a statement. “Now that a decision has been made by the Alcoholic Beverages Control Commission to ban alcoholic drinks containing caffeine, we have begun the process of notifying our store owners to ensure full compliance with the law.’’

Phusion Projects, the maker of Four Loko, had already announced Tuesday it would remove the caffeine from its potent drinks.

Four Loko jammed several drinks’ worth of alcohol and a jolt of caffeine into a single can. Following high-profile cases in which college students in Washington and New Jersey were hospitalized after drinking the malt beverage at parties, administrators at schools across the region, including Harvard, Northeastern, and Boston College, warned students that Four Loko was dangerous, the Globe reported this month.

The state alcohol commission had moved to redefine the malt liquor category this week, essentially reclassifying them as hard liquor, in a bid to restrict sales of the drinks. But the board decided to take a tougher stand after the FDA announcement Wednesday, Gainsboro said.

“We really felt like we couldn’t wait,’’ she said.

Martin Finucane can be reached at mfinucane@globe.com; Travis Andersen at tandersen@globe.com.