For bikers, walkers, a positive step 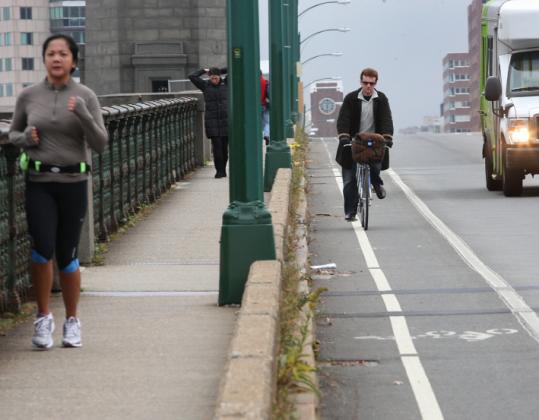 A Longfellow Bridge task force worked over the summer and fall and came up with ideas that would make the span more friendly to thousands who cross on foot or bikes. (Suzanne Kreiter/Globe Staff)
By Eric Moskowitz Globe Staff / November 19, 2010

The state’s highway officials are considering a plan to narrow the Longfellow Bridge’s Cambridge-bound side from two car lanes to one to provide nearly twice as much space for walkers and bikers.

The step would mark a significant achievement for the environmentalists and other advocates who see the Longfellow as a prominent test of whether officials are serious about reversing decades of public policy favoring cars over other forms of transportation.

The highly visible and badly deteriorated Longfellow is the centerpiece of the state’s $3 billion Accelerated Bridge Program, an effort to repair hundreds of dilapidated structures.

Officials had been proceeding with plans to rebuild the Longfellow largely as is, but they put those plans on hold in May, acknowledging a growing chorus calling for something bolder — to make the Longfellow more of a bike-and-pedestrian-friendly extension of the Esplanade.

Advocates of the change say it would demonstrate the state’s commitment to recent state and federal policy changes aimed at getting people out of their cars. Such efforts are necessary, they say, to fight problems including obesity, urban congestion, and pollution that causes climate change.

The options now being considered by the state were rec ommended by a Longfellow task force and would substantially improve the bridge for bikers and pedestrians without dramatically disrupting car traffic, said Luisa Paiewonsky, the Department of Transportation’s highway administrator.

“There was strong consensus on the task force that the bridge needed to be able to better serve all of the groups and get them across the bridge safely,’’ said Paiewonsky, adding that the state would probably take more of a “modern outlook’’ on the bridge as a result of the task force.

Steven E. Miller, a task force member representing the nonprofit LivableStreets Alliance, said the Department of Transportation “deserves real credit for being open and listening and ending up much more flexible than anyone had anticipated in the beginning.’’

The Longfellow, which has spanned the Charles River between Boston and Cambridge for more than a century, is widely known as the Salt and Pepper Bridge because of its distinctive shaker-like towers. Each weekday, it carries nearly 100,000 transit riders on the MBTA’s Red Line, as well as roughly 25,000 cars and a few thousand foot and bike travelers. In a quirk of traffic, more cars cross toward Boston than Cambridge in both the morning and evening.

Because the 105-foot-wide bridge is a landmark, it will not be widened, and the state has no plans to alter the 27 feet in the middle occupied by the Red Line. The remaining 78 feet are subject to debate.

The state initially planned to shore up the Longfellow and restore its historic grandeur while largely preserving the existing layout, with two motor vehicle lanes in each direction — widening to three on the Boston approach at Charles Circle — and relatively narrow bike lanes and sidewalks.

As less controversial construction began on the bridge in the spring — including the relocation of utilities that run beneath it and preliminary restoration of the steel arch ribs — the state convened the 36-member task force through the summer and fall. Its members represented an array of agencies, institutions, neighborhood groups, and businesses.

That task force signed off this week on its final recommendations, a 40-page document that presents an assortment of ideas and designs for configuring the bridge’s surface and approaches.

The task force — which included representatives from Massachusetts General Hospital, TD Garden, WalkBoston, and the Charles River Watershed Association — developed about a dozen alternative configurations while agreeing that the design must be wide enough to let emergency vehicles pass even in stretches with only one lane.

The group suggested that even if the state maintained two lanes in each direction, officials should consider placing the “crash barriers,’’ structural elements that will be in place for decades, in a way that would make it easier to increase space for bikers and walkers in the future. But a majority of the task force members recommended that the state reduce the vehicle lanes from two to one outbound, even if two lanes are maintained inbound.

Paiewonsky called that an intriguing suggestion for state engineers, who have previously treated the bridge’s two halves as mirror images. But she stressed that the state would thoroughly evaluate all of the alternatives before making a decision.

State Representative Martha M. Walz, whose district crosses the bridge and who advocated for the state to reconsider its earlier designs, said the “final test of the task force’s work will be what MassDOT does with the information.’’ Walz, a task force member, added that she is “especially pleased that we are considering the inbound and outbound lanes separately.’’

Transportation officials are unlikely to pick a preferred design until early in 2011, when the state will submit a document known as the Environmental Assessment for review by the Federal Highway Administration, which has oversight on the project and could reimburse 80 percent of the cost.

As the state evaluates the alternatives, the case for shifting more bridge space to nonmotorized users has been aided by the closure this month of the nearby Charles River Dam Road inbound for the reconstruction of the Craigie Drawbridge. Motorists have found alternate routes with less disruption than officials predicted.

“I was personally astounded at how fast people adjusted,’’ said Miller of LivableStreets. “That says to me that we can shape a transportation system — including the Longfellow Bridge, which will be there for the next 75 to 100 years — to reflect the changing world realities that we know our society has to deal with: pollution, congestion, rising fuel costs, [and] the need to promote healthy, active transportation.’’