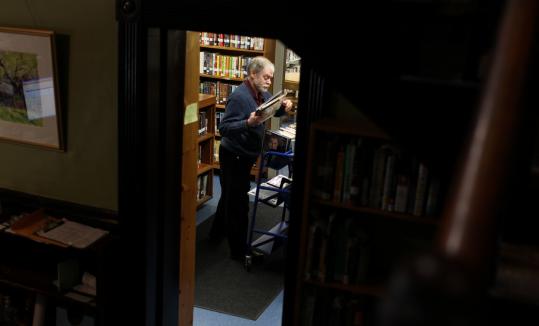 Two years ago, the Hull Public Library received some excellent news. The small library, shoehorned into the small rooms of an old summer home on Main Street, had received $2.8 million from the state for a long-desired expansion of the building.

But the money came at a bad time. In order to claim it, the town had to raise the rest of the money for the project, estimated to cost more than $6 million. The economy had crumpled in the few years since Hull had put together its library expansion plan. As the town struggled to pay for basic services, officials decided not even to ask voters for extra money for the library. The money from the state would not be claimed. “We just couldn’t raise money here locally,’’ said Daniel Johnson, library director.

The same story played out in towns and cities across the state, which planned new library buildings and expansions in flusher times. By 2008, when the state had awarded 31 communities grants worth about $97 million, the economy was starting to crumble. So far, only 11 of those projects have been built. Three other towns — Boxford, Dighton, and Woburn — are still trying to get local approval to raise their share, about 70 percent of the total cost. The bulk of the communities — 17 towns and cities that had been awarded a total of about $58 million — couldn’t come up with their portion of the cost and had to turn down the state money.

“The state’s giving away money and people aren’t getting it,’’ said Linda At kinson, a member of the board of directors of the Belmont Library Foundation. Belmont was another town that was awarded a grant two years ago and had to decline the funds.

The Board of Library Commissioners is now trying again to give away the money. Towns and cities had to let the board know last month if they were planning to apply for a grant, and 35 communities — including some, like Belmont, that couldn’t use awards from the last grant cycle — have said they’ll submit applications. This time, the board is offering to pay as much as 50 percent of the cost of library construction projects.

“The Board of Library Commissioners really wants to see libraries built,’’ said Rosemary Waltos, a library building consultant for the board. “And we felt, with the economics the way they are, a more generous grant would be an incentive for cities and towns to approve these projects.’’

State officials say that as communities have been reluctant to approve money for new libraries, more people are using their local branches. Across the state, visits to libraries increased nearly 50 percent over the past decade, to 33,945,352 this year, according to the Board of Library Commissioners. And significantly more patrons are heading to the library to use a computer: Between 2000 and 2010, weekly Internet sessions increased 129 percent, to 160,515.

The story from towns and cities that applied for and received state grants for library projects, only to have to turn the money away, is often similar. Library supporters and officials have spent years raising support and money. They’ve hired architects and acquired land. Plans have been drawn and revised. And in the end, they had to let millions of dollars slip away.

Some towns have decided to wait out the economy before they try again to raise money for their library projects. “At this point, any plans for renovation or expansion are tabled,’’ said Rebecca Freer, director of the Norwell Public Library.

The library opened in 1973, with about 15,000 items in its collection. Now, the library has about 65,000. That means when the library buys new books or other items for its collection, staffers need to get rid of something else to make room.

The space is small enough that it hampers programming, Freer said. The children’s room only has room to seat six children.

Electronic books that can be downloaded help ease the crunch a bit, she said. But the number of library users continues to increase.

“Even in this time of Kindles and Nooks and e-readers, people are looking to connect with each other,’’ Freer said. “And I don’t think that’s ever going to go away.’’

In Upton, library officials had tried several different plans to get a new library built. “We have actually been trying to build a new library for 12 years,’’ said Matthew Bachtold, the library’s director.

First the town worked with its neighbor, Mendon, to create a joint library. But taxpayers in both towns voted against spending money for the project. Then a developer who was building in town agreed to donate a piece of land for a new library in Upton.

But just about the same time the state approved giving $2.8 million to Upton for the project, the developer ran into financial problems and the deal fell apart. The state wouldn’t allow the money to be spent on library construction at a different site, so town officials didn’t even bother asking voters for money for the project, Bachtold said.

Finally, in the past year, the town found another piece of property available for building. But voters rejected spending about $20,000 for architectural drawings for the building.

“Seeing even that small amount get turned down was kind of a sign to us to put the project on hold for a little while until the town was in a better financial position,’’ Bachtold said.

The last project was designed to be built without state money. Library officials decided to plan a project that was smaller than the Massachusetts Board of Library Commissioners allowed, calculating that they would spend less for a smaller library, even without state help, than they would for a larger library with a grant from the state.

“Since we were so desperate to move on, we thought it would be better to do something that wouldn’t meet all the requirements of a perfect library but maybe would get built,’’ he said.

Five of the communities that couldn’t raise money for a new library in the last grant round are planning to try again, and apply for another state grant next year.

“Still, local communities do have to come up with a significant amount of money,’’ Johnson said. “When we looked at the economy and the uncertain fiscal future, we decided that, no, we would not apply.’’

It’s been a tough year for the library. In the summer, the library had to close for a few days, after a pipe burst and water flooded the building. A few months earlier, the library was decertified by the state after town selectmen cut the budget by nearly two-thirds. Some of the money was restored, and the library was eventually recertified.

The library is housed in an 1890 building, originally the summer home of John Boyle O’Reilly, editor of the Catholic weekly newspaper The Pilot.

“It’s basically an old house,’’ Johnson said. “It is very nice and charming, but it doesn’t translate too well into a public building.’’

Some did, some couldn’t
Libraries south of Boston that used money from the Massachusetts Board of Library Commissioners to build libraries:


Communities south of Boston that were awarded money by the board but could not use it:
Source: Massachusetts Board of Library Commissioners