Patrick to focus on change for immigrants

Says he wants to integrate foreign-born into state 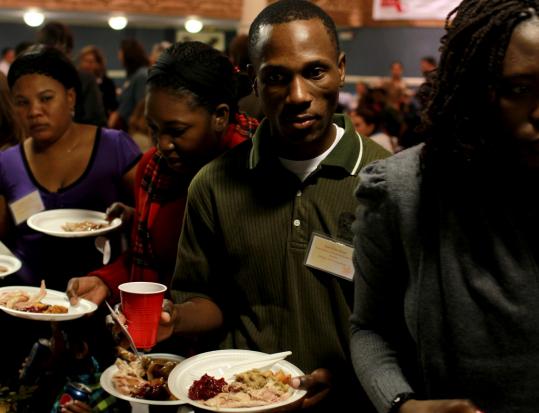 Governor Deval Patrick, fresh from a bruising campaign in which he was sharply criticized for his positions on immigration, vowed yesterday to spend the next four years pushing for changes for legal and illegal immigrants alike, reigniting a debate that consumed the state only a few months ago.

Speaking to thunderous applause at a Thanksgiving luncheon for immigrant advocates, Patrick promised to advance an ambitious agenda he launched during his first term to integrate immigrants into Massachusetts. He said he wants to implement all 131 recommendations contained in an administration report last year, which includes controversial measures such as in-state tuition at public colleges and driver’s licenses for illegal immigrants.

“Now, as we stand on the threshold of another four years, I want to commit to you that we will implement this report in its entirety, working with you over the next several years,’’ Patrick said.

The statement immediately touched off a firestorm of criticism as the newly reelected governor revived issues that dogged him in his first term. In one of his first acts as governor in 2007, Patrick overturned a controversial pact by his predecessor, Mitt Romney, to have the State Police help enforce immigration law. Since then, Patrick has received criticism over his support for in-state tuition and driver’s licenses for illegal immigrants.

Patrick’s 10-minute speech at Tremont Temple Baptist Church in Boston cheered advocates who praised his achievements during his first term, such as fighting for health care for legal immigrants and finding ways to better integrate them into Massachusetts. The 131 recommendations also include expanded English classes, professional opportunities for immigrants, and better access to state agencies.

“Providing in-state tuition to illegal immigrants should not be a priority of Governor Patrick, and the fact that it is does not shock me, but it certainly disappoints me,’’ he said. “This idea failed miserably in the Legislature a few years back, and I am confident it will do so again.’’

“On Tuesday, Nov. 2, these voters raised Governor Patrick’s totals in every major immigrant city in the state,’’ she said.

Yesterday, Patrick cautioned supporters that even though he supports in-state tuition and driver’s licenses for illegal immigrants, many of the changes are beyond his power as governor.

“You can’t do it without some changes in federal law in both of those cases,’’ Patrick said. “Working with the federal government is the only way we’re going to be able to move those forward. But I still think they’re right.’’

Patrick said it would be better to tackle the illegal immigration issue on a larger scale than dealing with smaller issues piecemeal. He vowed to work with Congress to pass an immigration overhaul and create a path to legal residency for illegal immigrants.

“I’m going to do everything I can within my power, because I think the recommendations are sound,’’ he said. “We need comprehensive immigration reform at the federal level. I hope that the Congress will take it up, and I look forward to working with them as they do.’’

In-state tuition and driver’s licenses were among the top changes called for by immigrants who participated in the report. The report is part of his New Americans Agenda, which Patrick commissioned in 2008 to find ways to better integrate immigrants into the state. The group released its recommendations at the same luncheon last year.

Massachusetts had tried several years ago to pass a law granting in-state tuition to illegal immigrant students, saying it would bring in $2.5 million in revenue a year if 600 students enrolled. But the measure failed in the House.

In May, the state Senate passed an amendment that included an explicit ban on in-state tuition for illegal immigrants.

Nationally, Congress is considering bipartisan legislation called the Dream Act, pending since 2001, that would create a path to legal residency for illegal immigrant students, though it remains unclear whether backers have enough votes to bring it up.

An estimated 11 million illegal immigrants live in the United States, according to the Pew Hispanic Center, with 130,000 to 200,000 in Massachusetts by last year.

Yesterday, Patrick called for greater compassion and understanding of immigrants.

He told the crowd that immigrants “walked through fire to make your way to this country’’ from countries such as China, Haiti, Ireland, Brazil, the Dominican Republic, and Pakistan. He pointed out that they are a widely diverse group that include PhDs, professional baseball players, cooks, and custodians, all attracted by the prospects of a better life.

And he acknowledged hurt feelings among them after the tenor of the state and national debate on immigration.