O’Malley tells Dublin he is there to listen 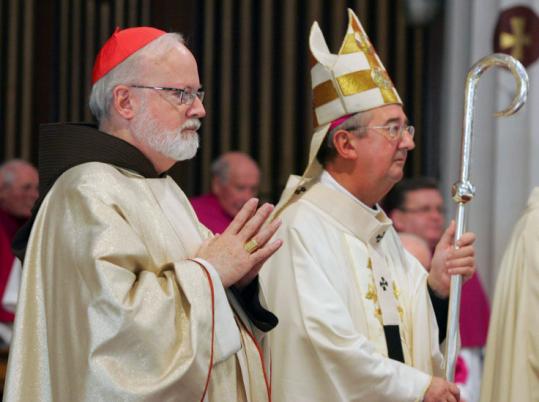 Cardinal Sean P. O’Malley told Catholics in Dublin yesterday morning that he could not offer a “quick fix’’ to the dire situation facing the Irish church as it struggles to address a massive crisis over clergy sexual abuse of minors.

O’Malley, in his first public appearance as part of a team of high-ranking prelates appointed by Pope Benedict XVI to scrutinize and advise the Irish church on its handling of the crisis, told people gathered at a Mass at St. Mary’s Pro-Cathedral yesterday that he had come to Dublin to hear what they had to say, according to a transcript of his remarks provided by the Archdiocese of Boston.

“I come to listen to your pain, your anger, but also your hopes and aspirations,’’ he said.

As “apostolic visitor’’ to the Archdiocese of Dublin, O’Malley will spend several days in Ireland’s capital meeting with victims, evaluating the effectiveness of new guidelines for protecting children from abuse, and talking with laity and members of the church hierarchy. He is planning a second trip for early next year.

He invited abuse victims to request meetings with him.

“We will attempt to communicate to them the apologies of a contrite Church and the pastoral solicitude of the Holy Father,’’ he said.

In March, the pope announced that the Vatican would conduct a review of the Irish church’s handling of the crisis. The country was reeling from two Irish government reports issued last year documenting myriad cases of clergy sexual abuse of children and the repeated coverup of abuse by church hierarchy in the Dublin Archdiocese and in church-run residential schools. Several Irish bishops have resigned, and a government compensation board has offered settlements to more than 13,000 victims totaling more than $1 billion, according to the Associated Press.

O’Malley is leading one of four reviews of Irish archdioceses. The Vatican has also appointed visitors to the country’s seminaries and religious orders.

Such investigations are highly unusual, and the Irish visitation is likely to draw a great deal of attention not only in Ireland but throughout the world.

“Sending investigators from outside the country, or even outside the diocese, to come in and check on what the bishop is doing is extraordinary — this simply doesn’t happen,’’ said the Rev. Thomas J. Reese, senior fellow at the Woodstock Theological Center at Georgetown University, in an interview yesterday. “Bishops are totally autonomous in their diocese and subject only to the pope.’’

O’Malley is seen as one of the most experienced leaders in dealing with the sexual abuse crisis, which exploded in Boston in 2002. Since then, archdioceses across the United States and throughout the world have faced similar problems.

He led the scandal-plagued dioceses of Fall River and Palm Beach before 2003, when he replaced Cardinal Bernard F. Law, who stepped aside over criticism of his failure to remove sexually abusive priests from ministry.

O’Malley arrived in Dublin on Saturday, accompanied by three advisers who have played key roles in addressing the sexual-abuse crisis in Boston: Barbara Thorp, director of the archdiocese’s Office for Pastoral Support and Child Protection; the Rev. John J. Connolly Jr., a special assistant to the cardinal; and Thomas H. Hannigan Jr., outside counsel to the archdiocese who has handled abuse-related litigation and negotiated settlements with hundreds of victims.

O’Malley will stay in Dublin for several days before heading to a Nov. 19 convocation of the world’s cardinals in Rome, where the sexual-abuse crisis will be among the topics addressed, and to a meeting the next day during which 24 new cardinals will be created.

The Vatican said the visitors would not grant interviews to the news media due to the “delicate nature of the subject matter and out of respect for persons involved,’’ but a comprehensive summary of their findings would be made public when their work is completed. The visitation is expected to conclude by Easter.

O’Malley, whose family immigrated to the United States from County Clare and County Mayo, is proud of his Irish roots, which provide a point of connection with Catholics in heavily Irish-American Boston and in Dublin.

At yesterday’s Mass, celebrating the Feast of St. Laurence O’Toole, principal patron of the Archdiocese of Dublin, he spoke of his mother’s family’s “arduous voyage’’ across the Atlantic in the period following the Irish famine. He said the family’s only surviving remnants of that journey were a two-volume “History of Ireland’’ by Abbé MacGeoghegan and a statue of the Sacred Heart of Jesus.

“What they did not leave behind was their Catholic faith, and their great love for Ireland,’’ O’Malley said. “I was raised with both.’’

He said much has been done in Dublin to address past crimes, assist victims of abuse, and create procedures to ensure the safety of children.

“The task of the visitation is to bring new eyes to the situation, to verify the effectiveness of the present processes used in responding to cases of abuse,’’ he said. “We are not here to reduplicate investigations or studies of the past.’’

What impact the Irish visitation will have is difficult to anticipate because so many variables are involved, Reese said.

“At each point in the process, you are dealing with human beings,’’ he said. “How good an investigator is the person? How transparent and forthcoming will the people he talks to in interviews be? How good will his report be? And, finally, how seriously will the report be taken by the people in Rome?’’

O’Malley’s critics have argued his time would be better spent at home, where advocates for victims of clergy abuse are anxiously waiting for the archdiocese to produce a comprehensive list of all Boston-area priests involved in the sexual abuse of minors.

And Terence McKiernan, of the Massachusetts-based BishopAccountability.org, which monitors clergy sexual-abuse cases nationwide, expressed skepticism about the value of visitations, which McKiernan said often seem more focused on spirituality and public relations than substantial reform.

“It’s not clear to me that bishops and cardinals sitting down [to talk] is really anything but an exercise in pastoral damage control,’’ he said.