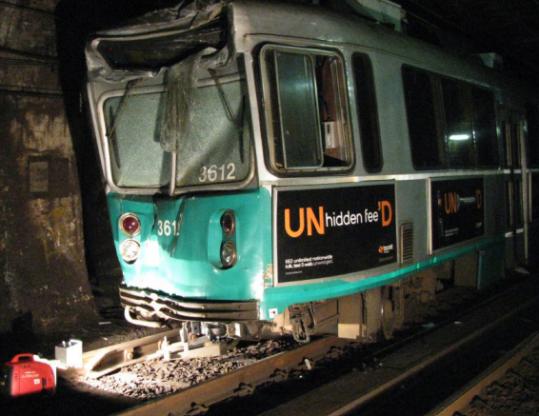 Cindy A. Gillespie, a Green Line operator with a dozen years of experience, was four hours into a shift on a Friday in May when she stopped her trolley for a red light in the tunnel west of Government Center. A late-arriving crowd had caused congestion, and Gillespie could see other trolleys stopped up ahead. She announced the delay to passengers, waited to proceed, and — crash. Another trolley crashed into them from behind.

“My whole body jerked,’’ Gillespie told federal investigators, according to documents released yesterday. “I was, like, thunderstruck.’’

Gillespie’s glasses crashed to the floor; her handbag flew off the dashboard. With her radio going crazy, she said, she limped through the trolley to check on the shaken passengers. In the car coupled to hers, there was chaos.

“People were yelling and screaming,’’ said Jimmy Zhu, the trailer operator of the car that was coupled to Gillespie’s and that took the hit directly. Although his power went out, he knew that many passengers were bruised and bleeding. “People were in a panic state,’’ he said.

The interview transcripts were among hundreds of pages released yesterday by the National Transportation Safety Board, providing detail about what happened on May 8, 2009, when MBTA operator Aiden Quinn crashed his trolley into Gillespie and Zhu’s while he was allegedly texting. The accident sent 49 people to the hospital and destroyed three Green Line cars worth an estimated $9.6 million.

The NTSB, an independent federal agency, began its own investigation almost immediately, as it does in any rail accident considered nationally significant.

Although its conclusions are still at least several months away, according to spokesman Ted Lopatkiewicz, the board published on its website yesterday a trove of fact-finding documents, including photos of damaged trolleys, tunnel inspection records, notes on sight lines within the tunnel, and toxicology tests of the operators involved, all of which came back negative.

Quinn, now awaiting trial in Suffolk Superior Court on charges of negligence, reportedly told MBTA Transit Police investigators from his hospital bed that he had failed to heed signals because he was composing a text to his girlfriend while accelerating from Government Center toward Park Street.

Quinn, 26, is scheduled to appear in court next Friday for a hearing at which he may decide to change his not-guilty plea. He originally faced a charge of gross negligence while controlling a “railroad train,’’ under a seldom-used 19th century statute providing a fine of up to $5,000 or a state prison sentence of up to three years.

In July, Quinn’s lawyers successfully argued that the felony charge should not apply because the Green Line is not a train but a trolley, so prosecutors went before a grand jury to lodge a new charge: gross negligence by a common carrier.

If found guilty, Quinn could face an equal fine or a sentence of up to 2 1/2 years in county jail, according to Jake Wark, spokesman for the Suffolk district attorney.

Quinn and his lawyers are determining whether he should change his plea or face trial, defense attorney James L. Sultan said yesterday. At Sultan’s advice, Quinn declined to be interviewed by the NTSB, but released documents confirm that he told MBTA police he missed signals while typing on his cellphone.

Quinn is also named as a defendant in multiple civil lawsuits filed after the accident.

In the week after the crash, the MBTA discharged Quinn and implemented the nation’s strictest cellphone policy, banning operators from possessing phones or related devices while on the job. Use of a cellphone by an operator triggers a 30-day suspension and a recommendation of termination; possession of a cellphone results in a 10-day suspension for a first violation and firing after a second violation.

Since the policy was put into place, 12 employees have been fired and 10 have received 10-day suspensions, MBTA spokesman Joe Pesaturo said.

Richard A. Davey, the MBTA’s general manager, said the accident and investigation underscore the importance of eradicating cellphone use by T operators and developing an automated crash prevention system known as “positive train control’’ for the Green Line.

Positive train control, , a general term for systems that can sound alerts and stop moving trains to prevent crashes, exists in some form on the Red, Orange, and Blue lines, all heavy-rail subways. But it is still several years away on the Green Line, the nation’s oldest and most heavily used light-rail trolley system, though the T is moving to implement it, Davey said.

In June, the T’s board of directors approved a $2.2 million contract for a firm to spend 20 months studying the Green Line’s infrastructure and its train operations to evaluate options for positive train control. Actual design and installation could take years and cost hundreds of millions of dollars. Among other catches, systems that are in place elsewhere might prohibit Green Line trolleys from running as frequently as they do now.

“The T has done a lot in the last 18 months to substantially improve the safety of the Green Line, and it’s something that we’re continuing to be vigilant about,’’ Davey said yesterday