Brazilian wed in US may still be deported 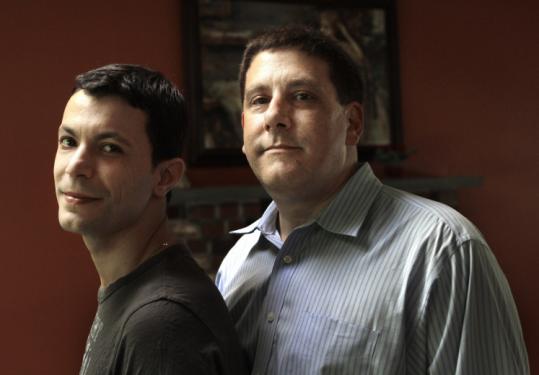 Genesio Oliveira (left) fears he will be deported and separated from Tim Coco of Haverhill, whom he married in 2005. (Steven Senne/ Associated Press/ File 2010)
By Russell Contreras Associated Press / November 9, 2010

A Brazilian man who was recently reunited with his Massachusetts husband when federal officials temporarily allowed him into the United States said he could face deportation because the attorney general will not reverse the immigration ruling that first separated the couple.

Genesio Oliveira, 31, said yesterday that he could be forced to return to Brazil in six months because of Eric Holder’s decision.

“I was very depressed,’’ said Oliveira. “I’m terrified. I thought this would be over by now.’’

Three years ago, Oliveira and husband Tim Coco, 49, of Haverhill, were forced to live apart when Oliveira was denied asylum over claims he was raped as a teenager. A judge found Oliveira’s fear of returning to Brazil genuine, but ruled he was not harmed physically by the rape.

The Associated Press does not typically name rape victims, but Oliveira speaks openly about his case.

The case gained international attention as gay rights and immigrant advocates criticized US officials for separating a legally married couple.

In June, at US Senator John Kerry’s urging, federal officials temporarily allowed Oliveira back in the country on humanitarian grounds.

Oliveira said the couple believed Holder would reverse the initial immigration decision. Oliveira, whose nickname is Junior, said that would have allowed him to apply for permanent residency, either on the basis of his marriage or as an asylum-seeker who feels threatened by anti-gay violence in his country.

Although Brazil is one of Latin America’s most tolerant countries toward gays, a number of Brazilian gays have persuaded US judges to grant them asylum on the grounds they would face persecution if sent home.

The US attorney general’s office did not immediately return e-mails and phone messages yesterday.

Humanitarian parole is used sparingly for a compelling emergency, according to the Department of Homeland Security.

A spokeswoman for Kerry said the senator was in Beirut and could not immediately comment.

The couple is looking at all options, including trying to reapply for asylum, suing the federal government, or trying to persuade Congress to pass a bill that would allow Oliveira to stay, Coco said.

“But each one of those options come with risks,’’ he said. “Junior could be forced to go back.’’