A sharp-eyed link to baseball’s past

At 93, former Chicago Cub Lennie Merullo has plenty of stories, and fun, to share 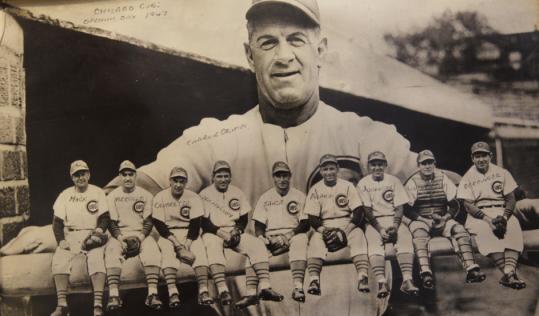 READING — As hard it may be to believe — especially to their fans — the have not been to the World Series since 1945. There’s an easy explanation for that, though.

“They miss me,’’ Lennie Merullo said. “My gosh, they miss me.’’ While he kept a straight face, the twinkle in his eye belied the intent in his voice.

Dapperly dressed in a Cubs-blue button-down shirt, a pocket watch tucked into its breast pocket with a baseball charm attached to the chain, Merullo sat in the kitchen of his big Victorian home in Reading, talking baseball. Now 93, he was a shortstop on that ’45 Cubs team, which, though heavily favored, lost to the in seven games.

A native of East Boston, Merullo was especially looking forward to the 2003 Series, when it appeared his boyhood team — the — and the team where he spent his seven-season career (1941-47) were destined to meet. But the baseball gods intervened, knocking both teams out in the cruelest of ways. Even without the Cubs or the Red Sox in the mix this year, Merullo watched the playoffs, including the beating Texas in the World Series on Monday.

One of 12 children, nine boys and three girls, Merullo got his start in baseball on Byron Street in East Boston.

“They named that movie after me. ‘The Natural,’ ’’ he said, the twinkle returning to his eyes. “No, every kid wanted to be a ballplayer, and Byron Street, there was always enough kids to have a game.’’

Byron Street was also where he met his future wife, Mary Jean. She lived across the street, and a friend called the couple “window lovers.’’

“I’d be looking out my window to see if I could see her,’’ Merullo said. “And if she saw me, she’d look out her window. On foggy days, we’d draw S’s in the window for ‘Sweethearts.’ I’m soft-hearted.’’

They will celebrate their 70th wedding anniversary in February.

Merullo credits a good portion of his baseball success to Ralph Wheeler, the scholastic sports editor at the Boston Herald at the time, who helped Merullo get into St. John’s Prep and then Villanova University, and also introduced the young ballplayer to the man who would eventually be his big league manager, Charlie Grimm.

It was during one of those meetings at Boston’s Braves Field in 1935 that he also made the acquaintance of a baseball legend.

“I walked in the Gaffney Street entrance to the visiting clubhouse and the home team clubhouse, and I hear all this laughter and raising hell in the visiting clubhouse,’’ where the Cubs were set up, Merullo said. “And I wish I had never seen this. He was naked as a jaybird with just a towel around his bottom. It was Babe Ruth, 1935.

“I’ll never, ever forget it. He was over there raising hell with all the players. I wish I hadn’t seen it. At the end of his career, sitting on a little stool, he looked like a sumo warrior.’’

This time, the twinkle was replaced by a hearty laugh.

The Babe was 40 that year, and would play just 28 games for the Boston Braves in his final big league season. Later, Merullo would acquire a relic from Ruth’s historic career: a beautiful piece of hickory lumber that Ruth had used to hit the 25th of his record-setting 60 home runs in 1927 with the .

Merullo’s house is filled with family pictures and mementos of his playing days and his 50-plus-year career as a scout, including pictures with former teammates, the 1990 Scout of the Year award, and plaques commemorating his 2008 induction into the Professional Baseball Scouts Hall of Fame.

The memories of his playing days, almost seven decades ago, are as sharp as ever. He remembers playing against Jackie Robinson. Ewell Blackwell, the Cincinnati Reds’ righty known as “The Whip,’’ was the pitcher he most hated to face. Don Johnson was his best friend on the Cubs.

His memories of the 1945 World Series are just as sharp.

“The thing I think about most,’’ he said, “is that they wanted us to have seclusion away from the fanatic fans. So they leased a houseboat on Lake Michigan and that’s where we stayed. The [wives] were very disappointed because they went out and bought special clothes, and then they had to stay on a boat’’ instead of downtown.

But more than any one series or game, Merullo said, his favorite memory of those days is just being on the field.

“My job was to get everybody relaxed on the ball club. And being the shortstop I was supposed to be the pepperpot, keep everybody alive, ‘C’mon, let’s go! How many outs? Two outs!’ But I just enjoyed being there. That’s what I remember most.

“If you can imagine, back in those days, a boy born and raised in East Boston, signing with the Cubs. And where did they have spring training? Catalina Island, in California. It was a dream come true.’’

The old shortstop said he hasn’t been back to Wrigley Field since 1980.

“If the Cubs would invite me, I’d love to go back,’’ he said. “Just to walk around the old neighborhood.’’

When his playing days were done, Merullo scouted for the Cubs from 1950 to 1972, then for 30 years for the Major League Scouting Bureau, retiring in 2003.

“I can tell by watching a fellow walk or go out to his position for the first time if he was going to be a ballplayer,’’ he said. “Just by his actions.’’

Baseball became the family business, of sorts. The oldest of his four sons, Len Jr., played in the minors, his career cut short by injury. Grandson Matt played parts of six seasons with the White Sox, Indians, and Twins, and is now a scout. Great-grandson Nick is a freshman catcher at James Madison University.

It was Len Jr. who bore the nickname of Lennie’s toughest day in the field. On Sept. 13, 1942, in the second game of a doubleheader at Braves Field, Merullo made four errors in one inning. He also committed an error in the first game, for a total of five that day. Easy to understand: His first child had been born that morning.

After traveling by train from New York, where the Cubs had played the Giants, Merullo had gotten little sleep before the birth of his son.

“I went out and had a great day,’’ Merullo said. “If they hit me another ball, I would have booted that one, too. Four errors in one inning.’’

From there on, the oldest son would forever be known as “Boots.’’

After a lifetime spent in baseball, Merullo’s stories are legendary.

“The best story he tells is when he talks about his mother speaking in Italian and always asking, ‘When are you going to get a job?’ ’’ said grandson Matt. During the winter of his senior year at Villanova, the story goes, the Cubs brought him to Chicago to sign a contract. Phil Wrigley, the team’s owner, wrote him a check for $1,500, money to take home for Christmas.

“They dressed him from head to toe in shoes, a topcoat, and a suit and hat,’’ Matt said. “He gets off the train in Boston, arrives around dinnertime when he knows everyone’s at the table, and he’s knocking on the door like some tax collector. He walks in, puts his fancy shoes up on the table. His parents are wondering what the heck is going on, and he slides this check across the table to his mother and father, and his older brother has to explain to them what it is: It’s $1,500.

“And his mother stands up and says in Italian, ‘OK, everybody go play baseball now.’ ’’