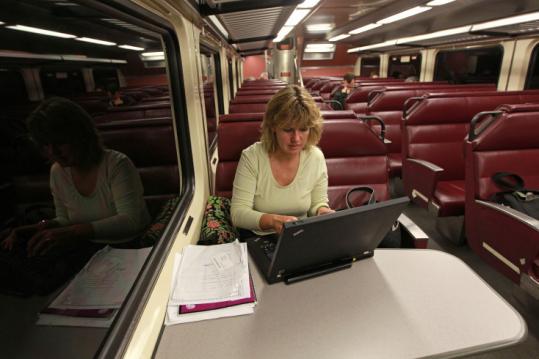 Norwell resident Ann Dwyer, riding on the Greenbush line last week, said though she had opposed the project, she became a convert in 2008 after taking a job with a company in Boston. (Barry Chin/ Globe Staff)
By Eric Moskowitz Globe Staff / October 31, 2010

SCITUATE — Three years after the Greenbush train made its inaugural run, ridership on the $534 million commuter rail extension is far below the MBTA’s projections, and those who do take it are more likely to be former passengers of the T’s own commuter boats than motorists lured away from the South Shore’s congested highways.

Last week, according to the T, an average of 2,133 weekday customers rode the line toward Boston, about half the 4,200 riders the transit agency had expected within three to five years of opening Greenbush. Even more sobering for the T is the fact that ridership in each month from October 2009 to June 2010 — the most recent month for which complete statistics are available — had dropped below the levels in the same month a year earlier.

MBTA officials and project supporters who once said Greenbush should not be judged until 2010 now maintain that rail lines can take decades to reach their potential. They celebrate the train’s ability to meet its schedule, with Greenbush continually rating at or near the top of the T’s 14 commuter rail lines and branches for on-time performance. They attribute the recent drop in ridership to the recession, which wiped out thousands of jobs in downtown Boston, and they say the line is an essential amenity for what had been the last suburban region without passenger rail to the city.

“I think we’ve got some room to grow, certainly. But I would call it, three years in, a success,’’ said Richard A. Davey, general manager of the Massachusetts Bay Transportation Authority. “We can’t snap our fingers and get 8,000 people on the Greenbush on the first day. It’s all about growing that ridership, showing it’s a reliable service, showing to our customers and potential customers that it’s a ride worth taking, as opposed to the traffic and congestion . . . on routes like 3 and 3A.’’

But opponents of the fiercely contested Greenbush extension, a project delayed for years and made more expensive amid protest and prolonged legal battles, say the ridership numbers validate their warnings that the rail line would not be sufficiently embraced by South Shore residents to put a dent in highway congestion, defray operating costs, or justify the half-billion dollar expense of design and construction, all of which was borne by state taxpayers and T riders without federal reimbursement.

“This has done nothing from an environmental standpoint,’’ said state Senator Robert L. Hedlund, a Hingham Republican first elected in 1990 in part over his opposition to the project. “It has simply drawn sorely needed capital funds away from other projects that made better environmental sense, never mind transportation-planning sense.’’

Hedlund is now calling for the Legislature to convene a hearing to examine Greenbush’s progress and consider the lessons it holds for South Coast Rail, the Patrick administration’s proposed $1.4 billion to $2 billion commuter rail extension to Fall River and New Bedford via Taunton.

“It is critical that we, as legislators and stewards of the public’s money, determine whether these type of expensive, low-return mass transit projects are appropriate,’’ Hedlund wrote Thursday in a letter to the Senate chairman of the Joint Committee on Transportation.

One-way fares on the Greenbush line cost $4.75 to $6.75, with monthly passes ranging from $151 to $223, depending on which of the seven stations passengers board from. Parking runs $4 a day. Those who do take Greenbush commend its convenience and ease and wonder why there are so many empty seats.

“I think it’s a no-brainer,’’ Walter Bastis, a corporate comptroller from Hingham, said of the line’s benefits to the region. Bastis rode a 5:45 p.m. outbound train Wednesday. The five-car train was full by Greenbush standards, meaning most of the three-seat benches held two riders at the outset, and the two-seaters held one. As the train arced along the coast, following an hourlong course through Boston, Quincy, and Braintree to Weymouth, Hingham, Cohasset, and Scituate, one rider after another extolled the benefits of Greenbush, as those around them dozed in noise-canceling headphones, did crossword puzzles, or tapped messages on cellphones.

Several said they were former MBTA commuter boat riders, including Bastis, who still catches the ferry from Hingham two days a week “out of loyalty.’’

Ann Dwyer, a Norwell resident who once opposed the train, said she became a convert in 2008, soon after taking a job with an e-commerce company in Boston.

“It’s actually been very convenient, and it’s a pretty smooth ride,’’ said Dwyer, who was working on her laptop on the lower level of a double-decker coach. And the camaraderie among regular riders and conductors has been an unexpected bonus, she said.

Across from Dwyer, John Croll looked up from his novel and said he would not have moved to Scituate without the train. He was drawn to the town when relocating from Texas for work a year ago. “There’s no way I would be in that traffic,’’ said Croll, account services director for a health-promotion company.

Like much of the MBTA’s commuter rail, Greenbush — named for its terminal station, in Scituate — is not a new railroad but a restored line first established in the mid-19th century to carry both passengers and freight. It was part of the extensive Old Colony Railroad in Southeastern Massachusetts that was later operated by the New York, New Haven, and Hartford Railroad. Ridership waned with the rise of the automobile, and passenger service was discontinued in 1959, after the state cut off its subsidy for the rail while finishing construction on the Southeast Expressway.

In the early 1980s, some lawmakers from the region began seeking rail restoration to relieve overburdened highways and accommodate growth. In March 1985, Governor Michael Dukakis called the abandonment of South Shore rail service “the dumbest thing’’ the state had ever done, and declared his support for restoring three branches of the Old Colony — a 10-mile main line from South Station to Braintree that would split off for Middleborough/Lakeville, Plymouth/Kingston, and Scituate.

In 1990, the three Old Colony branches were included on a roster of bus, subway, and commuter rail improvements that the state promised as environmental mitigation to receive federal approval for the Big Dig highway project.

But state officials overestimated the ease with which they could start running trains again on an overgrown railbed that had many new neighbors. From the start, the strongest opposition formed along the Scituate line, with an outspoken and active band of homeowners along the route worried about potential noise and vibration, traffic at grade crossings, and disruption to historic districts and environmentally sensitive areas. The other two branches received federal reimbursement, but the state stopped seeking federal funding for Greenbush as it became more complicated and costly with additional features such as an 800-foot tunnel to avoid disrupting Hingham Square.

The first two Old Colony branches opened in 1997, with the delayed Greenbush line following on Halloween 2007. The price tag for the three branches, projected to be $200 million in the mid-1980s, wound up being $1.1 billion, with half of the money going to Greenbush.

“To a large extent the delays at Greenbush were a self-fulfilling prophecy on the part of the opponents,’’ said Seth Kaplan, vice president for policy and climate advocacy at the Conservation Law Foundation. “It’s a little bit disingenuous to look back and say, ‘Well, gosh, it really wasn’t a good idea because it got slowed down [and made more expensive]’ when the people who are saying it are the people who slowed it down.’’

In the weeks after Greenbush opened, officials called it a long-term investment, but also said its success could be measured in a few years. “We’re really looking at 2010 to really have the ridership that we’re anticipating,’’ Jim Folk, the transit authority’s director of operations and planning, had said. “Come back to us in 2010,’’ spokesman Joe Pesaturo said.

The MBTA also predicted at the time that eight people would give up their cars to ride the new train for every one lured away from the T’s own commuter boat. But last year, a survey of Greenbush riders found that 46.6 percent had switched over from the boat — with no new benefit to the MBTA’s strained finances or to the environment — compared with 44.5 percent who previously drove to Boston.

Davey, who became MBTA general manager earlier this year, said the projections did not anticipate the $4-a-gallon gas prices that would drive up rail and transit ridership in 2008 or the recession that would drive it down the following year. T officials also say the roughly 1,000 people a day who have switched from driving is a substantial figure, and they note that Greenbush’s ridership decline has been less pronounced than the drop on more established commuter rail lines.

Business groups on the South Shore and in Boston advocated for Greenbush, to expand the pool of workers downtown and facilitate planned mixed-use development around rail stops. Today, Peter Forman, president and CEO of the South Shore Chamber of Commerce, calls Greenbush ridership “a little disappointing,’’ and the lost passengers for the commuter boat “discouraging.’’

“But I think it is too early to say that the project hasn’t met its objectives,’’ he said. “It’s still a positive addition to the South Shore, and the South Shore is in for a very robust period of growth over the next 10 or 20 years in part because of the transportation improvements.’’

Noah Bierman of the Globe staff contributed to this report. Eric Moskowitz can be reached at emoskowitz@globe.com.