Service marks what would have been his 21st birthday 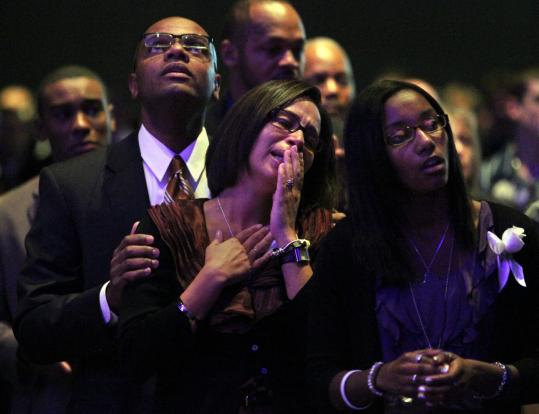 The Pace University football team stood in a semicircle, which a team does when it is time to gather for something important. But this time, it was not for a play or a pep talk, but to watch a slideshow. In silence. In disbelief.

On a screen inside a lobby at the Boston Convention & Exhibition Center, photos of a former teammate, Danroy Henry Jr., slid by.

Henry as a toddler, wearing Mickey Mouse ears at World.

Henry as a child, brushing his younger brother’s hair.

Henry as a boy, blowing out birthday candles.

The last one wet more than a few eyes. Yesterday would have been Henry’s 21st birthday, and he had been making plans to celebrate the milestone. Instead, the team was waiting for the start of Henry’s memorial service.

An Easton native and defensive back for the Pace team, Henry was shot to death by police early on the morning of Oct. 17, outside a bar in Mount Pleasant, N.Y. Police have said they opened fire after Henry struck a police officer with his vehicle. Witnesses, however, have said Henry was told by police to move his vehicle, and the officer was struck after jumping in front of the car in an overreaction to a fight in the parking lot. Henry was not involved in the fight.

“He told me he wanted to come down to Atlanta for his birthday,’’ said Brendon Waters, a childhood friend from Easton, as he stood to the side of the massive crowd waiting to enter the service, a button featuring Henry’s face and 12, his jersey number, on his lapel.

“Instead,’’ he said, then paused. “Instead, they took him for no reason.’’

Waters gestured at the sea of people and said that was all anyone needed to know about Henry. “When have you ever seen a funeral in a convention center?’’ he asked.

According to Convention Center officials, it was a first. They had expected a large turnout and set out 1,500 seats. Then the ceremony was delayed more than 20 minutes while they brought out 500 more chairs.

“Look, look, just look how many people are here,’’ said Nicholas Barrows, a former teammate from Oliver Ames High School. “Now look at those pictures of him with his family and know he’s not going to be there anymore. People need to be outraged. They need to feel anger. He was shot down in cold blood, laying down on the floor like roadkill.’’

Inside, during the service, which lasted nearly three hours, the circumstances of Henry’s death were not mentioned, and outrage was put aside in favor of celebration. An uncle sang a song he wrote for the occasion. Football coaches at Pace and at Oliver Ames spoke of a young man with a contagious spirit and a quiet intensity. Friends talked of his pride in Boston, not a popular position on the New York campus, and joked that he was the world’s slowest eater.

Another uncle talked about how Henry’s tattoos told his story: On his back he wore the wings of an angel; on his wrists, “family first.’’ His most recent tattoo, a testament to his faith, read: “I would rather be a prince in your kingdom than a king in this lifetime.’’

Near the end of the ceremony, Henry’s family took the podium. His younger sister, Amber, read an essay she had written about her brother two years ago, in eighth grade, when her assignment was to write about her hero. His younger brother, Kyle, exposed his wrists to show off his new tattoos: “Family first.’’ It’s what Danroy had told him he wanted for his birthday.

His mother, Angella, thanked the crowd for their support and said she and her husband will continue to speak of their son in the first person “because he’s here, with us.’’

Danroy Henry Sr. was the last to speak. He and his wife had driven to New York to see their son’s game, just a few hours before the shooting, and said that as they prepared to take him to dinner that evening, he had made a discovery: His son had a special ringtone for him, one that signaled it was dad calling. It was the chorus to a song, whose lyrics were “like father, like son.’’