Effort to curb Lyme disease puts deer in the crosshairs

Towns may relax rules to cull the population 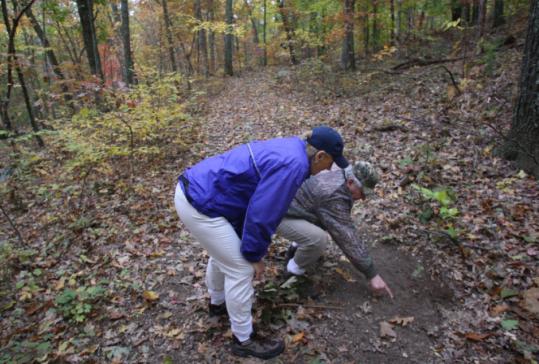 In a popularity contest, the graceful deer would trounce the lowly, parasitic tick.

With tick-borne Lyme disease posing an increasing health threat in Boston’s wooded suburbs, communities are training their sights on the profusion of deer that host the bloodsucking parasites. A number of towns — from Andover to Martha’s Vineyard — are discussing whether to introduce or expand deer hunting in hopes of curbing Lyme disease, which has exploded in Eastern Massachusetts over the past decade.

In Dover, where the deer population is almost three times the levels recommended by state wildlife officials and cases of Lyme disease have increased sharply, officials last week lifted restrictions on bow hunting on some public land to begin the town’s first “deer culling.’’

The hunt is strictly regulated, and will probably harvest only about 50 deer. But in a region with limited affection for deer hunting, and doubts about its safety in well-traveled woods, it shows that personal health concerns are gaining the upper hand.

“Five years ago, we couldn’t have done this,’’ said Barbara Roth-Schechter, head of the town’s health board. “People would have shot it down. But there’s been an exponential increase in Lyme disease, and people are fed up.’’

Dover has expansive forests that have become overrun with deer, roughly 25 per square mile, and a surging rate of Lyme disease, a bacterial infection transmitted by tick bites.

“We look at it as a health threat,’’ Roth-Schechter said.

At 61 cases per 100,000 people statewide, Massachusetts has the fourth-highest rate of Lyme disease in the country, behind Delaware, Connecticut, and New Hampshire. Reported cases of Lyme disease have risen from around 1,100 in 2000 to more than 4,000 last year, according to the Centers for Disease Control and Prevention.

The town’s hunting plan, which began last week after two years of discussion, shows the growing sense of urgency around Lyme disease, and is being closely watched by specialists who say measures to curb runaway deer populations are well overdue.

“This really needs to be done in every community that has substantial amounts of forested land within the 495 belt,’’ said Sam R. Telford III, an authority on Lyme disease, at Tufts University. “If they don’t have a problem now, they surely will five to 10 years from now.’’

In Middlesex, Norfolk, and Worcester counties, the number of patients diagnosed with Lyme disease more than quadrupled between 2000 and 2009, according to state public health officials, bringing an ailment once largely confined to Cape Cod and the islands to broad sections of Greater Boston. In Middlesex County, cases rose from 136 to 637. In Norfolk, they climbed from 79 to 466.

Telford said research indicates that ticks rely on deer as hosts to reproduce, and that tick and deer densities are linked. With fewer deer to latch on to, the tick population will become smaller and more confined, specialists say.

Deer populations have expanded the most in the forested suburbs inside Interstate 495 west of Boston, where hunting has tended to be heavily restricted and often prohibited on public land. Between 1995 and 2005, the number of deer in that belt rose from 10 per square mile of forest to about 30, state wildlife officials estimate. Densities are lower in the southeastern part of the state where hunting is more prevalent.

Deer populations have since fallen slightly to about 25 per square mile of forest as the state has granted more permits in those areas.

In Medfield, officials will watch the hunt in neighboring Dover with an eye toward addressing their own problem. The town now severely restricts hunting, but amid growing public support may expand it next year.

“The problem in the past has been ‘Who wants to kill Bambi?’ ’’ said Michael J. Sullivan, the town administrator. “But now there’s a growing push to do something. Right now, they’re everywhere.’’

Similarly in Andover, where cases of Lyme disease have increased, town leaders are considering allowing archery deer hunting this season, which ends Nov. 30. And in Martha’s Vineyard, officials are studying whether to expand it.

Sonja Christensen, deer and moose project leader for the state’s wildlife division, said growing deer herds, and the disruptions they cause, have prompted towns to consider opening land to hunters. Suburban sprawl has gobbled up hunting tracts, she said, allowing deer to thrive and multiply.

“Access is a huge issue in Eastern Massachusetts,’’ she said. “When ever a house goes up, deer get more protection.’’

Because of a state law that restricts hunting within certain distances of roads and homes, a new home effectively eliminates hunting in the surrounding 18 acres, officials said, and many communities in the Boston area ban hunting entirely on town-owned land. Private property owners often allow hunting on their land.

With plentiful brush and vegetation in woods and suburban properties, and no predators other than the occasional coyote, deer can abound.

Joe Grady, conservation administrator for Duxbury, said the town opened up about 900 acres to bow hunting several years ago. That has helped, but the deer population remains high.

“We probably need to open up more land,’’ Grady said.

Jim Palmer, a hunter who helped organize the culling effort, said residents are eager to see the herds thinned.

Palmer said hunters are already using private land for shotgun hunting. State officials say there have been no recorded accidents between hunters and non-hunters.

In Dover and some other towns considering hunting expansions, officials have elected to allow bow hunting to ease concerns that guns would be too dangerous in well-traveled woods. But some object to bow hunting on moral grounds, and said it will have little impact on the population.

On Nantucket, opponents of expanded deer hunting have been vocal, even though some 2,500 deer roam the island. Hunters have kept their numbers in check by killing about 500 each year, but officials hope to increase that in coming seasons.

“Some people don’t want more of it,’’ said Malcolm MacNab, chairman of the Nantucket Tick-Borne Disease Committee. “And they are passionate.’’

But in many towns, the growing risk of Lyme disease is trumping antihunting sentiment.

“There’s probably nothing worse than a deer running in front of your car,’’ said Faith Shapiro, who works for the Conservation Commission in Sudbury, which has allowed arrow hunting to control deer stocks. “Except Lyme disease.’’