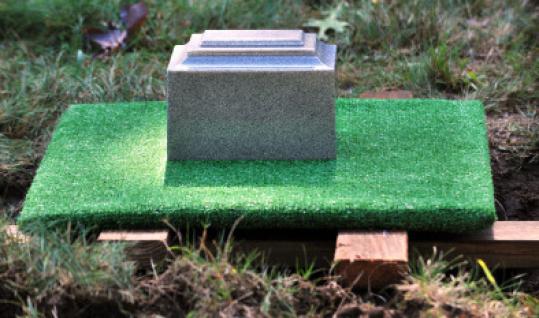 Foxborough residents gathered to reinter the remains of an unidentified patient at the former Foxborough State Hospital. (Josh Reynolds for the Boston Globe)
By Michele Morgan Bolton Globe Correspondent / October 14, 2010

FOXBOROUGH — The Saturday gathering was small, intimate, and fitting for a close friend.

But, in fact, the dozens who stood around the small grave on Cross Street earlier this month in the crisp fall chill had no idea whom they were burying as they prayed over a small, gray urn as it was committed to the ground.

The remains were exhumed in September from a far corner of the old Foxborough State Hospital grounds after lying undetected in the woods for a century. The deceased was segregated after death and buried alone, as the story goes, because of some communicable disease.

For generations, hospital employees passed down the story, but no one knew where the body was. Then town historian Jack Authelet worked on a hunch that an unusual cluster of stones between an old building and the original Mansfield and Framingham Railroad tracks, could be the place. And he and his wife, Margery, trekked through the overgrowth until they found it.

The hospital, originally for “dipsomaniacs,’’ or alcoholics, later became a psychiatric facility. It has been closed for 35 years, the property since sold and divided into commercial development, housing, and recreation land for the town.

After months of persuading the state to allow an exhumation, without any records or even a death certificate to fall back on, officials finally relented and the remains were unearthed.

The Oct. 2 memorial service returned the deceased to the care of the state in death, as he or she was in life. Authelet said he is gratified for the chance to do the right thing for the unknown person, whose grave will be marked by a number, like the scores of others around it.

But although the “where’’ of the mystery was resolved, the “who’’ remains an open question that is not likely to be answered.

Even so, the person has always been known to God, said the Rev. Steve Madden of St. Mary’s Church in Foxborough.

“And we commit our friend to Almighty God as we commit this body to the ground,’’ Madden said during the brief ceremony.

Many patients who spent their lives in the state hospital were buried in Foxborough. The Cross Street graveyard, just off North Street, is a spillover from another area designated in Rock Hill Cemetery. Bodies are buried in nameless lines, the numbers presumably corresponding to identifying paperwork that no longer exists.

Foxborough State Hospital opened in 1889 and treated thousands of patients until it ceased operation in 1976, according to historical accounts. More than 1,100 patients are buried in its two cemeteries.

Over time, the series of foreboding buildings with peaks and spires — that seem straight off the page of a fairy tale — were used for storage and, at least at one point, for a community haunted house at Halloween.

Once the facility closed, many remaining patients were moved to the neighboring Plainville State Hospital, also since closed. Others were released into community-based residential programs, and still others were discharged into the community, Authelet said.

The effort to reclaim the long-lost citizen speaks volumes about a community “willing to bring one of God’s children full circle,’’ he said.

“We can but wonder if there was family to mourn the death of this individual, of their inability to claim the body for private burial, [or] the need to let their loved one remain in state care, even in death,’’ Authelet said in graveside remarks.

Families of patients, particularly during the Great Depression, often didn’t have the means to bring a loved one home, he said. “We can but wonder if it was a matter of choice or necessity, or a lack of other options.’’

Foxborough and its historical commission and public officials, in this case, stepped in to bridge that gap, no matter the passage of time, officials said.

Lynda Walsh, who chairs the town’s Board of Selectmen, said the burial that resulted after such a lengthy search and recovery process is an example of why she loves her town.

“The past, and our responsibility to it, can never be forgotten,’’ she said. “We take care of our own.’’

The memorial service was attended by some town officials and a smattering of residents. Among the speakers was Lester Blumberg, who is general counsel for the state Department of Mental Health.

He talked about the effort today to help people with mental illness and other challenges overcome those barriers to live and work productively.

“But that was not always the case,’’ he said, describing the era when the global solution to mental illness was to institutionalize the people who had it.

“These individuals lived and died in obscurity,’’ he said. “Their memories were lost forever.’’

Blumberg praised Authelet and the town for caring enough to rescue a person from obscurity and offer the dignity in death that is deserved by everyone.