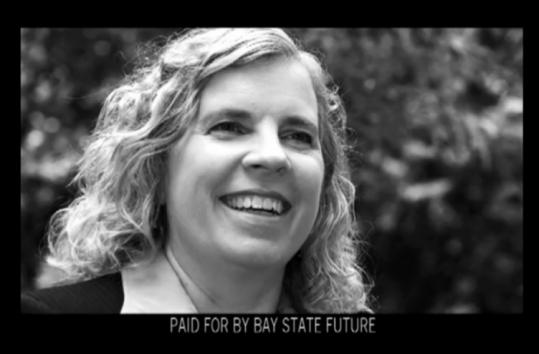 Barbara Weniger owns the Lakota Bakery in Arlington and, in recent years, has been a contributor to the Democratic Party.
By Brian C. Mooney Globe Staff / October 10, 2010

At the end of each television advertisement attacking Charles D. Baker, the Republican candidate for governor, a picture of Barbara Weniger appears on screen, accompanied by her voice-over, saying she chairs an organization called Bay State Future, which paid for the ad.

Weniger owns the popular Lakota Bakery in Arlington and, in recent years, has been a contributor to the Democratic Party and some of its candidates, including Governor Deval Patrick.

But this is not some grass-roots advocacy group.

The more than $2 million worth of negative ads, aired by Bay State Future to help Patrick win reelection, were bankrolled by the Democratic Governors Association, with help from the Massachusetts Teachers Association and Local 1199 of the Service Employees International Union.

Bay State Future is one of many nonprofit political advocacy organizations on both sides of the political spectrum that have been created under Section 527 of the federal tax code to influence governor’s races around the country, mostly through negative advertising that must be produced independent of the candidates they try to help.

The parties and other groups use 527s because there is no limit on contributions from individuals, corporations, and labor unions. They are but one of several vehicles that interest groups have created to influence races.

In Massachusetts, Republican and Democratic groups have poured money into the state to tilt the governor’s race, which polls show is neck-and-neck between Patrick and Baker.

The Republican Governors Association, for example, has spent about $2.5 million on negative ads, primarily against independent candidate Timothy P. Cahill and, to a lesser extent, Patrick. But unlike its Democratic counterparts, the Republican Association discloses its role at the end of its commercials.

“Our name is not on these ads because they aren’t our ads,’’ spokeswoman Emily Bittner said in an e-mail response to written questions from the Globe. “They’re run by other groups. The DGA likes to support local groups when possible, and these groups raise money from partners outside the DGA.’’

To fund its ads, the Democratic Governors Association often combines party money with gifts from labor unions. Bittner declined to reveal the breakdown of contributions to the Massachusetts 527 through the reporting period that ended Sept. 30. The amounts will be included in the group’s next report to the Internal Revenue Service on Oct. 15.

In reports to the state Office of Campaign and Political Finance, Bay State Future lists the Democratic Governors, the Massachusetts Teachers Association, and the SEIU local as sources of the funding, but not the amounts contributed by each organization. Weniger did not respond to several Globe calls.

States have varying campaign finance laws, with differing limits on direct expenditures, causing the national party committees to pour huge amounts of money into state contests in different ways, either with large amounts to the state party, directly to the candidate, or to a state PAC or 527. While both parties use front groups in some states, in many others they do not, openly disclosing their sponsorship, often through state-registered PACs bearing their names.

In some states, the party-driven vehicles are testing limits of state campaign finance laws.

In Vermont, the Democratic Governors Association has an entity similar to the one in the Bay State running ads critical of Lieutenant Governor Brian Dubie, the GOP’s gubernatorial nominee. However, the 527, called Green Mountain Future, has not filed any reports with the state, prompting the attorney general’s office to investigate.

“We’ve just begun investigating them,’’ Assistant Attorney General Mike McShane said last week. “The issue would be whether or not they need to file as a political action committee or to comply with the electioneering communications section of the law,’’ he said. The Democratic governors say the 527 is in compliance and will disclose funding and spending to the IRS Oct. 15.

In Minnesota, Common Cause filed a complaint contending that a state-based independent expenditure committee called Minnesota’s Future circumvented a state law by using a shell 527 with a similar name to funnel $428,000 from the Republican governors to underwrite an ad critical of Mark Dayton, the Democratic-Farmer-Labor Party candidate for governor. The 527 called the complaint a “smokescreen,’’ dubbing Common Cause a front group for Democrats.

In Massachusetts, Baker’s campaign has complained loudly about the latest Bay State Future ad, which says Baker “favors tax loopholes that encourage corporations to ship our jobs overseas.’’ The basis of the charge is that Baker signed a pledge from the group Americans for Tax Reform not to raise taxes. The loophole, however, is in the federal tax code, over which “the governor of Massachusetts has no control,’’ Baker’s campaign notes.

The Bay State Future model resembles one set up by the Democratic governors in Ohio, where the national committee had poured $1.75 million into a 527 called Building a Stronger Ohio as of the end of June. Three international unions had kicked in another $275,000 to underwrite ads attacking Republican gubernatorial candidate John Kasich.

In at least two other states, Nevada and Iowa, the Democratic governors bankrolled advertising by front groups in an attempt to influence the outcome of GOP primaries for governor, in both instances attacking the stronger candidate. Both efforts failed, however, and the Democratic candidates are trailing their GOP opponents by large margins in recent public polls in each state.

In Nevada, the Democratic governors gave $500,000 of the almost $1.2 million raised by a PAC called Committee to Protect Nevada Jobs. In Iowa, they was the sole funder of a $782,500 effort by “Iowans for Responsible Government’’ to hobble former governor Terry Branstad in the primary. Branstad won anyway.