Newburyport lobbies to be official birthplace of the Coast Guard 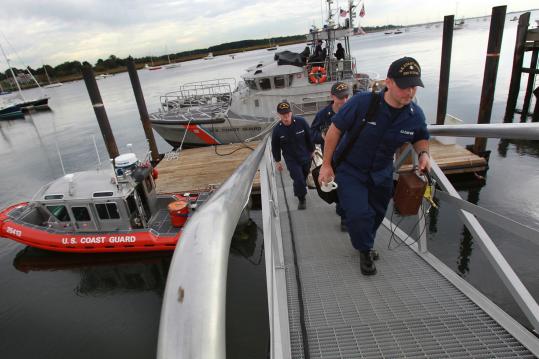 A Coast Guard crew arrives in Newburyport, where the first vessel to enter active service was built for the US Revenue Cutter Service in 1791. (Suzanne Kreiter/Globe Staff)
By Katheleen Conti Globe Staff / October 10, 2010

A presidential proclamation and joint resolutions by Congress and state legislators may not be enough for Newburyport to cement bragging rights to being the birthplace of the US Coast Guard.

For a plethora of history buffs, though, the pièce de résistance is that the vessel Massachusetts, built in Newburyport in 1791, was the first cutter to enter active service under the US Revenue Cutter Service, which later became the Coast Guard. This, many have argued, makes Newburyport the official birthplace of the Coast Guard, a distinction marked by a local sign and monument, not to mention a 1965 proclamation signed by President Lyndon B. Johnson.

But as far as the Coast Guard itself is concerned, the birthplace issue is debatable.

“How do you define that?’’ said Christopher Haven of the Coast Guard’s Historian’s Office in Washington, D.C. “Is it where Alexander Hamilton was when he created the System of Cutters, where the first cutter was formed, or when it first went into commission or oper ations? . . . [Newburyport’s] claim might be legitimate, but the Coast Guard has not officially declared that to be the case.’’

The Massachusetts was among seven cutters launched in 1791. According to the Coast Guard’s website, as many as three other cutters may have been launched prior to the Massachusetts.

For Newburyport officials, there is no doubt to the claim. Since taking office in January, Mayor Donna Holaday has focused on strengthening Newburyport’s ties with its maritime history, specifically with the Coast Guard, and its attraction for tourists. She is reaching out to officials in Salem, where Governor Deval Patrick recently signed legislation declaring it the birthplace of the National Guard, to model a campaign on that initiative.

“There is a chance that we could be competing with a few other communities who all started at the same time building ships, but I think it’s worth pursuing,’’ Holaday said. “I think that people just sort of thought this was a done deal.’’

Being recognized as first in anything or the birthplace of something not only carries added significance, but is often open to interpretation, said Peter Drummey, librarian at the Massachusetts Historical Society. Arguments could be made, for instance, that there are various birth dates for the Marine Corps, which existed during the period of the American Revolution, then was disbanded, only to be reestablished several years later, Drummey said.

Similarly, Beverly and Marblehead have claimed for years to be the birthplace of the American Navy based on a technicality: On orders from George Washington, the schooner Hannah set sail out of Beverly on Sept. 2, 1775, but its owner, crew, and registration were from Marblehead. A dispute, Drummey said, “adds the spice to it. It has the high school football rivalry feel — who’s first, who’s best.’’

“These are two towns, taking exactly the same evidence and interpreting it differently,’’ he said. “I think sometimes the importance of the historical events are being lost in this vying for historical rights. People think that this is important and should be celebrated, [but] sometimes the big picture is being missed in terms of what’s important and thinking of this as vying for a claim.’’

Ann Marie Casey, executive director of the Marblehead Chamber of Commerce, is quick to note that there is a distinction between the two communities’ claim to the Navy.

“Marblehead is the birthplace of the American Navy and Beverly is the naval home base of General Washington,’’ she said. “It’s an old-school rivalry that people joke around about.’’

“The ship was outfitted in Beverly and it sailed from Beverly. Most of the crew were from Marblehead and, as far as I know, there wasn’t a complete agreement on where the ship was built,’’ said Sue Goganian, director of the Beverly Historical Society and Museum. “We all have a piece of that history. . . . To me it’s not about the first, the earliest, the only. It’s about the story.’’

Beverly and Marblehead are not alone. Philadelphia, Providence, Machias, Maine, and Whitehall, N.Y., also claim to be the birthplace of the Navy. The Navy does not officially recognize any community as its birthplace.

Initiatives by communities to be recognized as the first in something have increased over the last 20 years, said Linda Jane Coleman, professor in the Marketing and Decision Sciences Department at Salem State University. Lately, the driving force behind these campaigns could very well be the sagging economy and the competition to get funds, she said.

“It’s another way to say, ‘Buy my product. Buy my brand,’ ’’ Coleman said. “It’s about having an identity as much as anything. . . . When we market a city or a town, we market it for people to visit, or live there, or bring their jobs there. With today’s economy and the limited dollar, it’s become more important for these towns and cities to differentiate themselves.’’

Although Newburyport considers the Coast Guard a pivotal part of its identity, the city is not a so-called Coast Guard City — a designation vested by Congress on 10 communities that made special efforts to acknowledge its work and create a “home away from home’’ for Coast Guardsmen and women and their families.

Newburyport, which houses a Coast Guard station, has begun the process of receiving this designation by launching the website newburyportcoastguardcity.com, said T. Bradley Duffin, chairman of the Newburyport Harbor Commission, the group spearheading the city’s efforts. The group hopes to file the application within the next two months, he said. After that, it will work toward having the city officially recognized by the Coast Guard as its birthplace.

“We’re cautiously optimistic. I know we’ll get good congressional support,’’ Duffin said. “The real significance from the city’s perspective is, one, it kind of quantifies our belief as the originators of the revenue cutters, and that the first, the Massachusetts, was built in Newburyport.

“The second piece is an appreciation for the work that the Coast Guard does in making Newburyport a destination for Coasties, retired Coasties, and Coasties that would get together for reunions,’’ he said. “There’s an economic and tourism benefit as well, but also pride.’’