Speaking quietly, admits to her role in gambling case 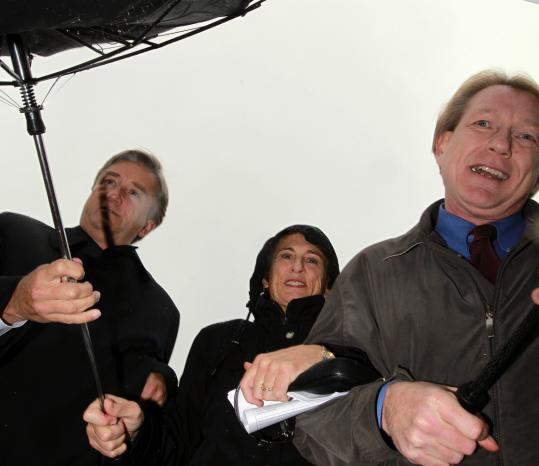 Patrice Tierney, who made the plea in US District Court in Boston yesterday, left the courthouse accompanied by lawyers. (Barry Chin/ Globe Staff)
By Stephanie Ebbert Globe Staff / October 7, 2010

The wife of US Representative John F. Tierney became a convicted felon yesterday, pleading guilty to four counts of aiding and abetting the filing of false tax returns for her brother, a federal fugitive who has been indicted on charges of illegal gambling and money laundering.

A grim-faced Patrice Tierney made the plea in US District Court in Boston yesterday, as the congressman, who faces a reelection challenge in less than four weeks, sat in the front of the courtroom, leaning forward, his head resting on hands held together as if in prayer.

“I take full responsibility for what my part in this was,’’ Patrice Tierney told US District Court Judge William G. Young. Asked by the judge whether she thinks she is guilty of the offenses the government described, she answered in a quiet voice, “I am.’’

US Attorney Carmen M. Ortiz alleged this week that Patrice Tierney helped her brother, Robert Eremian, manage a bank account that collected more than $7 million in illegal gambling profits over seven years. Over that time, prosecutors allege, Patrice Tierney paid bills for his three children and their ailing mother, balanced the account, and provided information to his tax preparer, resulting in false tax filings, prosecutors said.

The charges seemed sudden and potentially damaging to Tierney, a Democrat who has served seven terms and who was not expected to face a serious threat from his Republican challenger, newcomer Bill Hudak.

Law enforcement officials had been following Patrice Tierney’s brother for years and said he ran a large-scale illegal gambling business in the United States from the early 1980s through the beginning of 2010. State Police raided his Lynnfield office in 1996, leading Eremian to move the business’s headquarters to Antigua, but the business continued underground in Massachusetts, said Assistant US attorney Fred M. Wyshak Jr.

Eremian was convicted in 2002 of tax evasion and money laundering, but persuaded law enforcement and probation officials to let him leave the country the next year to work as a computer consultant to the gaming industry.

He returned to Antigua and continued to operate his illegal gambling operation from there, prosecutors say. In August, Eremian and another brother, Daniel Eremian, were charged with racketeering, money laundering, operating an illegal gambling business, and filing false tax returns.

Wyshak said the operation initially involved not only the two brothers but also their father, now deceased, and John Chew, Patrice Tierney’s son from a previous marriage.

After Robert Eremian returned to Antigua in 2003, Patrice Tierney began overseeing his Massachusetts affairs. Between 2003 and 2009, prosecutors charge, she handled his bank account, paying all the bills, balancing the books with accounting software, and helping Eremian’s tax preparer with her brother’s tax returns.

Prosecutors are not accusing her of profiting from the arrangement but of “willful blindness’’ to the type of business in which her brother was involved.

If the case went to trial, said Wyshak, the government would prove that Patrice Tierney “deliberately ignored those red flags.’’

The congressman issued a statement Tuesday saying that his wife, like the federal and probation officials who let Eremain leave the country, believed her brother’s statements that he was pursuing a career in software. Yesterday, he told the Globe that he was aware of his wife’s involvement with her brother’s finances but that he was not aware of the particulars.

“I knew my wife was helping her brother’s family; I didn’t know specifics,’’ he said.

After accompanying his wife to the court hearing, Tierney spoke only briefly to reporters outside the courthouse, instead referring to the written statement he released Tuesday. “Today’s not about me,’’ he said. “I’m here in support of my wife.’’

Patrice Tierney, 59, of Salem, wore a tidy blue suit and drop-pearl earrings to court and spoke so softly that she could barely be heard. She was represented by Donald K. Stern, who served as US attorney in Massachusetts from 1993 to 2001 and who now handles litigation and white-collar crime.

The judge asked her to confirm her intention to plead guilty and asked her whether she was pressured into her plea. “I have to know that you know what you may be getting yourself into,’’ Young said. “You’re the one in the driver’s seat, not your family, not Mr. Stern.’’

The judge repeatedly warned her of the rights she was waiving with her plea: She could not recant or plead the Fifth Amendment in any ongoing investigation, he warned, and the judge need not agree to the plea deal offered by prosecutors: two years of probation with 90 days home detention, as well as a $2,500 fine and $400 in court costs.

“This is your deal with the government,’’ Young said. “I’m not part of that. I can put you in prison for six months.’’

But Patrice Tierney said she was taking responsibility for her involvement. Asked about her mental condition, she acknowledged being treated for depression and anxiety and taking medications to relieve them. But she said she understood the charge against her.

“I’m charged with willful blindness to tax fraud,’’ she said.

She was released on personal recognizance with a sentencing scheduled for Jan. 13.