Arrest made in Mattapan killings 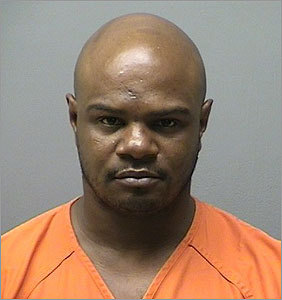 Boston police have arrested a Dorchester man in Manchester, N.H., in connection with the killings of four people, including a toddler in Mattapan, police and prosecutors said late last night.

Kimani Washington, 35, has not been charged with murder, but he was charged with unlawful possession of a firearm and ammunition, and receiving a stolen motor vehicle, police said. He was alone, dressed in jeans and a T-shirt, when he was apprehended in an apartment complex at 69 Eastern Ave., Manchester police said.

Manchester police said he will be arraigned in Manchester District Court Monday. He is being held at the Hillsborough County House of Correction as a fugitive from justice, said Manchester police Lieutenant Detective Peter Bartlett.

Washington was apprehended by the Boston Police Fugitive Unit and homicide detectives, Elaine Driscoll, spokeswoman for the Boston police, said.

Delorise Flonory, the grandmother of one of the victims, Eyanna Flonory, said she was thrilled to learn of the arrest.

“It makes me feel good if they got the right one,’’ she said in a telephone interview. “It’ll make me feel even better when they get them all.’’

Five people were found shot on Woolson Street in Mattapan early Tuesday morning. One of them was Eyanna Flonory’s 2-year-old son. A fifth victim is clinging to life in a Boston hospital.

The arrest was the latest development in a case that has shocked the city for its brutality and the age of the youngest victim, Amanihotep Smith.

Police began closing in on Washington soon after the shootings.

On Wednesday, one day after police responded to the shootings, officers went to the home of Washington’s stepfather, Charles Collins, less than 2 miles away on Fowler Street in Dorchester.

There, they recovered a weapon believed to be linked to the killings, according to Collins and law enforcement officials.

Collins said officers came to his apartment in the three-family home with a search warrant and told him he had to wait outside as they looked for evidence in connection with the shootings.

Some time after midnight, the officers left, but not before telling him they had found a weapon in his 16-year-old son’s bedroom, Collins said.

“I couldn’t understand why they wanted to search my house,’’ he said. “I never figured there would be a gun in my house.’’

Collins said his son was not arrested or questioned, but he immediately worried about Washington, who, he said, often leaves his belongings in that room.

Early on Tuesday morning, Washington had come to the apartment and went into his brother’s room briefly, Collins said. He then went out on the balcony to talk to someone for about 15 to 20 minutes, he said. Then he left in a car Collins said he did not see.

Since then, Collins said, neither he nor his wife have heard from him.

“We’re concerned,’’ he said. “He’s not answering his cellphone at all.’’

Washington has done time in prison for assault and drugs, his stepfather said.

Several law enforcement officials with knowledge of the case said that the Fowler Street house was one of the locations searched in connection with the killings.

Yesterday, police were searching 23 Sutton St., the home of Simba Martin, one of the four people fatally shot shortly after 1 a.m. on Tuesday. Martin, 21, was found naked on Woolson Street.

The names of those killed were released officially yesterday by authorities.

“He opened his eyes,’’ his stepbrother said yesterday, adding that the family has not given up hope that he will pull through. Police have said he is not expected to survive.

Police Commissioner Edward F. Davis has said that police recovered significant evidence from a location he declined to identify. Mayor Thomas M. Menino confirmed Thursday that police had found at least one gun connected to the killings.

Police also recovered evidence from a Edge that Hurd had driven to the scene of the crime. That is the vehicle Washington is charged with receiving as stolen.

Before he fell unconscious, Hurd said that he had gone to the neighborhood to buy marijuana and that whoever shot him had taken the car.

Yesterday, two law enforcement officials said officers found that car within hours of the shooting. It was parked in Grove Hall, about 3 miles from the crime scene.

Near the car lurked Washington, who was behaving suspiciously, the officials said, speaking on condition of anonymity because they are not authorized to talk to the media.

The officers interviewed Washington, who was cooperative and agreed to be questioned at headquarters, they said. He was eventually released because there was not enough evidence to hold him, the officials said.

They obtained the search warrant yesterday, three days after they seized the home. Officials have said they believe that whatever led to the shooting originated at Martin’s home.

Officials have told the Globe they are looking into whether the shootings were the result of a drug encounter gone wrong.

Flonory was found shot in the head, holding her son, who had wounds to his chest and arm, according to an official.

On Woolson Street yesterday, dozens of residents of the neighborhood visited two makeshift memorials set up on chain-link fences, marking the spots where the four victims fell.

Marina Brooks, 18, said she would like to move away, but her family cannot afford to do so now.

“There’s always shootings down there, down there, and down that street,’’ she said, pointing in three different directions.

Woolson Street resident Marie Odney said her son was killed in 2006 near the place where the bodies of the newest victims were found this week. She said she has learned to live with the fear that comes with routinely hearing gunshots.

Cardinal Seán P. O’Malley, archbishop of Boston, offered prayers for the victims’ loved ones on his blog last night.

“We are very distressed by the violence in the city,’’ he said. “Life is precious, and we must never stop proclaiming that message, particularly to our young people.’’