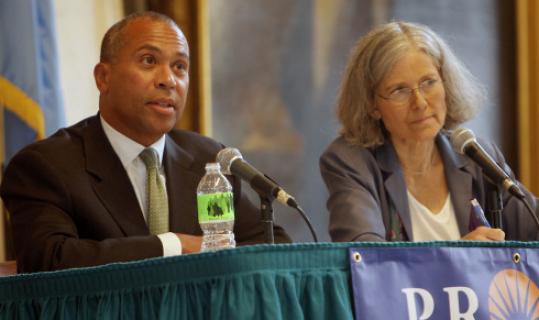 For weeks, Republican gubernatorial candidate Charles D. Baker has been attacking both independent rival Timothy P. Cahill and Governor Deval Patrick, a Democrat, over taxes and spending, trying to persuade voters that the “Patrick-Cahill’’ administration has been bad for taxpayers.

Yesterday, Patrick turned the tables, painting Baker and Cahill as a fiscally reckless duo whose plans to cut the corporate, income, and sales tax rates to 5 percent would do as much damage to the state budget as a ballot question to roll back the sales tax, which all four gubernatorial candidates oppose.

Baker defended his tax-cut proposals. Unlike the sales tax rollback from 6.25 percent to 3 percent, which would take effect Jan. 1 if passed by voters in November, he said, he would have four years to implement his tax reductions. Baker, who has proposed 13 cost-saving measures for state government, including slashing 5,000 jobs from the state payroll, also pointed out that the state is facing an estimated $2 billion budget deficit next year, which he said was a result of the governor’s fiscal mismanagement.

“My view is we need to cut taxes and make Massachusetts more affordable and more competitive,’’ Baker said in an interview after the forum. “We’ll have to do that over the course of a Baker administration, and that’s my plan.’’

The forum, held before hundreds of human services workers and advocates, showcased policy and stylistic differences among the candidates, and they delivered some direct jabs at the perceived weaknesses of their rivals. The hourlong event — sponsored by the Providers Council, a group representing social services providers — was moderated by Karen Holmes Ward, a WCVB-TV host.

All the candidates pledged, in their own way, to support workers who care for the elderly and disabled, as well as the families who rely on state services. Decrying the average salary of $12 an hour for human services workers, Cahill proposed a “Quinn bill for direct care workers,’’ modeled on a state program that has been deeply cut in recent years, which awards salary increases for police officers who earn college degrees.

“We have to put them on the level of teachers and police officers,’’ Cahill, the state treasurer, said of social services workers. “They are as important, if not more important, than those professions.’’

Jill Stein, the Green-Rainbow candidate, highlighted her plans to eradicate millions of dollars in state tax incentives for large corporations and direct the money to human services workers. She also proposed moving toward a single-payer health care system, which she likened to a “Medicare-for-all system.’’

Baker said his goal is to streamline the state’s health and human services agencies, which he repeatedly called cumbersome and needlessly complex for workers and families who need services. He said that tackling the constellation of agencies is “like eating an elephant; you have to do it one bite at a time.’’

“One of the biggest losers in the current system is the direct care workers,’’ said Baker, who served as health and human services secretary under Governor William F. Weld in the 1990s. “We need to consolidate the operating model and make sure some of that money finds its way into the community.’’

Patrick sought to highlight his personal connection to human services workers, contrasting that to Baker’s emphasis on the dry details of policy and program costs. Patrick said his approach is not about “me acting like I’m smarter than you.’’

Patrick said he had “stopped, sat, listened, and held hands’’ with human services workers even when they staged a sit-in outside his office to protest budget cuts.

“I have not brushed past you once,’’ he said.

Stein, criticizing Patrick for cutting human services during the economic downturn, said it was not enough for the governor to talk about supporting those who care for the neediest residents in the state. She said voters must decide “whether we want oratory and beautiful sentiments from our leaders, or we want results.’’

Meanwhile, Baker’s campaign slammed a new advertisement that Bay State Future, a group affiliated with the Democratic Governors Association, is running on Patrick’s behalf. The ad accuses Baker, by signing a no-new-taxes pledge, of supporting tax breaks for companies that export jobs overseas.

Factcheck.org, a nonpartisan fact-checking organization, has labeled such ads false.

Baker called the ad, which was not produced in coordination with Patrick’s campaign, an attempt to distract from the governor’s failed policies.

“If I had the governor’s record, I’d love to change the subject, too,’’ he said.