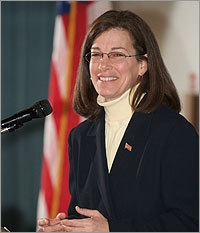 Mary Z. Connaughton (above), the Republican candidate for state treasurer, said she wanted to evaluate employee qualifications if elected while her Democratic opponent Suzanne Bump said she wanted to keep a free hand in staffing the agency.
By Alan Wirzbicki Globe Staff / September 29, 2010

Republican auditor candidate Mary Z. Connaughton, in a televised debate last night, appeared to back off her earlier opposition to a controversial ballot initiative that would slash the state’s sales tax, saying she was undecided about the measure.

In an exchange with Democratic nominee Suzanne Bump on NECN, Connaughton was asked about her stance on Question 3 and said, “I’ll make that decision as it comes.’’

As recently as two weeks ago, Connaughton said, “I won’t be voting in favor of Question 3,’’ citing its impact on state finances.

Question 3 would cut the state sales tax rate from 6.25 percent to 3 percent, which would open a $2.5 billion hole in the state budget and lead to layoffs and deep cuts to state and local services. A Globe poll released this week found that voters are split on the issue, with 46 percent in favor of cutting the tax and 43 percent opposed, with the remainder undecided.

In a television appearance Sept. 16, Connaughton had aligned herself with the no camp. “My concern is that it’s not going to foster spending cuts,’’ she said. “Question 3 has an enormous effect on the budget.’’

“She’s not reversing her position at all,’’ Flynn said. “What she really wants is a 5 percent sales tax, but that’s not on the ballot. This is not, for Mary, a black-and-white issue.’’

The debate, moderated by NECN’s Jim Braude, was a rare showcase for the candidates for auditor, the state official in charge of investigating waste, fraud, and abuse in state government. Connaughton and Bump are vying to replace Democrat A. Joseph DeNucci, who is retiring after 24 years in office.

DeNucci drew criticism this summer when he approved 5 percent raises for his staff, even as the state suffers from high unemployment and as many state employees face stagnant wages and layoffs. Both candidates criticized the raises yesterday, but neither promised to rescind them if elected on Nov. 2. Connaughton said she wanted to evaluate employee qualifications if elected, and Bump said she wanted to keep a free hand in staffing the agency.

“I’m looking at this not as a politician,’’ Bump said. “Looking at this situation as a prospective manager . . . you need to have all the management flexibility that you can have.’’

“You need to be an attorney to be the attorney general,’’ she said. “Shouldn’t you be an auditor to be the state auditor?’’

But Connaughton sidestepped several questions, including on gay marriage and state pensions.

Pressed by Braude, she defended her past work as a lobbyist for and an insurance industry trade group, where she advocated for changes to workers’ compensation laws.

“We did good public policy work,’’ she said. “I’m proud of the work I did for the American Insurance Association.’’

Nathanael Fortune, a Smith College associate professor of physics, is also in the race as a Green-Rainbow Party candidate.