A father’s unbearable loss became his cause — banning cellphone calls by young drivers, and texting by all 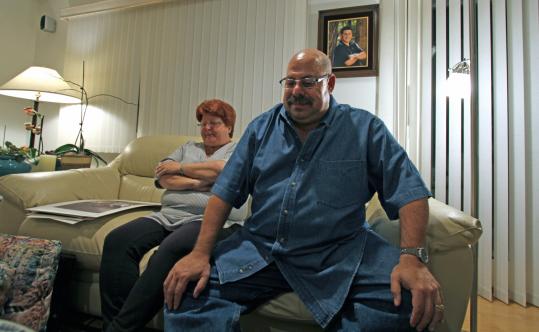 Jerry Cibley was on the phone with his son when the teen was killed. He and his wife, Jeri Katz, want tougher laws. (Barry Chin/Globe Staff)
By Eric Moskowitz Globe Staff / September 26, 2010

FOXBOROUGH — They saw themselves as two of a kind, Jerry and Jordan Cibley, father and son.

They loved photography, gadgets, and full moons. They cracked each other up with renditions of “The 2,000-Year-Old Man,’’ the Mel Brooks-Carl Reiner comedy routine. As a boy, Jordan said he wanted to go bald when he grew up, to be just like his dad. At 15, he became best man at his father’s wedding. At 18, he never stopped his dad from kissing him good night.

And then the father buried the son.

Police think Jordan Cibley dropped his cellphone, undid his seat belt to fish for it, and swerved into an oak tree. He died on impact.

He had been talking to his dad.

Now Jerry Cibley is a man on a crusade, emerging in the past three years as a leading spokesman for tougher laws against phone use in automobiles. He used to own a chain of eight cellphone stores. Now he sells real estate, and computerized cash registers to restaurants. But he spent more of his time this year speaking out — to school groups, to strangers, to lawmakers, to Oprah Winfrey and her national audience.

The Massachusetts Safe Driving Act that takes effect Thursday, banning cellphone use by drivers under 18 and texting by all drivers, stopped short of what Jerry Cibley wanted, but it is a significant step.

“I had to somehow save some lives,’’ he said last week, sitting beneath the framed portrait from the senior year his son never got to finish. “If he had not been on his cellphone that day, he would be alive, and he would be here.’’

When Jordan died in 2007, Cibley had no guidebook for his grief, and he could not suppress his gregarious side. He knew other parents who had lost children and become withdrawn, who had preserved their son or daughter’s bedroom forever, down to the stray socks and scattered magazines. That wasn’t for him. He donated Jordan’s clothes, gave away his bed, and turned his room into a den. (“Jordan would have loved the flat screen,’’ he said.) And he became an advocate.

After his son died, he had not yet started to sit shiva, the Jewish week of mourning, when the first reporter called. “I do not want my son to die in vain,’’ he found himself saying. “We need legislation to stop children from talking on cellphones while the car is in motion.’’

On the eve of the funeral, he went on the radio, talking about the dangers of distracted driving, and stayed on nearly two hours.

He has told Jordan’s story over and over, hoping to change policy, and behavior. He especially likes speaking to children, believing that the education campaign must begin well before drivers’ ed.

He always asks students how many have seen their parents talk on the phone or text while driving. Most hands go up.

“We need to bring this into the home,’’ he said. “We need to get parents to understand the incredible danger.’’

He joined the board of the Safe Roads Alliance, a Massachusetts nonprofit. He spoke alongside US Transportation Secretary Ray LaHood at MIT, and he was there at the State House when Governor Deval Patrick signed the Safe Driving Act.

“We wanted to do something positive in his memory,’’ said Jeri Katz, Jordan’s stepmother, who has become a safe-driving champion at Bridgewater State University, where she is a special education professor.

On the last night of his life, Jordan put on a tuxedo and went to his high school prom. As usual, he had his camera, and his ear-to-ear smile.

The next day was Mother’s Day. Jordan went to brunch with his father and stepmother at a Sharon deli, edited some prom photos onto a CD, and jumped into the car to bring the disk to a friend.

At half past 4, Jordan’s phone rang. It was his stepmother, wondering if he had that morning’s paper. Then his father got on the line, just to say hello.

He told himself Jordan’s phone battery must have died. But soon, there was an officer at the door.

At home now, Jerry spends most of his time in what used to be Jordan’s room. The other day, he pulled out a portfolio of his son’s photography and graphic design work, flipping through pieces that had won art awards or appeared in the student newspaper.

He stopped on a poster that Jordan had designed, just a few weeks before his death, as a tribute to the victims of the Virginia Tech massacre. Jordan had no direct connection to the campus, but the story had shaken him.