In killing of family, words of shame, pent-up rage 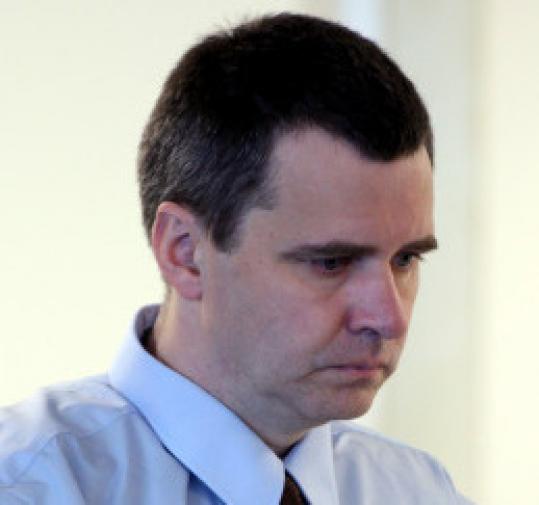 Hours after his wife confronted him about bouncing a $2,499 check to the IRS, Thomas J. Mortimer IV killed her, their two children, and his mother-in-law in their Winchester home and then typed a confession in which he blamed himself for “bottling up my anger . . . until one murderous night,’’ according to a case summary by prosecutors released yesterday.

“What I have done is extremely selfish and cowardly,’’ the 43-year-old sales executive allegedly wrote in a chilling confession after he cut his children’s throats and stabbed his wife, Laura Stone-Mortimer, and her mother, Ragna Ellen Stone. “I took the easy way out. . . . I am ashamed, frightened, relieved, surprised that I murdered my family, disgusted with myself.’’

The typewritten note, found when police searched the home after receiving an anxious call from Stone-Mortimer’s sister, provides an unusually intimate look into what investigators say are the turbulent reflections of a man accused in one of the most brutal homicide cases in Massachusetts in recent years. As the legal case proceeds, the letter is all but certain to play a pivotal role, as evidence that could be used to support or debunk a potential insanity defense.

As the bodies of his family lay nearby, prosecutors say, Mortimer wrote that he should have handled the situation more maturely by divorcing his 41-year-old wife of nearly seven years. But his 4-year-old son, Thomas Mortimer V, and 2-year-old daughter, Charlotte, “are in a much better place than they could ever be living with Laura and living with me,’’ he wrote.

“Looking forward to peace but already missing terribly Finn and Charlotte,’’ he added, using his son’s nickname. “That will be my ‘hell.’ ’’

Excerpts of Mortimer’s purported confession were contained in a graphic nine-page summary of the case that was made public yesterday at the request of The Boston Globe and the Associated Press.

Middlesex County prosecutors filed the summary in Superior Court earlier this month, but Mortimer’s court-appointed lawyer, Denise Regan of Salem, persuaded a judge to seal it on the grounds that it would hurt her client’s chance of getting a fair trial.

The news outlets appealed to the state Appeals Court, which yesterday unsealed the document but withheld four lines that Regan has opposed to being made public. Those lines are expected to be unsealed tomorrow unless Regan appeals to the state Supreme Judicial Court.

Regan said yesterday that she had not decided whether to appeal, and declined to comment about the summary.

Not long after the bodies were found on June 16, authorities said, Mortimer had written letters confessing to the crime and describing marital and financial problems. But the summary by prosecutors for Middlesex District Attorney Gerard T. Leone Jr. is much more specific, and indicated that a squabble about a bounced check might have precipitated the crime.

Leone paraphrased one of the letters in June, saying Mortimer wrote, “I murdered my family.’’

Throughout their marriage, Stone-Mortimer worked as an economist for CB Richard Ellis, a Boston commercial real estate services company. Mortimer had held sales jobs for a number of businesses and had been unemployed for about 18 months before the killings, prosecutors said. But he had just started working as a senior sales account executive for M&R Consultants Corp., a Burlington technology consulting firm, two weeks prior to the slayings.

The couple and their two children had lived for five years with Stone-Mortimer’s mother, who was 64 when she was killed, in Stone’s house in Winchester.

On June 14, Mortimer’s parents traveled from their home in Connecticut to Winchester to baby-sit Finn and Charlotte while Mortimer and Stone-Mortimer were at work. Shortly before 6 p.m., Stone-Mortimer arrived home and was “observed to become distressed’’ after opening a letter from the Internal Revenue Service, prosecutors said.

The letter said her husband had bounced a $2,499 check for payment of their taxes, the summary said. A moment later, Mortimer called to say he was on his way home from work. His wife asked him about the check, but the conversation was brief.

When Mortimer arrived home, his wife brought up the bounced check in front of her in-laws and her children. “The defendant remained calm and told his wife that everyone was hungry, this was not the time or place to discuss this and it could wait until after dinner,’’ wrote prosecutors. “The family then ate dinner and everything seemed to be okay.’’

His wife and his son were found June 16, lying in pools of blood in the family room.

His mother-in-law was found in the living room under a rolled-up Oriental rug. It appeared that she had been attacked at the front doorway as she tried to get out of the house, dragged into the living room, and covered with the rug, prosecutors said.

His daughter was found lying in a pool of blood in her crib on the second floor.

Later that morning, Mortimer called work and left a voice mail saying he would not be in, prosecutors said. He also called his son’s preschool in Lexington and said Finn was home sick.

He took a call — on his wife’s cellphone — from her sister, who wanted to firm up weekend plans to visit their father on Martha’s Vineyard. Mortimer told her sister that Stone-Mortimer could not come to the phone, and “it will be a while’’ before she could call back, prosecutors said.

Mortimer apparently tried to kill himself after the killings, prosecutors said. A car in the garage had two garden hoses connected to the tailpipe and taped inside the windows on the other end. On the front passenger seat, investigators found a knife, a hammer, and a bottle of vodka.

But Mortimer fled Winchester, prosecutors said. He was arrested in Bernardston on June 17 by the police chief. The chief spotted Mortimer driving his sport utility vehicle after authorities had sent out an alert.

While being booked at the Bernardston police station, prosecutors said, he called his parents. He apologized to his mother for making a mess of his life and for “wrecking everyone else’s lives,’’ said the summary.

“He claimed he just lost it, and, when she asked if he snapped, he said, ‘Yeah,’ ’’ prosecutors said.

Regan has said Mortimer’s mental health will be an issue in the case.

John R. Ellement of the Globe staff contributed to this report. Jonathan Saltzman can be reached at jsaltzman@globe.com.