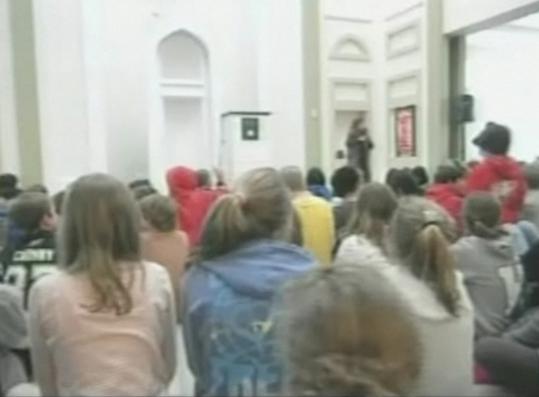 WELLESLEY — This affluent suburb found itself cast squarely into the culture wars yesterday, as controversy engulfed school officials over a field trip to a Boston mosque where several sixth-grade pupils were videotaped kneeling during a prayer service.

As blogs and talk radio programs raged over whether the school should have allowed the trip, the mosque issued a statement saying there was no attempt to coerce the children and accusing critics of fear-mongering. The influential American Jewish Committee called for tighter guidelines for educational trips to religious settings, and First Amendment advocates said such outings ominously blur the divide between church and state.

But those who had the greatest cause for anger, parents of Wellesley students, emerged as the school’s most vigorous defenders. At coffee shops and in school parking lots, they insisted that the visit to New England’s largest mosque was a valuable educational experience that would help children gain an understanding of the Muslim faith. The backlash against the visit, many said, underscored the need for such exchanges.

“It was just a simple prayer,’’ said Marijane Tuohy, a 56-year-old who accompanied her sixth-grade daughter on the May trip. “I think the students were just trying to experience it. They weren’t being indoctrinated. If anything, it was just the opposite.’’

On Thursday, a group critical of the Islamic Society of Boston Cultural Center released the recording, taken by a parent who chaperoned the field trip. That prompted a quick apology from the superintendent of Wellesley schools, Bella Wong, who said teachers should not have allowed pupils to take part in the midday prayer service, and she regretted “the offense it may have caused.’’

That didn’t stop the controversy from escalating into the latest skirmish in the national debate over the place of Muslims in American society. A number of religious freedom advocates said that visiting a mosque during midday prayer services put impressionable students in a delicate situation.

“It’s very important that public schools not put students in a position where they feel obligated or pressured to participate in worship and that they never be subject to proselytizing,’’ said Joe Conn, a spokesman for Americans United for Separation of Church and State, a Washington, D.C., education group. “The bottom line is the school fell down in its responsibility.’’

Other groups said the episode exposed the need for vigilance on public school visits to churches, synagogues, and mosques, and the American Jewish Committee’s Boston office called upon state and local education officials to develop safeguards to prevent similar incidents.

“State-run organizations have an added burden to ensure that they do not directly or indirectly favor, endorse, or disparage religious teachings or practices of any community,’’ said Rob Leikind, director. “When a public school takes children to a church, synagogue, mosque, or other religious institution, they no longer have control over the environment.’’

Wong, who did not return phone calls seeking comment yesterday, said in a letter to parents that teachers anticipated that prayer services would coincide with the pupils’ visit, but made “an error’’ in allowing the children to take part.

The field trip was part of a required social studies course, “Enduring Beliefs and the World Today,’’ which introduces students to world religions. Students had earlier visited a synagogue, attended a gospel music performance, and met with Hindus.

In response to the escalating controversy, the Muslim American Society of Boston, which operates the mosque, condemned the group Americans for Peace and Tolerance for releasing the video. Bilal Kaleem, president of the group, said the heavily edited footage created a misleading impression that the mosque coerced the students into prayer.

“At no point did we attempt to proselytize students, or teach them how to pray, or even invite them to pray,’’ Kaleem said. “Each month about 15 schools, churches, and synagogues reach out to us requesting tours and requesting to see a Muslim prayer. The visit from Wellesley was no exception.’’

In her letter to parents on Thursday, Wong said a representative of the mosque told pupils they were welcome to join in the prayer.

Kaleem accused the head of the group that released the video of fomenting anti-Muslim sentiment, and said the video was taken without the permission of the school, parents, or children.

The video was part of “an orchestrated campaign,’’ Kaleem said, to raise suspicions about the mosque.

Tuohy did not see how the boys joined the prayer service, but speculated they participated as a sign of respect.

“I think they were just trying to be immersed in it,’’ she said.

The video, taken from across the room, shows the boys rising to their feet with a line of male worshipers. Tuohy said the rest of the class was observing the prayers.

Tuohy said she understood the church-state concerns, but likened the visit to a tour of a cathedral during prayer services.

But critics said the pupils’ participation in prayer clearly crossed a line.

“Public schools need to have clear guidelines that these field trips are for educational purposes only,’’ said Charles Haynes, a senior scholar at the First Amendment Center. “If it’s a school-sponsored activity, it may not involve religious practice.’’

Simply observing prayer services, Haynes and others said, was problematic.

“I think it’s too close to participation for comfort,’’ he said. “Observing is a gray area, but these are sixth-graders. They are in a place of worship with worship going on, and I think that crosses the line.’’

In milder terms, educators agreed. Paul Andrews of the state’s Association of School Superintendents said the controversy served as a cautionary tale.

“It sends up a little bit of a warning signal that we need to be more aware of this,’’ Andrews said.

“You can understand the sensitivity.’’

Editor’s note: An earlier version of this story inappropriately used material from a story published on a local website. Comments attributed to parents Ute Smith and Mary Crown were taken from an article that first appeared Friday morning on Patch.com's Wellesley site. The quotes have been removed. Their use was a violation of the Globe's journalistic standards.

Globe correspondents Katrina Ballard and Sarah Thomas contributed to this report. Peter Schworm can be reached at schworm@globe.com