Campaigning, they cite history of vote 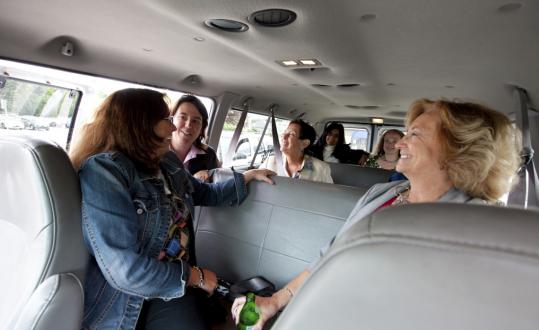 MARLBOROUGH — Senior women legislators fanned out across the region yesterday in support of freshman female representatives facing election challenges, saying the push was particularly significant in this 90th anniversary year of the 19th Amendment, which gave women the right to vote.

“The whole point of supporting other women is to make sure that they feel they are supported and that they can run for office,’’ said Patricia Haddad, a Somerset Democrat who is the assistant majority whip of the House.

Traveling in a bus that shuttled them from Hudson, Marlborough, Framingham, and Bellingham, the women held a roundtable discussion and stood on street corners and at rotaries holding signs for the candidates, smiling and waving at passing motorists.

For the women, the electoral push comes at a time when women’s toehold in the Legislature — they hold 26 percent of the 200 seats — is threatened by a wave of women leaving office. There are six women departing the House and three women the Senate. In one of those districts — that of state Senator Joan Menard of Fall River — no woman is running for the open seat.

The departures leave open the possibility that the Legislature could see a net loss of women — a change that would mark a comedown from 2009, when women made up the largest percentage of incoming freshmen in recent memory. Women also hold a record number of leadership positions, serving as committee chairs and vice chairs, as well as members of the speaker’s leadership team, according to Haddad.

Massachusetts lags behind a number of other states in its percentage of female state legislators. According to the National Conference of State Legislators, New Hampshire claims the largest contingent, with 37.3 percent of its legislative members female. Next up is Vermont with 37.2, Colorado with 37 percent, and Minnesota with 34.8 percent.

In Massachusetts, as of 1979, only 7.5 percent of legislators were women. By the late 1990s, women had grown to be a quarter of legislators — but that figure has remained virtually unchanged, according to the Center for Women in Politics and Public Policy at the University of Massachusetts at Boston.

“We are not where we would want to be in terms of equal representation,’’ said Priti Rao, director of the Massachusetts Women’s Political Caucus. She noted that women make up 51 percent of the state’s population.

As part of a push to increase female representation, Rao said that in the anniversary year of the 19th Amendment, a push will be on to involve women in the political process.

“Women supporting women is how we get to equal representation,’’ she said. “Women worked really hard for the privilege so we want to make sure that women are exercising their right.’’

Rao noted that a major hurdle in getting more women elected in Massachusetts lies in persuading more women to run. That task is difficult because women who are just as qualified as men are often more reluctant to run for office, Rao said.

On average, she said, women have to be asked seven times by seven different people before making the decision to run, Rao said.

“They often feel that they are not ready,’’ she said.

Haddad said she often hears from young women that they feel torn between running for office and tending to families.

“We haven’t broken that barrier yet,’’ she said.

Yet, at the same time, women, too, have greater access to campaign funding with their growing professional connections, said Representative Alice Wolf of Cambridge.

“It’s gotten a lot easier for them to raise money,’’ she said as she stood on a Marlborough street corner holding a sign for Danielle Gregoire, one of the freshmen legislators facing a challenger in November.