Cipollinis campaign in both parties for Governor’s Council 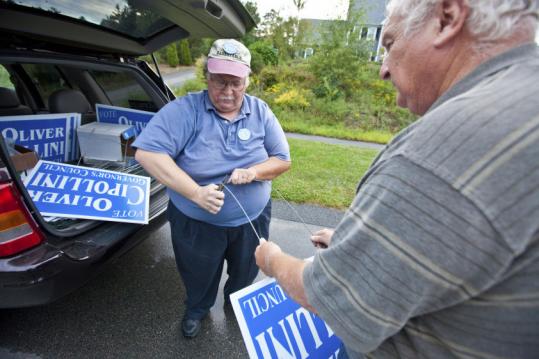 Oliver Cipollini (left) and his brother Charles, both candidates for the Governor’s Council, placed a sign for Oliver outside a Plymouth house. (Aram Boghosian for The Boston Globe)
By Stephanie Ebbert Globe Staff / September 13, 2010

The competition is so thick for the Governor’s Council in Southeastern Massachusetts that seven candidates are vying for the open seat — including two brothers with similar names.

Charles Oliver Cipollini, 68, faces one opponent in the Republican primary.

But the brothers Cipollini are not bitter sibling rivals. Instead, they are campaigning pretty much as a ticket. The like-minded brothers think they have found a way to double their odds of familial victory, by running on both ballots.

“He was my best man and he’s my best friend,’’ Oliver Cipollini said. “We’re really trying to make our community and Southeastern Massachusetts a better place. Two shots are better than one.’’

Charles Cipollini’s first-ever campaign has raised just $100 — a donation he made. He spends his time campaigning for his brother and posting campaign signs for him in their hometown of Fall River, where he still lives.

The Republican thinks of himself largely as election insurance. If his brother loses, perhaps he has a shot of putting a Cipollini on the ballot.

“I have the same views as my brother. I’m like a fallback,’’ said Charles Ci pollini.

It’s an unorthodox campaign for a low-profile position on an advisory panel that pays $26,000 a year and meets once a week, to review judicial nominations, commutations, and pardons, and state spending. But Oliver Cipollini has approached the post with determination. When he unsuccessfully challenged longtime incumbent Councilor Carole A. Fiola two years ago, he spent $59,000 of his own money. Fiola spent less than $36,000 that year.

In recent years, Oliver Cipollini, who lives in Barnstable, has run unsuccessfully for other local posts, including town council, water commissioner, and tax collector.

He is aiming for the Governor’s Council with an eye toward judicial appointments and tough sentencing. “We’re too soft on crime and society is becoming a huge victim,’’ he said.

A retired first assistant clerk-magistrate at Barnstable Juvenile Court, he previously worked as a systems network manager for the state and as a social worker and a counselor. Among his accomplishments he includes an honorable mention for a state budget-cutting suggestion he proposed under William F. Weld, former governor: limiting state employees’ Internet access, for a savings of $100 a worker.

Charles Cipollini, also retired, was a math teacher at Fairhaven High School. He served as a delegate to the 1992 Republican National Convention in Houston, where he voted for Patrick Buchanan over George H.W. Bush and booed Weld’s speech urging the party to embrace abortion rights. He opposes casinos and a liquefied natural gas facility in Fall River.

Familial cooperation is the norm for the Cipollinis, Charles said. His grandfather came from Italy and opened a chicken and turkey farm with his uncle, who lived next door, he said. Charles still lives in the house where he grew up.

Their father died before Oliver Cipollini was born. “My mother never remarried and she taught us to help each other. That’s what we’ve been doing all our lives,’’ said Charles Cipollini.

While Charles Cipollini has just one rival in the Republican primary — Joseph Ureneck, a father’s rights advocate from Dorchester — his brother faces four Democrats.

Mosca, a retired probation officer, said she has the experience and education to know what’s important in choosing a judge, and promises she would use her time on the Governor’s Council to bring constituent concerns to the lieutenant governor.

While it’s conceivable that the brothers Cipollini could both win their primary contests — and compete, brother against brother, in the general election — nobody expects that to happen.

“I hope not. ’Cause that means my brother loses,’’ Charles Cipollini said. “My brother’s more qualified than I, truthfully speaking.’’

Campaigning for the little-known post in such a broad district can be hard, said Fiola, who announced in the spring that she would not run again.

“It’s difficult to get the attention that the other races get,’’ Fiola said. “The geography is so huge. Ours happens to be quite large. It’s very difficult to get that word out. However, I maintain today as I did 10 years ago that it’s an important job. It is the public’s last stop to have any say in these judicial nominations.’’

The nine-member Governor’s Council includes the lieutenant governor and eight councilors who are elected from districts across Massachusetts.

District 1, for which the Cipollinis are vying, covers 45 communities from Southeastern Massachusetts to the Cape and islands.

All eight district seats have contests this year, and Fiola is one of three leaving seats open. The others are District Six Councilor Michael J. Callahan and District Seven Councilor Thomas J. Foley.

In District Six, Democrats Suzanne R. English-Merullo of Winchester and Terrence W. Kennedy of Lynnfield are competing for the nomination against Republican Paul A. Caruccio of Winthrop. Democrat Francis A. Ford of Paxton and Republican Jennie L. Caissie of Oxford are running for the District Seven seat. The incumbent councilors face contests as well.