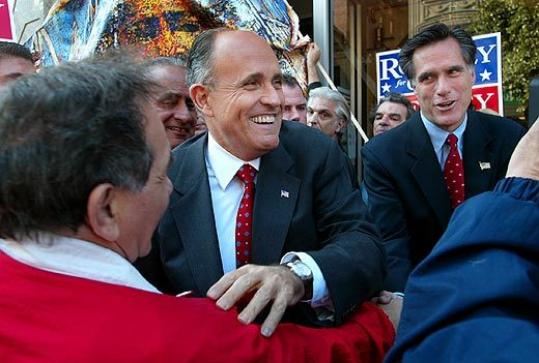 Forgive us if we thought that was file footage we saw on television last week of Rudy Giuliani yukking it up in a North End restaurant with a local candidate, trailed by a crowd of onlookers and a gaggle of media.

There he was in the old Italian-American neighborhood, endorsing Ralph Martin for Suffolk district attorney in 1994. And wasn’t he marching down Hanover Street in a parade with Paul Cellucci in 1998, touting him as our next governor?

And, lo, there he was again, gobbling cannoli with Mitt Romney, helping him win the corner office in 2002. (That was before they became bitter rivals during the 2008 presidential campaign.)

Oh, and “America’s mayor’’ also came to the North End to lead a feisty rally with Scott Brown in January, before Brown surged to victory in the US Senate race.

And, so, congratulations to Karyn Polito, a candidate for state treasurer, who was endorsed by Giuliani at Strega Ristorante on Hanover Street on Thursday.

If history is any guide, you’re in good shape. Giuliani’s candidates are six for six after receiving the former mayor’s reliable North End blessing.

It’s probably time to shake it up, though, Mr. Mayor. How about next time you show a little love to, say, Jamaica Plain, or Southie, or Dorchester? — MICHAEL LEVENSON

Jill Stein does not accept donations from lobbyists. But she is, just for the record, taking free songs.

Greenfield songwriter Tom Neilson has penned a campaign ditty for the Green-Rainbow Party candidate called “Follow the Money.’’ The lyrics poke fun at her gubernatorial rivals who do accept contributions from lobbyists:

The song — yes, it’s folk — urges voters to support Stein, her running mate, Rick Purcell, and the Green-Rainbow candidate for auditor, Nat Fortune. Stein will be singing backup for the song’s live premiere Thursday night in Shirley. (You can listen to the piece at www.jillstein.org/music.)

State Representative Jeffrey Perry, a Sandwich Republican, has made his tough stance against illegal immigration a centerpiece of his bid to replace retiring US Representative William Delahunt in the state’s 10th District.

But former state treasurer Joseph Malone, who is battling Perry in a bitter Republican primary that will be settled on Tuesday, has been insisting that he’s just as tough.

To prove his bona fides, Malone is calling on the man who calls himself America’s toughest sheriff: Joe Arpaio, of Arizona’s Maricopa County. Arpaio, a Springfield native, endorsed Malone Friday with the plea that “Arizona needs Joe Malone in Congress almost more than the good people of Massachusetts’’ for his willingness to support that state’s enforcement actions in the face of federal opposition.

Arpaio has won both hero and villain status for carrying out sweeps of Hispanic neighborhoods and jails in search of illegal residents, and forcing male inmates to wear pink underwear. The US Justice Department announced this month that it is suing him for his failure to cooperate with an investigation that his department has systematically violated the civil rights of Hispanics.

But Arpaio has been popular with those who feel the federal government has failed to protect its borders, and his embrace of Malone is a blow to Perry’s courtship of voters fed up with illegal immigration.

Arpaio, in one of the odder trends this election cycle, is the second Arizona sheriff to back Malone’s candidacy thousands of miles away.

“It speaks volumes in terms of their confidence in me that I will go down to Washington and not only support their cause but fight for their cause,’’ Malone said in an interview. —NOAH BIERMAN

Tweet of the week
Well, primary week is finally upon us, bringing with it the ritual of culling and winnowing. Many candidates will go home Tuesday night; the ones who remain will fight on to November. Last Tuesday, Democratic Party chairman John Walsh (@JohnEWalshDem) wrote of the gubernatorial debate, “It is about choices,’’ a simple sum-up that also applies to the ballot box. This year, the big question is whether Republicans will roar. A Tweeter calling herself @conservagirl asked Friday, “More Massachusetts Miracles in the Making?’’